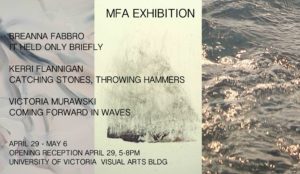 Always looking for a new way to present work, the Department of Visual Arts has changed the format of their annual exhibition by graduating students of their MFA program. Rather than presenting one large exhibit featuring all the graduating MFA students, this year’s exhibition has instead been split into two different sections. The first, a three-week rotating Solo Series, ran in March; now, the final three exhibitions by graduating MFA artists Kerri Flannigan, Breanna Fabbro and Victoria Murawski will be on display.

The exhibit opens with a reception from 5 to 8pm Friday, April 29, and then runs noon-4pm daily to May 6 in the Visual Arts building. 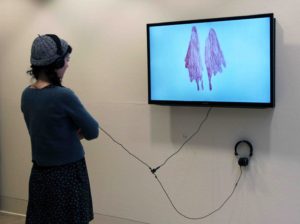 Kerri Flannigan’s Catching Stones, Throwing Hammers uses drawings and archival footage to map the exterior of Woodlands, a now-defunct institution for the intellectually disabled, using changes wrought to the building’s façade since the mid-19th century to explore the institutional borders of exclusion. Flannigan is a Victoria-based interdisciplinary artist who explores methods of experimental narrative and documentary through drawing, writing, projection, and performance. She has shown locally and internationally, and is a recipient of the Best English Zine at the Expozine Awards (2011 and 2014) and runner-up to the inaugural Lind Prize (2016).

As part of her thesis defence, Flannigan will also present The Secrets of Naming Clouds, a performance accompanied by moving image work, projections, sound and live-narration; this 40-minute performance begins at 6pm on Thursday April 28 at the Intrepid Theatre club (2-1609 Blanshard), with thesis defense to follow. The performance itself will draw on utopic universal languages such as Blissymbols, an “anti-word” language designed to eradicate miscommunication and Láadan, a feminist language created to end patriarchy. These idealized forms of communication are interwoven with coming of age stories; home videos and choreographed dances, dating bans, classroom conversations on consent, teen-girl vigilantes and a family trip to LA in pursuit of minor celebrity Adam Sessler, my sisters crush.

Breanna Fabbro’s “It Held Only Briefly”

Breanna Fabbro’s It Held Only Briefly is a series of paintings that depart from the normative apperceptions of still-life in the traditional understanding of an object sitting still in space, but accede the moments before an object meets its final position. Objects are constructed out of shredded canvases and given life through actions such as tearing, raveling, and tossing. These moments of suspended motion are mobilized through painting the memory and experience of interactions with the objects as it relates to the space or scenario it is set against.

Apropos to life and mortality in the still-life canon, these works are a return to life and its inherent momentum, subsumed by discovery, failure, and regeneration. Objects in the world are alive – we make them alive with our constant interaction with them. Like food in still-life paintings that depict decay, all objects have a life. Fabbro’s work depicts that movement and process of coming and becoming. 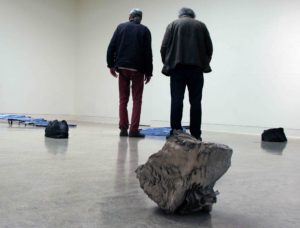 Victoria Murawski will also present her work in the exhibit, Coming Forward in Waves.