Alex Plouffe has always been drawn to Shakespeare

Some people just seem born for the parts they will play in life. Such is the case with Department of Theatre student Alex Plouffe, the 2010 recipient of the Nigel Leach Memorial Scholarship. Indeed, while most students tend to dread their encounters with the works of William Shakespeare, Plouffe simply couldn’t get enough of the Bard. 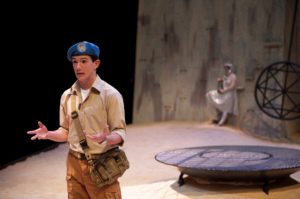 “As a child, and all through my life, I have always felt drawn toward Shakespeare. The unparalleled way his language strikes at the core of human emotion . . . has awed and inspired me for as long as I can remember,” says Plouffe. As such, he was a natural choice for the Leach Scholarship. “I cannot begin to tell you how thrilled and honoured I was to receive this award. I feel incredibly lucky to have been recognized for what has been my passion throughout my life.”

Nigel Leach graduated from the Phoenix in 1988 and died in 1993 after a long illness from cancer. But his friendliness, liveliness, fortitude and love of Shakespeare live on through the Nigel Leach Memorial Scholarship, awarded annually to a third-year acting student who displays outstanding promise in Shakespearean interpretation and is continuing in the theatre program.

Previous winners include Victor Dolhai (who went on to appear at the Stratford Shakespeare Festival), Sara Pelzer (who toured with the award-winning musical Ride The Cyclone), Taylor Lewis (co-producing artistic director, Nelson History Theatre Society) and Eva Markvoort (65 Red Roses), who died tragically from Cystic Fibrosis in 2010. Each year, Christine Leach presents the current scholarship winner with a red rose in memory of Nigel — a living memorial that was this year handed to Plouffe.

While the Calgary-born actor moved to Victoria in 2007 specifically to pursue his BFA at UVic, he actually played his first Shakespearean role in a summer camp production of Twelfth Night when he was 11. Little did Plouffe realize the impact this early role would have on him. “Books on the Bard — who he was, what his life was like — filled my room and occupied most of my time in high school.”

It’s a passion that has continued here at UVic, where Plouffe played the role of Paris (the other doomed suitor) in Phoenix’s bold version of Romeo & Juliet. Directed by Brian Richmond and featuring costumes by Royal Society fellow Mary Kerr, the November 2009 production was transposed from Italy to a war-torn Middle East, with Plouffe’s Paris now envisioned as a UN peacekeeper.

“Through the Phoenix Theatre, I have not only had the opportunity to practice Shakespeare in the classroom but also on the main stage—both proving to be invaluable learning experiences,” he says.

Plouffe has been busy in other shows as well — notably the world premiere of acclaimed Canadian theatre artist Daniel MacIvor’s 2011 play Inside, which was written specifically for the Phoenix cast — and in such off-campus productions as Theatre Inconnu’s Pornography and Blue Bridge Repertory Theatre’s Who’s Afraid of Virginia Woolf?, acting opposite Oscar-nominated actress Meg Tilly.

In closing, Plouffe looks to none other than Shakespeare’s Twelfth Night to offer recognition for the generosity afforded him by the Nigel Leach Memorial Scholarship: “I can no other answer make, but, thanks, and thanks.”