If there’s one thing Department of Writing delegates will know before arriving at the Canadian Creative Writers and Writing Programs conference this week, it’s that size does matter. Unlike its American counterpart, the CCWWP is expecting about 200 attendees at their third biennial conference this weekend at UBC, instead of the thousands who attend the AWP.

“We’re what you might call intimate,” says Department of Writing professor and current CCWWP chair Lynne Van Luven. “Because our numbers are manageable, students can meet with publishers and editors, as well as with each other—and while writers come to such events to renew old friendships, they also come to hear from new writers with new ideas, which is much easier at a small-scale conference.”

Formed in 2010 to address the need for a Canadian professional organization devoted to supporting the teaching of creative writing in its myriad forms, the goal of the fledgling CCWWP is to be as inclusive as possible. That means it’s an organization not only for academics and instructors, but also for creative writers and students working in various languages, and in all types of venues and situations. 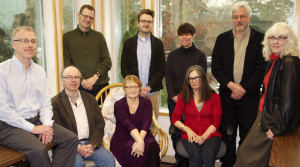 “I’m delighted to see both our undergraduate and graduate students participating in the conference,” says Van Luven, who also sat on the first provisional board back in 2010. “This is a chance for them to network with key persons in the publishing industry, as well as with their peers.”

Grutter, Close and Routley are joining Van Luven in presenting “So you want to start an on-line magazine?” at Friday’s publishing, editing, & technology panel, showcasing some of the work that’s being done in departmental projects like the Coastal Spectator online review magazine and Routely’s queer literary magazine Plenitude. Meanwhile, Dionne and Janess taking part in the student reading event alongside alum Kayla Czaga (Arc). For their part, Backhouse and Shepard will be participating in the “From MFA to Page and Stage: Getting Your Thesis Published or Produced” panel on Saturday, alongside fellow Writing alumni Peter Boychuk and Melanie Siebert. Also attending is alumni novelist Aislinn Hunter (Stay), who is participating in the Friday panel “What’s the Matter? Thinking, Writing and Teaching through Things.”

“We have had a wonderful Conference Committee for this event, under the steady direction of Andrew Gray from UBC,” says Van Luven, who will also be hosting Saturday’s plenary session on “Writing Programs in a Global Context”, featuring a panel of international writing teachers. “I’ve had the opportunity to interface with writers and teachers all across the country, which has been an added benefit of being chair of the CCWWP board for the past two years.”