Shakespeare for the iTunes generation

Shakespeare’s funniest and shortest comedy is getting a reboot for the digital age. 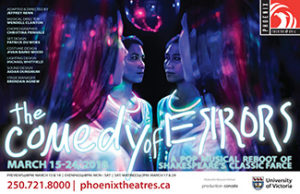 Self-professed Shakespeare nerd Jeffrey Renn — currently completing his MFA in Directing at the Department of Theatre — has been working to create a Shakespeare production that would truly engage the iTunes generation. This week, the director opens his unique adaptation of The Comedy of Errors at UVic’s Phoenix Theatre, blending Shakespearean verse with contemporary music to create a zesty production that’s more Broadway pop musical than Elizabethan classical.

Of course, Renn isn’t new to either acting, directing or reinterpreting the Bard. From the London Academy of Music and Dramatic Arts to both the Stratford and Shaw festivals and even Broadway, he has performed Shakespeare across the world. “I have been blessed to work with rare artistic genius when it comes to Shakespeare,” says Renn, “including the legendary Robin Phillips.” (Well-known as the artistic director who put Ontario’s famed Stratford Festival on the map, Phillips sadly passed away in 2015 ). 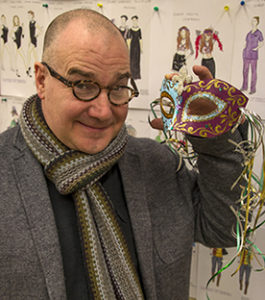 “I’m grateful to have been included in a traditional process of giving, sharing and playing that was taught to me by my theatre mentors,” he continues. “There’s now a line that travels through Shakespeare, back to the Greeks and forward to these amazing young artists on stage today. I want to be able to have young people as excited about the Bard’s work as I am.”

Comparing Shakespearean theatre to music videos, Renn feels the cutting-edge technology in music videos offers a shared vocabulary  uniquely driven by youth—much as it was with theatre in Shakespeare’s day. As such, he wanted his pop-musical adaptation of The Comedy of Errors to look and feel like a contemporary music video, with an extensive use of mirrors to create a club-like environment and extend the themes of reflection right into the audience.

First told in Roman times, The Comedy of Errors is an intricately-entangled farce of mistaken identity telling the tale of two sets of twins, separated at birth, who find themselves in the same city (and, coincidentally, also have the same name). Chaos ensues as their worlds collide and they end up questioning their own identities; of course, the crazy mix-up resolves into a tale of family reunion, love and self-reflection. (Cue the mirrors!)

The cast of Comedy of Errors (photo: David Lowes)

For the Phoenix production, Renn has transposed the setting to modern-day New Orleans during the annual Mardi Gras festivities, and sought inspiration in the music of Nina Simone, Queen, Beyoncé, Justin Timberlake and many others. He adapted the play with music, integrating Shakespeare’s actual verse into versions of the songs he hopes will help student audiences better relate to the themes of the play.

“Young people have always been searching for a sense of meaning, a sense of recognition,” he explains. “In order to know ourselves, we mimic behaviour, we mirror it — or, in the vernacular of music culture, we’re sampling it, making a mashup. Today, millennials understand the journey of self-identity as a performative act, framing and reframing their world through their digital devices . . . I wanted to change the play’s context to help students see themselves through Shakespeare’s words, to have fun, and make it theirs.” 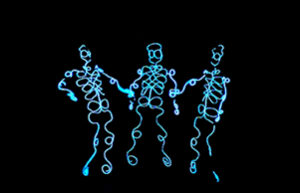 Get your glow on with illuminated costumes (photo: David Lowes)

To ensure the authentic sound of youth culture, fourth-year student Aidan Dunsmuir fills the auditorium with an energetic sound design while lights explode on to the stage; colourful spandex and bling bring out the outlandish costumes of Mardi Gras parades, as well as the razzle dazzle of the club scene, with costumes designed by fourth-year student Jivan Bains-Wood. Fast-paced choreography by Christina Penhale, of Salt Spring Island’s exitStageLeft, and a clever glow-in-the-dark skeleton dance (with high-tech EL Wire suits designed and programmed by fourth-year student Matthew Wilkerson) completes the allusion to music video aesthetics. 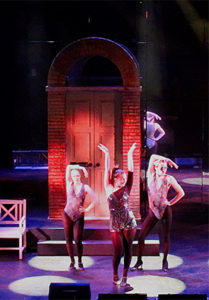 Sisters are doing it for themselves at the Phoenix (photo: David Lowes)

“We’re adapting Shakespeare’s adaptation of a Roman play that is almost 2,000 years old, proving that our basic humanity really hasn’t changed since then,” says Renn. “We might live differently technologically, but we’re still the same: we still have our human foibles, and we’re still really funny . . . and with what’s happening in our world today, we need laughter — silly belly laughter — and not the sort born of cynicism.”

Phoenix Theatre’s The Comedy of Errors runs March 15 to 24, Mondays through Saturdays at 8pm, with 2pm Saturday matinees on March 17 and 24. Tickets range from $16 to $26, with $8 same-day previews on March 13 & 14. Director Jeffrey Renn will also offer a Preshow Lecture at 7pm Friday, March 16, where he will discuss adaptations of Shakespeare plays he has been involved with over the years. (All are welcome to the Preshow Lecture, whether you’re attending the show that night or not.) For tickets, please call the Phoenix Box Office at 250-721-8000.