What’s in the Basement?

Busy Visual Arts faculty member Sandra Meigs is not only participating in the current faculty exhibit Paradox at Legacy Art Galleries Downtown, she also has her own solo exhibition of new large-scale works, The Basement Panoramas, running at Open Space through to December 14. 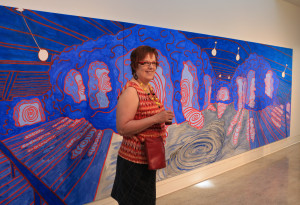 Sandra Meigs with one of her Basement Panoramas (photo: Cliff Haman)

“The work relates to my year of grieving after my husband succumbed to cancer in 2010,” she says. “It took me a year to get back to work—but then I went into it big time with this epic project. I think grieving is not something people talk about enough; there is a big mystery and privacy about it in our culture, whereas in other cultures it is quite openly shared. I decided to share these four major stages in my process over the year, from when I could do nothing till I came out of it feeling transformed.”

The result is the vividly coloured paintings that make up The Basement Panoramas. Based on her studies of the invisible foundations of buildings—places like basements and crawl spaces—Meigs found these overlooked, catch-all spaces to be surprisingly intimate. “The paintings deal with the grieving process in a universal sense—it isn’t necessary to know specifics, just to walk with the paintings and experience the spaces they portray. 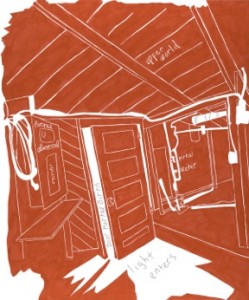 Basement spaces often hold that which we do not want to let go of and are also the foundation of the house, analogous to the psyche,” explains Meigs, noting that many of the pieces in the exhibit relate to the idea of transformation.

Her research into this project began, naturally enough, with her own basement: a crawl space with a giant rock in it upon which her house was built in 1922. From there, she took panoramic photos of people’s basements, then made drawings from them. Another unique aspect of Meigs’ exhibit is the inclusion of a “robotic element”—six life-size ghost-like forms that take turns perambulating on a raised platform. “Each ‘ghost’ wears a semi-transparent robe with a golden spiral painted on it and has noise makers inside that jingle as they moves,” she explains. “It’s an extension of my painting—a moving painting, in a sense.” 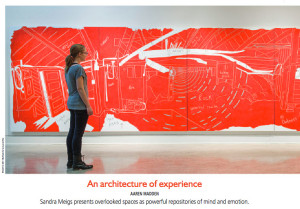 Be sure to read this fascinating profile of Meigs and her new exhibit in the November issue of Focus magazine (flip to page 44), as well as this piece from the Times Colonist. You can find out more about the backstory to the exhibit on this post from Kate Cino’s Art Openings website—where there are also some opening night reactions from familiar Fine Arts faces Maureen Bradley, Megan Dickie, Todd Lambeth and Kevin McGuinn, among others.

“Meigs’s unsettling canvases achieve an uncanny physical presence and seem to shift and move as subtly as breath or the movement of the body’s circulatory system,” says Open Space executive director Helen Marzolf. “Meigs observes that these new works cannot be read in a single glance; it is only by walking back and forth or finding a high and distant vantage point that they can be apprehended.”