Here’s a tip if you’re planning on seeing Unity (1918) at the Phoenix Theatre this week: book fast! Given the outstanding reviews the show has been receiving, tickets won’t last long—and the show closes after two final performances on Saturday, March 22. Click here for ticket information. 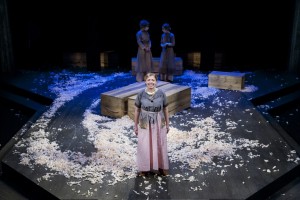 Writing professor Kevin Kerr directs his own Governor General’s Award-winning script with style and grace, crafting a heartfelt and surprisingly funny look at the impact of the 1919 Spanish Flu pandemic on the small town of Unity, Saskatchewan. As discussed in this post, this is the first time Kerr has directed Unity (1918), despite his long and lauded career in theatre as a playwright, director and artistic director.

You can find out more about the backstory to this production in this Times Colonist preview—wherein Kerr reveals the play’s teenage female undertaker is based on a friend from high school (“She said, ‘I think I’m going to become a mortician.’ This beautiful, vivacious 17-year-old was saying, ‘I’m going to spend the rest of my life in death.’ It was like, wow, really?”)—and this podcast of U in the Ring, the CFUV weekly campus radio show (fast forward to the 18:40 mark). CTV VI also offered a preview of Unity (1918) in the  March 13 episode of “Your Island Arts & Lifestyle” (skip ahead to the 1:50 mark), as did CHEK TV in this clip. 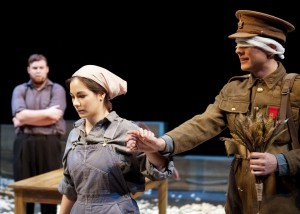 Reviews of the production are unanimously strong. “Who knew a play about the flu could be so moving?,” writes Adrian Chamberlain of the Times Colonist in his four-star review. “The University of Victoria’s student cast does a superior job with a challenging script—the sisters [student actors Haley Garnett, Gillian McConnell and Amy Culliford] are particularly convincing. Kerr has directed his show with panache and grace. Mounted on the thrust stage of the Phoenix’s Chief Dan George Theatre, the production’s simple, bold design elements are first-rate . . . . Kerr & set/lighting designer [Allan] Stichbury have conspired to make Unity (1918) a visual poem.”

Busy local arts blogger Janis LaCouvee was also mightily impressed with the production, describing it as “a masterpiece by any measure” in her review. “Unity (1918) is an ode to our human capacity to endure, to continue to dream, even among unimagined horror,” she writes. “A remarkable production and a fine tribute to preserving our ancestors.”

Local theatre blog The Marble was also very enthusiastic, hailing “Unity is a triumph. Performers . . . never appeared to be giving an ounce less than their best.” Noting that the script “trembles with emotion”, reviewer Drew May also praised the show’s design as a “combination of detailed, turn-of-the-century objects and costumes, and a sparsely decorated but ingeniously flexible set will draw in even stubbornly realist audience members. Detail is used to suggest, rather than assert, and the result refuses to distract.”

CBC Radio’s On The Island also reviewed the production, with veteran theatre critic Monica Prendergast noting the opportunity “to see a Governor General’s prize-winning play is always a must-do for any theatre lover, especially a Canadian theatre lover.” Prendergast also felt the age of the characters well-matched the student cast—she singled out leads Amy Culliford (Beatrice) and Logan Mitev (Hart)— and enjoyed how “this event in history is shown through the eyes of its effect on young people.” She also enjoyed Stitchbury’s set, but wasn’t so much a fan of the show’s three-hour run time.

Local online arts source CVV Magazine also praised the production in this review simply titled, “You should go!” Melanie Tromp-Hoover, wrote “Unity (1918) is about so much more than just the flu. It’s a look at the enduring struggle we all face in our ambition towards love and purpose and family; the Phoenix’s production simply gives us an elegant, intuitive tool to better explore it.” Tromp-Hoover was particularly keen on cast members Danielle Florence, Marisa Nielsen, Amy Culliford, Haley Garnett and Francis Melling, as well as Colette Habel‘s sound design.