“Summer and Smoke” is a show of firsts and lasts

Tennessee Williams’ Summer and Smoke, the final Phoenix Theatre production for the 2015/2016 season, is definitely a production of firsts and lasts for director and MFA candidate Alan Brodie and set designer and Theatre professor Allan Stichbury. While it marks the first time Brodie has directed a full-length play, it is also the last show Stichbury will design as a Theatre professor, given his imminent retirement. 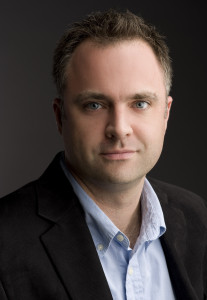 Brodie, a highly acclaimed Canadian lighting designer with over 300 plays, musicals, operas, and dance productions to his 25-year career credit, is merely the latest working professional to enroll as a Master’s student in UVic’s Department of Theatre. And while his design work has been seen on the stages of all Canadian English-language regional theatres, Summer and Smoke marks both his directorial debut and culmination of his Masters in Directing—a solid payoff on his two-year academic investment. “I felt that if I was going to put work on hold, I needed to undertake something that could be truly transformative on my practice as a designer,” he said. “Studying directing has been just that. The past two years have been the most challenging and rewarding enterprise of my life.”

Summer and Smoke runs to March 19 at UVic’s Phoenix Theatre. Click here to listen to this CFUV interview with Alan Brodie about making the transition from lighting designer to theatre director.

Brodie, who designed the lights for a 2007 Shaw Festival production of Summer and Smoke, is happy to be in the hands of a master storyteller like Tennessee Williams. He knew he wanted to direct something from the canon of the 20th Century American Drama, and that Williams loomed large at every turn. Yet while Summer and Smoke may not be the playwright’s best-known work, Williams himself felt that the central character of Miss Alma Winemiller “may very well be the best female portrait I have drawn in a play.” Alma, the play’s protagonist, is a minister’s daughter who struggles with feelings for her self-indulgent neighbour John; their bittersweet relationship is heartbreaking and poignant, and Williams’ tale about the classic struggle between body and spirit has stood the test of time since it was first produced on Broadway in 1948. 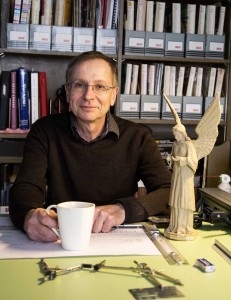 Allan Stichbury in his office, with a model of the angel seen in Summer and Smoke

With a bittersweetness suitable to the play itself, Summer and Smoke is also the final Phoenix production for set designer Allan Stichbury before his retirement from the Department of Theatre. Stichbury, a UVic professor since 1988, has managed to successfully balanced a career as both a professional designer and teacher. Yet his own path to theatre was a little circuitous.

After high school, Stichbury traveled the country, with plans of returning to his native Saskatchewan to attend pre-law courses. Yet upon visiting Victoria and learning of UVic’s new law school, he decided to stay . . . but the political science classes didn’t capture his imagination. “In 1971, there weren’t a lot of women in political science courses,” he recalls, “but there were a number of women from the Theatre department in my English course, so I began to hang out there.” It was also at UVic that he saw his very first play, and soon realized theatre was much more interesting than law. “So I dropped some other classes, registered for Theatre 100 and, by second year, had changed my major to theatre.”

It was here at UVic that Stichbury learned how to design and build sets, working with then-design professor Bill West, and realized he had a skill for design—so much so that he dropped out of school after second year and began working at Victoria’s Bastion Theatre. Two years of backstage experience later, he enrolled at the University of Alberta for theatre design and never looked back. With a career designing scenery and lighting for numerous major theatre and opera institutions across Canada, Stichbury has also designed shows for Broadway, in Washington DC and Bangkok, Thailand, where he was influential in establishing a student exchange between Bangkok University and the University of Victoria.

For Summer and Smoke, director Brodie’s research into the 1948 original convinced him that he wanted to stay true to that production’s realism, but in a way that would help translate it to 2016 audiences. Working together with Stichbury, they chose to place the play’s various locations on a revolving turntable instead of having more traditional scene locations (stage left, stage right). “We can maintain the poetic symbolism of having everything on stage at one time,” says Brodie, “but the revolve allows us to select which scene we feature, and bring that location downstage so that the communication between the actor and the audience is the strongest it can possibly be.” 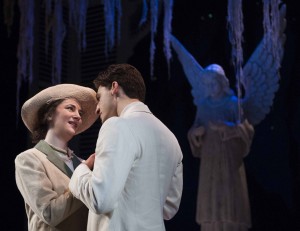 With a vast southern sky and a nod to Mississippi architecture, Stichbury’s designs for Summer and Smoke offer an elegant sense of minimalism. But he’s clear that, as well as serving the play, his designs for the Phoenix are also about creating opportunities for student learning and exploration. “It’s important to use design elements every few years—like a turntable or the use of a cyclorama screen to project a huge sky onto—so that each cohort of students can be introduced to and explore these concepts.”

As with other theatrical professionals who have earned their MFA at the Phoenix—Chari Arespacochaga, Graham McMonagle, Peter McGuire, Christine Willes and David Ferry, to name but a few—Brodie feels lucky to have been a student here. “I have been so fortunate to work with an incredible team on this production. Designers, actors, stage managers, coaches, technicians, crew, staff, faculty, supervisors and advisors alike—all have conspired to give me a dream ride on my first major foray into directing.”

As for retiring, Stichbury doesn’t see it as the end. “It’s not about stopping,” he says. “It’s about changing your focus and moving on to something else.” With his Bangkok University production of West Side Story opening on the same night as Summer and Smoke, and designing several upcoming plays across Canada, he is definitely not stopping soon. “It will be a variation of what I do. Will it involve teaching? Will it involve designing? Probably.” Stichbury pauses and chuckles, “It will probably also involve some time at the beach.”