Even though she’s now retired, beloved poet and Department of Writing professor Lorna Crozier continues to have an impact on campus: a highlight of the popular annual faculty reading night—happening 7 p.m. on Sept. 28 in room 105 of UVic’s Hickman building—will be the announcement of the inaugural recipient of the Lorna Crozier Scholarship. 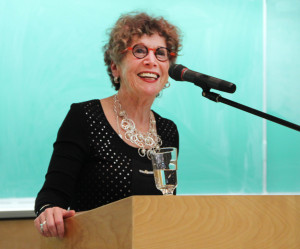 Awarded annually to a top-level, fourth-year poetry student, initial fundraising for the scholarship began at the celebration reading that marked Crozier’s retirement from the writing department in 2013. Hosted by Shelagh Rogers, before she was declared UVic’s current Chancellor, the original fundraiser saw a number of Crozier’s previous students—many of whom are now among Canada’s finest poets—return to campus to honour their mentor. (And in nice bit of full-circle, Rogers will be in attendance at this latest event as well.)

One of those past students is acclaimed poet Shane Book, recently hired as the writing department’s newest poetry professor. “Lorna provided a nurturing environment where students were challenged to really engage with their own work and with Canadian and world literature,” Book recalls. “She was not afraid to be direct and honest: on one of the first poems I wrote for workshop she wrote something along the lines of, ‘You can do better than this if you take this seriously.’”

Even though he won’t start teaching at UVic until 2017, Book will be among the faculty’s featured readers at the event, alongside department chair David Leach and the award-winning likes of novelist Bill Gaston, playwright Joan MacLeod, poet & essayist Tim Lilburn, short-story writer Lorna Jackson, novelist Lee Henderson, filmmaker Maureen Bradley and playwright Kevin Kerr. Also on the reading bill will be the inaugural student recipient of the Crozier scholarship and, most likely, Crozier herself. 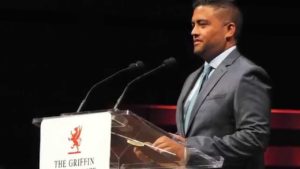 As well as a great poet, Book notes Crozier’s essential influence as both a teacher and mentor. “She was a leader who led with her passion for poetry—a passion so great she was able to take a room full of students who had nothing in common with each other . . . and instill in us a care and concern for each other as artists and as human beings. She set an example for how to live in the world as an artist. Her drive, ambition, and work ethic told us that poetry was an important thing worth devoting one’s life to. But she was also a lot of fun.”

While Book doesn’t start teaching classes until 2017, he will be featured at the reading night alongside the rest of the writing faculty, as well as the winning student and Crozier herself. “The founding of the Lorna Crozier Scholarship helps to ensure a new generation of poets can continue to study and practice their craft at the finest writing program in the country,” he says.