Scholar, pianist, author, artistic collaborator and professional speaker—School of Music professor Harald Krebs is one of Canada’s finest music theorists, and has been named this year’s winner of the Craigdarroch Award for Excellence in Artistic Expression. 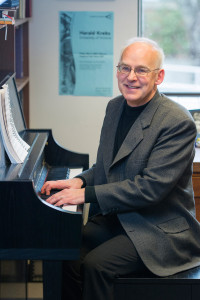 “It’s very touching that my colleagues would do this, given the nomination process,” says Krebs. “In fact, I really thought someone else should be nominated this year, but it’s very sweet that the department nominated me. I have such great colleagues.”

Recognized internationally as an expert on musical meter and rhythm— especially in the 19th-century German art song known as Lieder—Krebs was also named a UVic Distinguished Professor in 2010. This award comes with a $1,000 prize, which Krebs characteristically is considering using for the greater good. “One thing I’ve done with other awards I’ve received is to bring in a guest speaker, so it’s not just for my benefit but also for the benefit of the School and the faculty,” he says. “It’s really nice to contribute in this way.”

Now the Head of Theory, Krebs joined the School of Music back in 1986 “It’s been almost 30 years, and there have been a lot of changes over the years,” he says. “Good friends have retired, but we’ve been very lucky with the new people who have come in—they’ve maintained the collegial atmosphere that was there when I came in. I’m really proud of my colleagues, and the students too—it’s not just about doing scholarly work, it’s also about performing.”

Krebs pauses for a moment. “I think that’s probably why I was nominated,” he continues. “The award says ‘uses artistic expression to further knowledge’—and that’s certainly what I try to do. My talks always have a live performance aspect; I always clarify my points by actually performing—which makes it more fun for me, and the listeners too.” 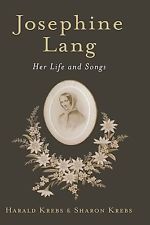 In his 34-year academic career, Krebs has produced two groundbreaking books, a steady stream of peer-reviewed articles and collaborative performances fusing scholarship and musical practice. At the core of this work is his talent as a pianist, which he shares regularly with the broader community of music lovers—notably through his Lieder at Lunch series, which has been running since 2001. “It took a bit of time to take off—it is an esoteric genre, after all,” he chuckles. “But now we have quite a large following from town as well as campus.”

Immediate plans include traveling to Belgium for a pair of conferences (“I’m a little stressed about it, but I’m sure it’ll be fun once I get there”) and a German research trip to both Berlin and Bonn.

Only three other Fine Arts representatives have won Craigdarroch Awards: Marcus Milwright in 2013, Lorna Crozierin both 2012 and 2011, and the Lafayette String Quartetin 2010.

The Craigdarroch Research Awards were established in 2003 to recognize outstanding research-focused and creative contributions at UVic. They were named for Craigdarroch Castle, the estate that was once home to UVic’s predecessor institution, Victoria College, from 1921 to 1946.