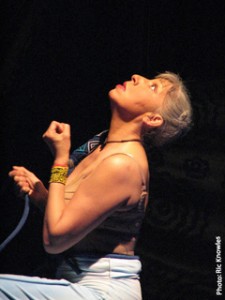 Think theatre can change the world? Monique Mojica knows it can.

An acclaimed Guna and Rappahannock actor and playwright (Princess Pocahontas and the Blue Spots), the Toronto-based Mojica is dedicated to a theatrical practice as healing, as reclamation of historical/cultural memory, and as an act of resistance. Hot off a week-long run performing her play, Chocolate Woman Dreams the Milky Way at Vancouver’s Talking Stick Festival, Mojica will offer a March 6 public lecture on the five-year process of creating the production.

Co-founder of Toronto’s Turtle Gals Performance Ensemble and former artistic director of Native Earth Performing Arts, Mojica is also a member of the Chocolate Woman Collective, which follows the rigorous application of a creative process that privileges indigenous knowledges, cultural aesthetics and performance principles. She has taught at McMaster University, the Institute of American Indian Arts and was the editor of a special issue of Canadian Theatre Review focusing on Native theatre.

During her short time in Victoria, Mojica will also lead a workshop encouraging aboriginal children to tell their own stories, as well as a workshop with UVic students about creating theatre based on Indigenous performance principles. Her public lecture, “Scoring the Body Through Guna Aesthetic Principles: Indigenous Dramatic Arts in Theory, Process and Practice,” will discuss how Chocolate Woman uses an Alice-down-the-rabbit-hole concept to explore her own ancestral roots in Panama’s Guna culture, and explore its potential for creation, conflict and healing.

“My exploration for Chocolate Woman Dreams the Milky Way began when I invoked the healing spirit of Buna Siagua (Chocolate Woman) as a bridge to that which has not been interrupted by colonization, displacement and urbanization in my life,” says Mojica. “What have I got that is not broken?”