2017 marks the 150th anniversary of celebrated US architect Frank Lloyd Wright’s birth. It is also the year UVic will return seven Wright-designed stained glass windows to their original setting in Buffalo, New York. 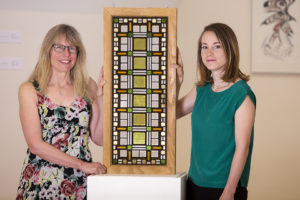 UVic acquired the windows only five years after the university was founded and nearly 10 years after the death of Wright, and has made good use of them as a highlight of our significant arts-and-crafts collection.

“This decision reflects our university’s ongoing commitment to artistic stewardship and heritage preservation,” says Mary Jo Hughes, director of Legacy Art Galleries. “We are grateful for these five decades with this exquisite collection of art glass. And we know we are doing the ‘Wright’ thing by reuniting them with their original home and within a meaningful context.”

Within their original context

Wright didn’t use the word “windows.” Instead, he called them “light screens.” The three individual screens and two pairs owned by UVic since 1968 include “Wisteria” light screens once used in clusters to hide heating radiators, as well as a set of cabinet door screens—all part of a home designed and built by Wright for wealthy US executive Darwin D. Martin.

Martin’s patronage of the young Wright brought acclaim to the architect’s early career, and the Darwin D. Martin Complex in Buffalo is one of his most impressive structures. It is Wright’s only residential project to involve multiple buildings. Martin House originally included a brilliant collection of nearly 400 art glass windows, doors, skylights and casements, as well as custom furnishings and other decorative objects.

Construction of the complex, an outstanding example of Wright’s “Prairie” period, was completed in 1907 but, as a result of the stock market crash in the 1920s, the family was deeply in debt when Martin passed away in 1935. The site was abandoned and left in disrepair. Recent renovation efforts have now restored this national historic landmark under the auspices of the Martin House Restoration Company and today, many pieces of the original art glass are being reinstalled.

“The light screens represent a broad sampling of Wright’s genius in glass, which is critical to the scholarly interpretation and general appreciation of the complex,” says Mary Roberts, executive director of Martin House.

The transfer of ownership of the light screens includes a $25,000 CDN donation from the Martin House Restoration Corporation to establish a collection care and research fund at UVic. 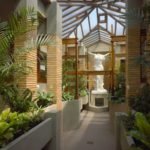 The interior of Martin House

“The ability to see and handle objects, like the windows and other artwork, is a completely different experience than looking at pictures of them on a computer screen,” she explains.  “Seeing artwork in person is essential to its study because you observe details, light, colour and texture that would otherwise be muted in digital imagery.”

“And it’s not only about putting art on the walls,” explains Hughes. “Cultural and academic collaborations, along with conversations using art to explore deeper issues, are vital aspects of the vision of Legacy Art Galleries.” 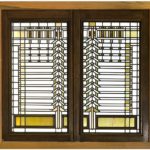 People will have a chance to bid farewell to the light screens during the exhibition at UVic’s free downtown public art gallery on Yates Street. The windows return to the US in October. Johnstone-Bedell, who holds an Art History BFA (2012) and an MFA from Queen’s University (2015), was a curatorial assistant at the gallery through an internship with the federal program Young Canada Works and is currently on contract as an assistant curator.

She explains that the art glass is an intrinsic decorative and architectural part of Wright’s unifying design principle called “organic architecture,” which integrated the natural environment, his vision and architectural plan, and the home’s interior fixtures and furniture into a single harmonious scheme.

Legacy Downtown is open Wednesday through Saturday, 10am to 4pm, with Thursdays until 8pm for the summer.