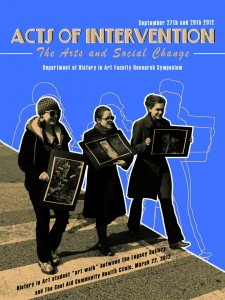 “Acts of Intervention” will examine how the production and interpretation of art can act as a social agent and catalyst for change. This year’s symposium will include presentations by historians of art and music, applied theatre, as well as creative writers and visual artists. Topics will embrace a wide range of cultures, media, and time periods to address issues ranging from climate change and sustainable housing to intervening in art history’s taxonomic and methodological conventions.

It all kicks it all off on Wednesday night with a pair of Visiting Artist Talks featuring Luigi Ferrara and Susan MacWilliam, a noted Belfast artist who has an ongoing study of significant events in the history of paranormal research; MacWilliam is in town for a pair of shows at Open Space, F-L-A-M-M-A-R-I-O-N and Persistent Personalities. Join Ferrara and MacWilliam at 6:30pm Wednesday, September 26, in room A162 of the Visual Arts building. There will even be a bar on hand so attendees can get a drink between sessions! 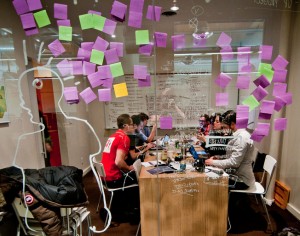 Thursdays Action Charrette for History in Art graduate students focuses on a process for creating art interventions on campus. This charrette will see grad students will undergo a collaborative and creative process that takes participants through the entire design process—from idea generation, conceptualization, research and development, to execution and presentation—over a very short period of time. Charrettes typically bring together designers, developers and prospective investors with end users and stakeholders in a concentrated event resulting in outcomes that can range from concepts for spatial, program and business planning, to schematic drawings, development schedules, films and installations, etc. Clients typically use charrette results to develop investment opportunities for the project vision, and mobilize participants, end users or stakeholders to participate in the projectʼs next steps. This one runs 10am to noon  in FIA 104, and will involve both guests Ferrara and O’Brian. 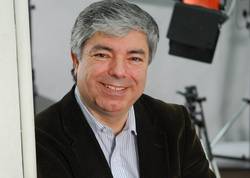 Friday will see Ferrara—an acclaimed architect, designer, entrepreneur, educator and director of the Institute Without Boundaries—presenting his Orion lecture, “Learning to Change: A Change Lab in Action” at 11:00 am. He will discuss the work of the Institute without Boundaries in formulating strategies for social, technical and ecological innovation that derive from philosophies of co-creation, community engagement, interdisciplinary collaboration and whole systems thinking. 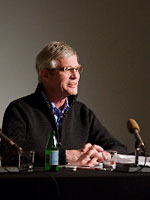 After that, O’Brian—professor of Art History and faculty associate of the Peter Wall Institute for Advanced Studies at UBC—will be offering his own Orion lecture, “Nuclear Invisibilities: The Man with the Bag on his Head,” as part of a larger project on nuclear photography in North America and Japan called “Camera Atomica.” He’ll speak at 3:00pm, and both talks will be in Visual Arts A146.

Acts of Intervention runs 9:00am to 5:00pm Friday, September 28, in Visual Arts A146—and it’s absolutely free and open to the public. History in Art will also have a lobby display up in the Fine Arts building throughout Homecoming weekend.

Acts of Intervention: The Arts and Social Change — full schedule

David Neel’s “Life on the 18th Hole” records and commemorates the seventy-eight day armed standoff between Mohawk warriors, Canadian armed forces, and the Quebec Provincial police in 1990. Although the print was widely circulated in the early 1990s, this work has received little scholarly attention. I argue that with the production of this photomontage, Neel transforms the space of the print into an indigenous place.

By amplifying cultural gestures in order to reveal their place within nature; and conversely, by capturing natural events through cultural apparatus, I am researching possible interconnections between landscape, identity, and technology in my studio practice. If the Canadian landscape can be considered a defining element of our cultural heritage, then anthropogenic global warming threatens not only to endanger our wellbeing, but our culture and way of life.  Many of my works imagine the consequences of a warmer climate, one without permafrost, glaciers, snow, or temporary cultural artifacts such as snowballs.  This talk will focus on several of these projects leading to a new work in progress in which extends this dialogue into a form of social practice and activism.

• Maureen Bradley, Creative Writing: Excavating the Self: Sites of Resistance

My film, video and transmedia practice has always germinated out of personal experience. I began making activist video twenty years ago and came of age as an artist amidst identity politics. Though my work has moved beyond the politics of identity per se, as media artist, I am always mindful of cultural appropriation. As a result, my work always stays close to home. Whether working in documentary, drama or conceptual forms, I always place myself within the frame, in some manner, as a means of maintaining my own code of political accountability. In this talk, I will reveal how this ethos led me to the difficult decision to film the loss of my home and community in 2009 at Pedder Bay in Metchosin. Burning Down My House, puts an artful lens on the BC housing crisis by highlighting the attack on affordable housing for the working poor.

11:00 am – 12:15 pm—Keynote Speaker I: Luigi Ferrara, Director, School of Design and the Institute without Borders, George Brown College

• Dr. Victoria Wyatt, History in Art: “Everything Has Changed, Except the Way We Think”: Including Indigenous Epistemologies in Academic Research

Indigenous arts embody epistemologies that offer vital alternatives to those underlying Western industrialized societies–but they must find venues to speak cross-culturally on their own terms. Their power to mediate social change diminishes when they are studied within the methodologies of the dominant thought systems they challenge. Recently, many indigenous artists and writers have criticized conventional academic research, insisting instead on quite different approaches that best suit indigenous epistemologies and cultural contexts. My paper discusses the implications of their voices on art historical and contemporary treatments of indigenous arts. It argues that being an “objective” outside observer, as conventional academic research requires, conflicts with the philosophies in many indigenous arts and erects barriers to social change. When considering arts that suggest alternatives to “mainstream” societal assumptions, art historians cannot remain detached.

Inspired by anthropologist Tim Ingold’s call to listen to what the things in the world are telling us, this paper proposes an ecological approach to the early modern domestic interior. In particular, the paper examines the concepts of ecology, meshwork, assemblage, distributive agency, vital materiality, and matter as social performance, which appear in the work of political scientist Jane Bennett, feminist philosopher Karen Barad, sociologist Bruno Latour, and Tim Ingold. As the paper argues, these concepts provide a phenomenological, integrative, and non-hierarchical framework for the study of the home as an environment, giving us the tools to detect and analyze the social and material processes through which the human and the material are intertwined.

• Dr. Warwick Dobson, Theatre: No Happy Endings: What Can Applied Theatre Really Do?

In the wake of the October Revolution, Lenin said: theatre is a weapon to be used in the service of the socialist revolution.  Latterly, the idea that theatre is a weapon has become an article of faith for most applied theatre practitioners; and many an extravagant claim has been made by those who see theatre as a powerful means of ameliorating the conditions of the vulnerable, the marginalized and the oppressed. In the past fifty years, a large number of well-meaning, good-intentioned projects with ambitious aims have taken place globally – all, no doubt, fuelled by the hope of a truly happy ending.  But what kinds of happy endings are we legitimately entitled to expect from our endeavours? This paper seeks to pose two questions that applied theatre practitioners have traditionally been reluctant to engage with: firstly, is theatre a weapon? and secondly, what can it really do?

• Dr. Evanthia Baboula, History in Art: The impact of a Byzantine Emperor in Valois, France

This ‘work in progress’ paper reflects on the presence of the emperor of Byzantium, Manuel II, in the royal court of France  between 1400 and 1402. Although the imperial visit to France, including a short visit to England, engendered much interest by chroniclers, consideration of Manuel II’s ceremonial presence in these royal courts is often divided from the more active nature of his diplomatic goal of achieving assistance for his own empire. But there is plenty of material about his participation in courtly life: he gave and received gifts; he participated in feasts and princely weddings; artists were clearly inspired by his presence for a long time after his visit was over, and he was aware of current religious debates in Catholic Europe. The paper argues that the emperor’s presence should be seen as an active intervention of Manuel II in the European courts and connected with the late medieval growth of interest in the Classical past and the Greek language.

• Dr. Christopher Thomas, History in Art: Martin Eli Weil and the Founding of the Society for the Study of Architecture in Canada

In 1973, recognizing Canadians’ need for an organization drawing together people from various fields engaged with architecture and its history and restoration, Martin Eli Weil, a young American architect recruited to the Restoration Services branch of Canada’s federal parks service, assembled a group of architects, academics, civil servants, and preservationists around a plan for a “Society for the Study of Architecture in Canada” (SSAC). Working with a steering committee that represented all  regions, Martin organized the drafting of a constitution, the incorporation of the body and its certification as a learned society, the establishment of a system of working committees, the holding of annual conferences (which I, as a young graduate student, attended), and the publication of a quarterly newsletter, now a journal. Martin Weil died in 2009, but the SSAC lives on forty years later, a tribute, above all, to two things: Martin’s visionary leadership and Canada’s nationalistic zeal and concern for historic preservation in the 1970s.

• Dr. Jonathan Goldman, School of Music: The Buttons on Pandora’s Box: David Tudor and the Bandoneon

In 1960 the Argentinean-born Mauricio Kagel composed Pandorasbox (Bandoneonpiece), a theatrical work in which the performer speaks, gesticulates, and spins on a rotating platform. His friend, the pianist David Tudor had acquired a bandoneon shortly thereafter and began to perform on it extensively, playing not only Pandorasbox but also works he commissioned, such as Gordon Mumma’s Mesa (1966), later used by the Merce Cunningham Dance Company, in which sound captured from six microphones passes through four voltage-controlled attenuators. Tudor’s explorations culminated in his own composition entitled Bandoneon! (a combine), a multimedia work with live electronics produced as one of the 9 Evenings organized by Experiments in Arts and Technology (E.A.T.) in 1966. This paper traces the origins of a remarkable outburst of compositional activity in the American avant-garde that resulted from Tudor’s initial association with Mauricio Kagel, his engagement with the bandoneon, and the extraordinary sensibilities of a virtuosic musician who was in the process of changing his primary mode of making music.