Award-winning scholar, pianist, author and School of Music professor Harald Krebs can now add Fellow of the Royal Society of Canada (RSC) to his many accomplishments. One of Canada’s best known music theorists, Krebs was announced as UVic’s newest RSC Fellow on September 7. 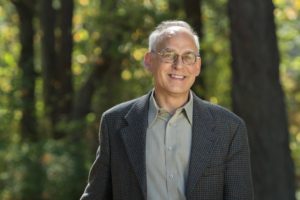 Election to the academies of the RSC is Canada’s highest academic honour and signals that the artist, scholar or scientist has made remarkable lifelong contributions to their field and to public life. And as an internationally recognized expert on musical meter and rhythm—especially in 19th-century German art song known as Lieder—Krebs certainly qualifies.

His work in music theory highlights under-researched and little-understood music of the 19th and early 20th centuries. “It’s a great pleasure for me to open people’s ears to unfamiliar music, and to aspects of familiar music that they had not previously considered,” he says.

Krebs’s publications on the life and music of the neglected 19th century German composer Josephine Lang, for example, have made her music more internationally known, and have inspired analytical work on the music of other female composers. His SSHRC-funded research on the metrically complex music of Robert Schumann culminated in the prize-winning monograph Fantasy Pieces, which has become one of the most influential books in the field.

His theory of meter has been applied to classical music of the 18th through 20th centuries, as well as to jazz, techno, and rock. “It has always been my concern to share my research internationally—via my writings, lectures, recordings, and editions—but also to share it with a local public,” he says. For 15 years, Krebs and his wife Sharon have offered “Lieder at Lunch” recitals at UVic, as well as connecting with the off-campus community through the UVic Speakers Bureau and VIHA’s entertainment programs.

At the core of Krebs’s work is his talent as a pianist. He was named a UVic Distinguished Professor in 2010, and received the Craigdarroch Award for Excellence in Artistic Expression in 2014. Now the Head of Theory, Krebs joined the School of Music in 1986. In addition to his teaching practice, his academic career has seen the creation of two groundbreaking books, a steady stream of peer-reviewed articles and a remarkable series of collaborative performances fusing scholarship and musical practice.