The Department of Visual Arts is saddened to announce the passing of Professor Emeritus Donald Harvey on August 21, 2015. 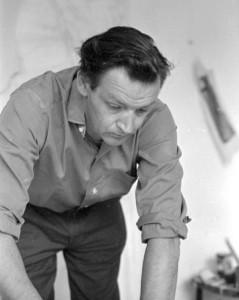 Don Harvey joined the Education department of UVic precursor Victoria College in 1961 and, alongside colleague John Dobereiner, was one of the founding members of the Visual Arts department when it was established in 1966. He was appointed as full professor in 1975 and not only served several terms as chair but also maintained a rigorous schedule of teaching and professional artistic practice throughout his 30-year career at UVic.

While was never directly one of his students, Visual Arts alumnus and current professor Robert Youds clearly recalls Harvey’s popularity among students. “He had a formidably quick wit and a razor sharp eye for anything to do with colour, mark-making, and the pictorial in art,” says Youds, who eventually shared an office with Harvey back when Visual Arts was housed in one of the old army huts on campus. “He played an enormous role in the early development of the Visual Arts department at UVic—for which we current members owe a real debt of thanks.” 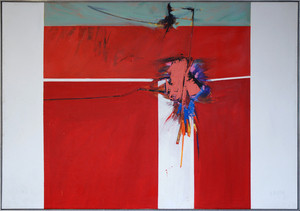 A member of the Royal Canadian Academy of Arts, his paintings, prints, and drawings received significant international recognition, and his work has been exhibited in the National Gallery of Canada, the Art Gallery of Greater Victoria, the Seattle Art Museum and the Musée d’art contemporain de Montréal. Harvey’s work remains part of UVic’s permanent art collection.

“Don was at the forefront of abstract painting experimentation in the 1960s and ‘70s in Victoria,” notes Legacy Gallery director Mary Jo Hughes. “Coming out of the English modernist landscape tradition, Don moved into abstraction and developed his unique diamond-shaped canvas that rejected the horizontal landscape tradition while still very much being about the natural environment and its intersection with architecture. Younger artists such as Carl Beam, Rick Rivet and Eric Metcalfe proclaim he was a major influence on their careers.” 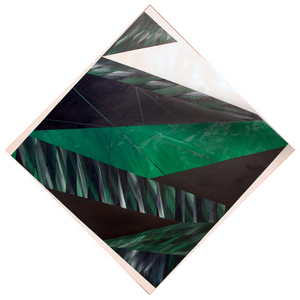 Before moving to Victoria, Harvey completed a National Diploma of Painting and Design at West Sussex College of Art in 1950, and an Art Teacher’s Diploma at Brighton College of Art the following year. He was an art instructor in Wales for four years and traveled to Sicily and Spain, where he painted for a year before coming to Canada.

As Legacy Curator of Collections Caroline Riedel noted in the catalogue for the 2013 exhibit Core Samples: University of Victoria Visual Arts Faculty 1966-1986, “His early work is chiefly non-representational, while his later work draws more directly from nature, both flora and fauna, gardens and landscapes in general. He once described his vocation as an abstract painter to be a lonely one, as ‘no one really understands what you do. Everything’s an abstraction, except the real thing.’ “

Visual Arts alumna and local artist Avis Rasmussen recalls being interviewed by Harvey prior to her acceptance into the department as a mature student in 1975. “He generously gave me the opportunity to develop as an artist—if I obtained a B+ in a summer course,” she says. “My life drawing skills thrived in his classes . . . I learned so much following him around . . . he was so articulate and his consummate artist and art history knowledge was invaluable.” She notes that Harvey even wrote her a letter of recommendation, which helped Rasmussen secure a three-week residency at the International Drawing, Painting and Sculpture School in Italy. “I was certainly privileged to be a UVic Visual Art student with such amazingly creative professors all professional artists working on their own art works.” 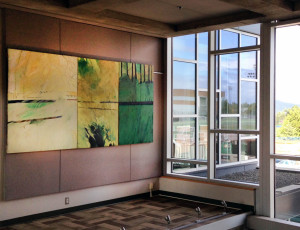 One of Harvey’s Carmannah Valley panels in UVic’s ASB

Harvey’s work took an environmental angle in the late 1980s, when he joined a host of artists who painted the Stein and Carmanah Valleys and donated the proceeds of their work to the Western Canada Wilderness Committee. Harvey also painted a large-scale mural The Carmanah Valley Experience—an installation of 31 abstract expressionist painted panels that are five feet high and up to six feet wide—which was exhibited at the Art Gallery of Greater Victoria.

“To me, his most poignant pieces are those that he did as part of the protest to save the old growth forest,” says Hughes. Now part of UVic’s permanent collection, panels from The Carmanah Valley Experience currently grace the lobby of the Administration Services Building.

The public memorial for Don Harvey begins at 2:30pm on Saturday, Nov 14 at UVic’s Interfaith Chapel, with a reception to follow at the University Club.