Alumni find love at the Phoenix

Most people come to UVic in pursuit of education. Two Phoenix alumni, however, found love and a life together in theatre 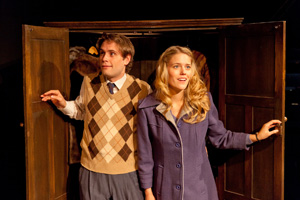 Mack Gordon & Katlin Williams in The Lion, The Witch and The Wardrobe

Ten years ago, Williams met Mack Gordon (BFA ’08) when they were two fresh-faced first-year students in the Department of Theatre. Now married, they return to the stages of the Phoenix Theatre for our annual Spotlight on Alumni with The Lion, the Witch and the Wardrobe, running October 9-18, 2014.

Update: due to popular demand, this show has now been held over, with two extra shows added—8pm Friday October 24 & 2pm Saturday October 25.

“Kaitlin and I are blessed to work together as often as we do,” says Gordon. In 2012, they were cast as Peter and Lucy in Pacific Theatre’s much-loved adaptation of the classic Narnia tale.

Read more about the pair in this Times Colonist interview. And you can read some of the reviews here, where the TC calls it “enjoyable”, “engaging” and “charming,” while CVV Magazine says “there is much to praise in this production.”

Written and published in 1950 by C.S. Lewis, this novel is the first and most well-known story in the Chronicles of Narnia series. Ron Reed, the Artistic Director of Pacific Theatre, adapted The Lion, the Witch and the Wardrobe for the stage, setting the play years later when Peter and Lucy are adults. Stopping off to tour their Uncle Digory’s house they find themselves returning to the same spare room where the old wardrobe sits and begin to recount all the adventures they had as children. Their imaginations take over: using only the furniture in the room and a few old coats from the wardrobe, they travel back to Narnia—bringing the audience along with them.

A seasonal favourite, Pacific Theatre has remounted this play many times to great acclaim since it first played in 1998. Over the past few years, Williams and Gordon have toured this show across the province sharing the clasic story with many BC communities, including stops at Kamloops’ Western Canada Theatre, West Vancouver’s Kay Meek Centre and, of course, the play’s home: Pacific Theatre. This presentation at the Phoenix Theatre brings the play to Vancouver Island for the first time. 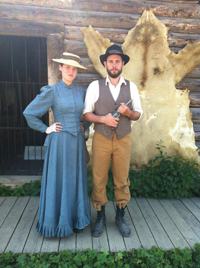 Not many of us get to bring our spouses to work, but for Williams and Gordon, acting together makes their careers more rewarding. They keep an eye out for projects where they can perform together, whether it’s playing fiancés in the Jessie-winning production of The Foreigner or Mr. Jake and Nellie Webster, a gold miner and his wife at Barkerville Historic Town. “We joke that we are a 2-for-1 package,” laughs Williams.

Besides the built-in convenient carpool, working together makes a big difference on stage. “Sharing the stage with someone you already trust completely allows you to take risks that you might otherwise be apprehensive about,” says Gordon. “I sometimes feel akin to husbands and wives who work in the circus on the flying trapeze; our first safety net is always each other.”

Having their show selected as the Spotlight on Alumni presentation this year also means an opportunity to share post-graduating advice with current students. “Our comprehensive education helped get us involved in many areas of theatre, not just acting. The skills and connections we gained—whether backstage, studying marketing, working in the box office, or collaborating with community groups—have kept us working in theatre over the years,” says Williams.

Both actors have busy and multi-faceted careers that provide what they call their “patchwork pay cheque.” Gordon is an actor for theatre, film, and TV and also writes his own plays, works as a director—he recently assisted director Meg Roe (BFA ’04) at Bard on the Beach—and does simulation acting for training purposes. Williams has performed on stages around Vancouver and was also the Community Engagement Manager for Pacific Theatre, where she began right after university as an apprentice. She now finds acting takes up all her time. 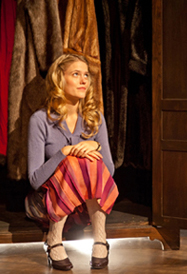 Kaitlin Williams in The Lion, The Witch and the Wardrobe

For Williams especially, this show is close to her heart. As a 12-year old girl, she attended Pacific Theatre’s adaptation of The Lion, the Witch and the Wardrobe and watching the actors transform into the story’s various characters—from Mr. Tumnus and the Beaver, to the evil White Witch and the mighty lion Aslan—inspired her to become an actor herself. “Not only am I performing in this same play, but I get to perform with my husband at my side, at the school where we met, 10 years later! It feels like coming full circle—times 10!”

If you’re planning to attend The Lion, the Witch and the Wardrobe, take a look at our entire Phoenix season. For the regular ticket price of just two plays, you could attend all four plays by subscribing to the entire season for only $48. Or, choose just three plays for only $36.