A Day in the Life: Kirk McNally

Each issue of the UVic community newspaper The Ring features a different “Day in the Life” profile of various staff members. This month, it was Kirk McNally’s turn. Here’s a reprint of the piece that ran in the Summer 2014 issue. 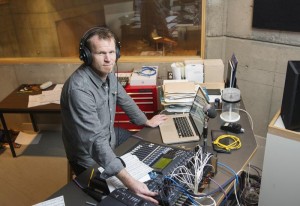 Kirk McNally in the School of Music’s audio booth

A decade ago he was recording the likes of A-list rockers R.E.M., Bryan Adams and the Foo Fighters, but these days you’ll more likely find Kirk McNally tweaking the levels in the MacLaurin Building’s recording studio. But as the Audio Specialist and Recording Engineer for the School of Music since 2004, the best part of McNally’s job is that he doesn’t really have a typical day. “I can be teaching a recording class or mentoring a work-study student or collaborating with a faculty member on a creative project,” he says with characteristic quiet humour. “Every day is a varied day, and that’s a good day for me.”

With a Masters in Music from McGill and a professional career working at some of the industry’s top recording studios, McNally has spent much of his past decade on campus putting UVic on par with other Canadian institutions. Not only does he teach with the joint Computer Science/Music program, but he also designed and maintains four digital audio studios, trains the technicians responsible for the recording and sound re-enforcement of all School of Music concerts, and supports any faculty, staff or student with audio needs. Across campus, McNally is also a member of the Computer Advisory Committee and worked in collaboration with the Mearns Centre for Learning to upgrade the library’s multi-media rooms.

Not that he’s given up on his recording background. Just as this interview was happening, McNally was completing his latest CD collaboration with the School of Music’s Colin Tilney—an internationally renowned harpsichord, clavichord and fortepiano artist—and has also recorded albums for the Lafayette String Quartet and music for filmmaker and composer John Celona. “I also work with external people, like Victoria Symphony’s Terence Tam and his wife, the pianist Lorraine Min, and Symphony cellist Brian Yoon, as well as Pacific Opera,” he says.

What brings this level of classical talent to UVic, rather than record at the Royal Theatre? “We’ve got a good recital hall that’s quieter than any of the options downtown,” he says. “And we’ve got great pianos in our Steinways.” There’s also the presence of McNally himself. “It’s a good combination,” he agrees. “Certainly with Pacific Opera’s Young Artist series, they’re looking for an education side to it—not just someone to do the recording, but someone to speak to that experience as well.”

McNally has also started collaborating with local radio stations CFUV and CBC, the latter of which he assisted with their recent “Blues for Esi” concert supporting Giller Prize-winning author and UVic alumna Esi Edugyan’s Half-Blood Blues as a contender for the Canada Reads competition. “We sent a student down and by all accounts he did a really great job,” he says. “That was the first inkling that we could be a valuable partner for doing remotes, because CBC simply can’t afford to bring people over from Vancouver anymore.” McNally looks at both this kind of community engagement and the increasing popularity of his sound courses—demand for which has more than doubled since he came on board—as evidence that his work here has only just begun. “The studios still have plenty of room to grow,” he says.

Another progressive initiative he has spearheaded is the digital live streaming of School of Music concerts. “We’re doing really, really well with that—we’ve actually maxed out the server a couple of times,” he says enthusiastically. “A lot of it depends on the event, of course, but we’re getting regular listeners in Toronto, the UK and Germany. Even if we’re getting 30 or 50 more people listening live, that’s more people spreading it around.” 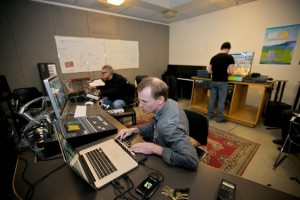 Given all McNally does at UVic—in addition to his personal creative collaborations as part of the live electronics trio The Krells—does he ever miss the rock & roll lifestyle? “Yes,” he hedges. “I miss the environment, and I miss the people who are drawn to work in big studios . . . the hours, not so much.” He pauses and laughs. “I do miss the scope of the projects—working on something that goes out to that many people in the world is a pretty cool feeling.”

But so is training the next generation of recording artists.