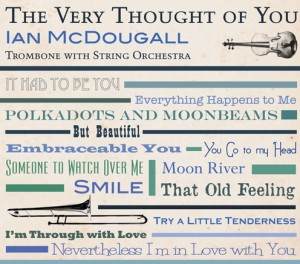 A gorgeous collection of 13 jazz standards featuring McDougall’s signature trombone backed by a lush string section, The Very Thought of You—produced by Ian’s wife, Barb McDougall—has been nominated in the “Instrumental Album of the Year” category. (In case you’re curious, his disc is up against the likes of Five Alarm Funk’s Rock The Sky, Hugh Sicotte & Jon Ballantyne’s Twenty Accident Free Work Days, Pugs & Crows’ Fantastic Pictures, and the Ratchet Orchestra’s Hemlock.) 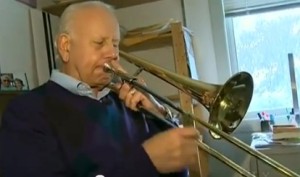 “Barb and I are overjoyed about the Juno nomination,” says McDougall. “This CD however, could never have been produced without the support—both financial and moral—of Jim Crawford, Tony Gage and the other generous partners involved in the forming of Ten Mile Music Production. Our gratitude also goes out to the fine musicians on the CD, the magnificent arrangements by Rick Wilkins and all those involved in bringing the production
to completion.”

CTV Vancouver Island talked with McDougall about the nomination on their February 19 broadcast, which you can watch here. (Scroll down to “Arts & Lifestyles.”)

As reported earlier on this blog, $10 from every $20 copy of The Very Thought of You goes directly to McDougall’s “one potato” student benefit fund—officially titled the Ten Mile Fine Arts Student Assistance Fund. Back in December 2012, McDougall presented Fine Arts with a cheque for $16,000, the first payback from the CD to the fund. “That’s the real bonus,” says McDougall of the CD. “Students in the Fine Arts now have a fund to turn
to in times of need.” 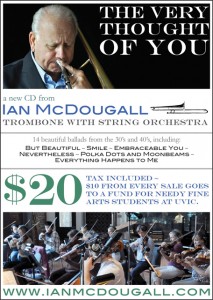 McDougall is no stranger to the national award scene. “I’ve been a significant part of many Junos as a musician and writer, particularly with Rob McConnell’s Boss Brass,” he says. “I have one on our mantel as a soloist, writer and conductor with the Brass Connection in 1982.” He has also received Best Big Band at the National Jazz Awards, Grammy Awards with the Boss Brass and a SOCAN Established Composer Award.

If you haven’t picked one up yet, The Very Thought of You is available in the Fine Arts office, UVic’s Bookstore, Arts Place cafe, the School of Music, and Phoenix Theatre, as well as Lyle’s Place, Larsen Music and Munro’s Books. Online, you can find it at CD Baby or through McDougall’s own website.

Winners of the 2013 Juno Awards will be announced on April 21 at a gala ceremony in Regina. We’re already cheering for Ian!

Update: unfortunately, The Very Thought of You didn’t win the Juno, which went instead to the album Fantastic Pictures by the Vancouver band Pugs and Crows.