For someone who has built his career working behind the scenes, the spotlight is definitely on Theatre alumnus Nathan Medd (BFA, ’01). Having spent the past five years as the National Arts Centre’s Managing Director of English Theatre, Nathan was announced as the new Managing Director of Performing Arts for the Banff Centre for Arts & Creativity, effective August 27, 2018. 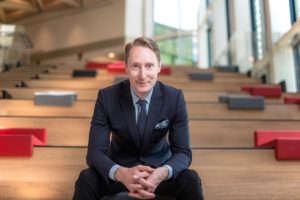 “Banff Centre is an exciting place to support the performing arts for the next phase of my career,” says Medd. “So many companies I have worked with over the years have created extraordinary works at Banff Centre that have toured Canada and the world. I’m very grateful for the chance to help the artistic faculty and visiting artists to do their very best work, and to help one of Canada’s most enduring arts organizations thrive.”

“I am thrilled that Nathan will be joining our Banff Centre team,” says Howard Jang, Vice President of Arts and Leadership at Banff Centre. “Nathan is one of the country’s brightest stars in cultural management and his leadership in working with our Performing Arts directors and Arts programs will strengthen Banff Centre’s place as Canada’s leading resource for the advancement of arts and culture.”

An active volunteer, Medd serves on non-profit boards including plastic orchid factory, a contemporary dance company in Vancouver. He serves as chair of the large theatres caucus of the Professional Association of Canadian Theatres. Medd will also soon complete a liberal arts graduate degree from Harvard University in Management, as well as a graduate certificate in Non-Profit Management.

“We are so pleased that Nathan is joining the Banff Centre team during this exciting time,” says Janice Price, President and CEO of Banff Centre. “Nathan has worked with some of the greatest artists and arts administrators in Canada, including Peter Herrndorf, former President and CEO of the NAC; he also served as producer to some of Canada’s most extraordinary theatre artists, including Jillian Keiley, the Artistic Director of the NAC’s English Theatre, and Kim Collier, the award winning director, creator, actor and co-founder of Vancouver’s Electric Company Theatre.”