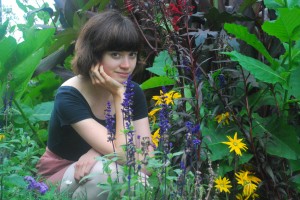 Last year, it was Department of Writing alumna Esi Edugyan who made international headlines by appearing on the famed Man Booker Prize shortlist—only one of the five major literary prizes for which her sophomore novel, Half-Blood Blues, was nominated. But the good folks at Booker seem to have developed a taste for UVic writers: of the three people awarded the prestigious Booker Scholarship at England’s University of East Anglia, two have been Writing graduates—inaugural recipient D.W. Wilson, and current winner Eliza Robertson. And if Edugyan’s success (and Wilson’s own prize-winning streak) is any indicator, Eliza Robertson will be a name to remember in the years to come.

Already a talent to watch before she even graduated in 2011, Robertson won the 2010 PRISM International fiction contest (first runner-up? D.W. Wilson), was shortlisted for 2010’s acclaimed Journey Prize (2009 winner? then-UVic graduate student Yasuko Thanh), picked up The Malahat Review’s 2009 Far Horizons Award and was also one of the student creators of the 2011 Leo Award-winning web series, Freshman’s Wharf. Not bad considering her original major was political science and she didn’t even transfer to creative writing until her third year at UVic.

“There was this moment when I was studying for midterms—philosophy and poli-sci—and I was just miserable,” Robertson recalls. “And my brother, who was still in high school, was writing a poem for his class and I was very envious of that. So the week after that midterm, I walked across Ring Road to Fine Arts and changed my faculty. It all happened very quickly.”

Score one for spontaneous decisions. Had Robertson stuck to her original plan of becoming a lawyer, she wouldn’t already be on a list of acclaimed Writing graduates that includes the likes of W. P. Kinsella, best-selling fantasy writer Steven Erikson and noted aboriginal author Richard Van Camp, plus recent award-winners and nominees Deborah Willis, Matthew Hooton, Madeline Sonik and Steven Price. But it’s Dave (D.W.) Wilson whom Robertson singles out as being a positive influence on her own writing career.

“It’s odd being on this parallel track with Dave,” she admits. “If he didn’t exist, I would be very naive about what the next step is, and I wouldn’t already have publishing on my mind. But it was on my mind in my fourth year at UVic, because Dave was already going through the process of submitting to agents. He definitely blazed the trail for me.” Robertson pauses and offers a shy laugh. “It’s convenient, but kind of daunting.” 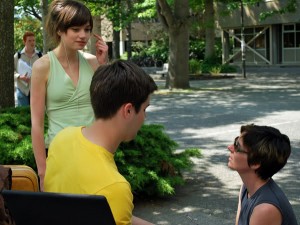 The Booker Prize Foundation-sponsored Booker Scholarship covers both academic fees and the living and travel expenses of a Commonwealth student enrolled in UEA’s creative writing (prose) MA. But considering that Wilson had already won it, Robertson didn’t think much of her own chances. “I thought lightning wouldn’t strike in the same place twice—that they wouldn’t give it to another Canadian, let alone another UVic student,” she chuckles. But Robertson quickly realized this wasn’t a case of who you know but where you come from. “I’ve honestly come to realize what a fantastic Writing program UVic has,” she says, citing influential instructors like Lorna Jackson, John Gould, Bill Gaston and Maureen Bradley.

Due to complete her UEA MA in August 2012, Robertson is currently finishing up her debut collection of short stories, as well as working on her first novel; future plans involve pursuing a PhD and an agent. And, just as we were wrapping up this interview, she got word that the 5,000-word manuscript which nabbed her the Booker Scholarship had just been shortlisted for a British short story prize—judged by acclaimed UK author Roddy Doyle, no less.

When asked if she considers herself an overachiever, Robertson just laughs. “Probably,” she says. “But it’s the cycle too—once you realize you can actually win something, then you can’t let yourself stop trying.” She pauses and seems to consider her accomplishments over the past few years, broken down like the chapters in a book. “It’s all a bit loopy, really.”