When the call went out in search of a new professor for the University of Victoria’s Department of Visual Arts, applications came in from across the country — yet the latest person to join the celebrated teaching faculty is an alumni artist who ultimately came from our own backyard. Starting July 1, 2018, the Victoria-based Rick Leong will become UVic’s new assistant professor in painting and drawing. 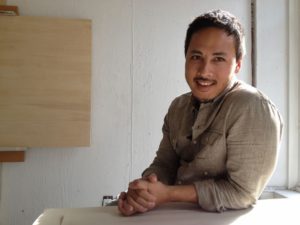 “It feels like an incredible privilege to come back to a place where I learned so much as a student, to be able to contribute to the education and formation of the next generation of artists in this community,” says Leong. “While I grew up in many different places, I never really felt attached to any one place until I found Victoria.”

A painter who uses the language of landscape to explore experiences of space and place, Leong’s practice is drawn from observation and influenced by historical Chinese art forms.

“I believe in fostering innovation through interdisciplinary experimentation, and that painting and drawing can form a powerful foundation from which to explore ideas and methods,” he says. “I’m passionate about painting, but I’m also always looking for ways that painting can inform explorations in other media.”

After receiving his BFA from UVic’s Visual Arts department in 2003, Leong earned his MFA from Concordia University in 2007 — after which his thesis work was acquired by the Montreal Museum of Fine Arts. A finalist in the Royal Bank of Canada’s Painting Competition (2008), he has also had notable solo exhibitions at the Art Gallery of Greater Victoria, Montreal’s McClure Gallery and the Anna Leonowens Gallery in Halifax, as well as participating in many group exhibitions at various Canadian and international spaces.

Being based in Victoria hasn’t slowed Leong’s career at all, with work held in the permanent collections of the Canadian Art Foundation, Canada Council Art Bank, Foreign Affairs Visual Art Collection, the Collection de Prêt d’oeuvres d’art, Musée National des beaux-arts du Québec and the AGGV, among others.

“The island is definitely the place I call home, and it is in large part because of the people and relationships that I have made here,” he says. “Home is where your community is.” 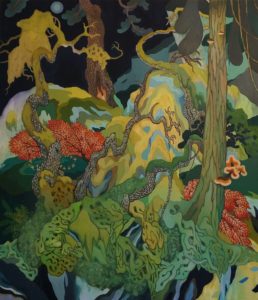 “Known for his immersive layered paintings, Rick Leong is an artist of national repute and his work represents a unique voice in Canadian painting,” says Visual Arts chair Paul Walde. “He joins a department with a rich history in painting, boasting distinguished alumni and faculty in this area of research, and we have no doubt that he will enhance this reputation both here in Canada and abroad.”

Leong is looking forward to having “a positive impact” on Visual Arts students.

“It is incredibly rewarding to think that what we do as teachers creates a stronger community of creatives through individual development as well as fostering community relationships,” he says. “I will strive to enrich students’ education experience, encourage diverse perspectives and voices, and contribute to the Visual Arts Department’s goals of excellence and innovation.”