It may seem unusual to pair a classical violist with a folk band in concert, but the two acts  performing in the School of Music’s inaugural Emerging Artists Alumni Series concert have a lot in common. Nothing short of eclectic, these artists are skilled on multiple instruments and in a wide-range of musical styles. This kind of multiplicity gives these artists a leading edge as they break into professional careers in music. 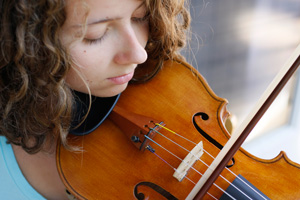 Violist Sarah Tradewell (B.Mus ’14) recently graduated from the School of Music and already has a busy schedule of teaching and performing. “It’s only been a few months, but a bunch of opportunities cropped up that I was overjoyed to accept,” says Sarah.

Raised in Northern Saskatchewan, Sarah had a rich musical upbringing inspired by her music-teacher mother. She gave her first performance at age three, was involved with musical theatre from age six, and insisted on learning both fiddle tunes and Classical music when she started violin lessons.

To this day, Sarah continues to hone a range of skills and pursue diverse opportunities. Her broad repertoire of experience, paired with her talent and tenacity, is proving advantageous. The evidence is in her fall schedule: teaching the Conservatory Fiddles at the Victoria Conservatory of Music, touring with acclaimed tenor Ken Lavigne, playing in several concerts with the Victoria Symphony, and playing the role of Jane Bennet in Langham Court’s upcoming production of Pride and Prejudice in October (adapted by UVic Fine Arts alumna Janet Munsil). Sarah can also be heard regularly with Black Angus at the Irish Times pub in downtown Victoria.

“I’m pretty happy with my life right now and the diverse performance opportunities I have. I don’t know what my future holds yet, but I do know that I want to be performing, whether it’s orchestra, chamber, new music, or folk music.” 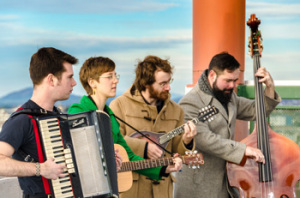 Members of the chamber-folk band West My Friend—featuring Eden Oliver (B.Mus ‘08), Jeff Poynter (B.Mus ‘11) and Alex Rempel (B.Mus ’12), as well as Nick Mintenko—believe their diverse experiences have made them more well-rounded artists. From touring musician and church music director to house painter, and non-profit program director, “our journey since graduating has been very much one of chiseling out lives for ourselves and exploring the different things we want to put our energies into,” says Poynter. A lot of that energy has gone into preparing for their upcoming tour through BC, Alberta, Idaho, Washington and Oregon this October and November. 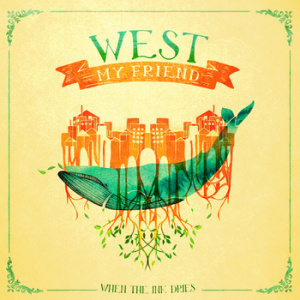 Poynter describes West My Friend’s sound as “cascadian third-wave indie prog chamber folk roots music.” Apparently this is what happens when you put an accordion, mandolin, guitar and upright bass together with four part harmonies and three music degrees. Having formed five years ago, the band has two albums under their belt as well as multiple tours. Their most recent tour across Vancouver Island and the Gulf Islands turned some heads—given that they were traveling by bicycle. “Many people were shocked that we carried all of the gear and instruments,” chuckles Poynter.

Both Tradewell and Poynter couldn’t say enough about the value of performing—on campus and in the community—during their time at UVic. “Perform as much as you can. You never know who will see you,” stresses Tradewell. Whether you’re fiddling at pubs, singing in local choirs, or accompanying a musical, Poynter emphasizes that “the connections you make with other musicians and people in the music business can be priceless and can have far reaching impacts you can’t imagine yet!”

The School of Music’s inaugural Emerging Artists Alumni Series concert will take place at 7:30 p.m. on Sunday, September 21 in the Phillip T. Young Recital Hall. Tradewell will perform solo works by Bach, Hindemith, Stravinsky and others while West My Friend plays songs from their latest album along with some new and old material. Chances are good that Tradewell will join the group with some fiddle stylings. Admission is by donation and proceeds will benefit further Emerging Artists Alumni Series events.