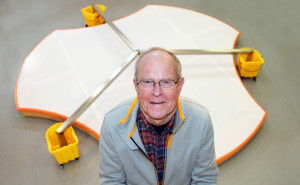 Mowry Baden in his studio, with the start of his Guggenheim-funded sculpture “Trisector”

Well-known contemporary artist and sculptor Mowry Baden, a professor emeritus with the Department of Visual Arts, can now add one of North America’s most prestigious awards to his long list of honours. Baden is one of only two Canadians receiving a 2014 Guggenheim Fellowship and is among a diverse group of 178 scholars, artists, and scientists selected from a field of almost 3,000 applicants.

Baden is only the sixth UVic scholar to be awarded a Guggenheim and our first creative artist to receive the honour. The John Simon Guggenheim Memorial Foundation announced this year’s recipients on April 10 in its 90th annual competition for the US and Canada.

“I’m very happy,” says Baden of his one-year fellowship worth $55,000 US. “My request was for money to help develop a sculpture that addresses the sense of touch—in art parlance, that’s called haptic. The sculpture will be pretty complex and will, of course, also have a visual component. It is a piece that will be able to be moved from place to place.” His Guggenheim-funded sculpture, titled Trisector (seen here), is already being constructed. 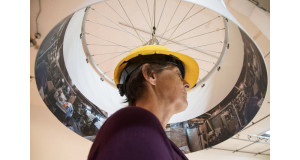 Best known locally for his public art sculptures and complex tactile works, Baden is a prolific artist and recipient of numerous grants and awards including a 2006 Governor General’s Award in Visual and Media Arts. He will also be speaking at the upcoming event Reclaim the Streets: A Symposium on Art and Public Space, running April 25 and 26 at Open Space. Baden also contributed the piece “Revolving Basement” to the recent solo exhibition The Basement Panoramas by fellow Visual Arts faculty member Sandra Meigs.

“The Department of Visual Arts is proud to congratulate Mowry Baden on being awarded a prestigious Guggenheim Fellowship,” says department chair Daniel Laskarin. “He was one of two professors who joined UVic in the 1970s and who led the development of our program into what it is today. His students are among the most successful artists across Canada and beyond, and his own artistic work is internationally celebrated.” 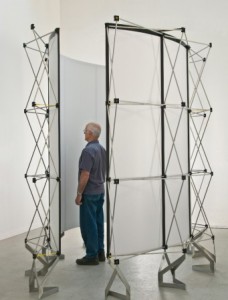 Notable among Baden’s former students are the likes of Sobie Award winner Christian Giroux, Yale’s director of sculpture Jessica Stockholder, current Visual Arts professor Robert Youds and 2014 Governor General’s Award winner Kim Adams. In his GG interview, Adams mentions the influence Baden had on the development of his work. “When we learned art history, it was through somebody who knew art today—and that was Mowry Baden,” he says. “We started seeing things that were more real—the perception of the colours, the scale and the size, what happens between it and you and that space between. For me, it was the street level, I was trying to pull that into the art.”

You can read more about Baden’s life and artistic legacy in this Canadian Art magazine feature article “The Great One.” 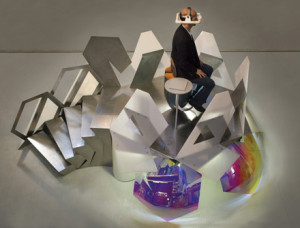 “UVic has for many, many years has had a popular and critical sculpture program,” says Baden. “A lot of these people who have done well out in the world are sculptors who have been trained by me, my friend Roland Brener, who passed away, and by Daniel Laskarin . . . it continues to be a very strong program.”

Reflecting on the development of the department under his guidance, Baden feels they created something unique. “I think it’s true that no other department was offering what we could offer—Roland with his uniquely English exposure and me with a Southern California background—that’s kind of a unique combination. I can’t think of another Canadian university or art school that had that kind of blend.” 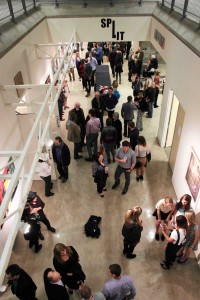 Baden was also instrumental in developing not only the Visual Arts program but the building itself. “When I was the chair of the department in the early ‘90s, we were singularly fortunate in getting a new building, and I had a great deal to do with its design—not that I designed it, but I was the point man for the department,” he recalls.

“A little stroll through the building is important when you want to see how the pedagogy is reinforced by the structure of corridors and studios and shops, the way they are linked and related with one another. It’s not a thousand percent success, you can never achieve that, but I think the building does a great deal to help with practice.”

As mentioned above, Baden will also be participating in Reclaim the Streets: A Symposium on Art and Public Space at Open Space on April 25 and 26. A fascinating and wide-ranging interdisciplinary symposium on art in the public space, Reclaim the Streets will bring together artists, scholars, curators, activists, community organizations, and engaged citizens to examine and discuss the goals, perceptions, problems, and possibilities of public art in Victoria. Along with Baden, Fine Arts will be represented by the likes of Visual Arts MFA Kika Thorne and former Department of Theatre alumni and instructor Dr. Will Weigler.

Often characterized as “midcareer” awards, the Guggenheim Fellowships are intended for men and women who have already demonstrated exceptional capacity for productive scholarship or exceptional creative ability in the arts. Scores of Nobel laureates, Pulitzer Prize winners and eminent scientists are past Guggenheim fellows, including Henry Kissinger, Linus Pauling and Ansel Adams.