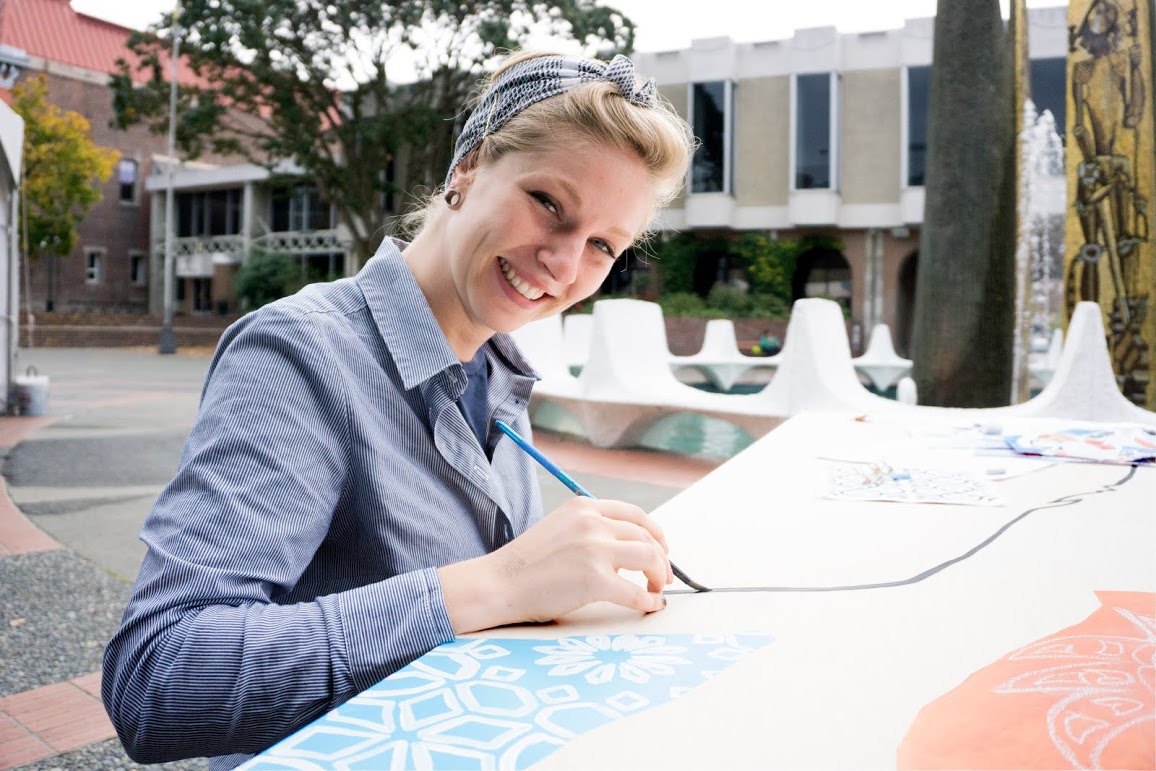 Jody DeSchutter working on her Centennial Square panels in fall 2015 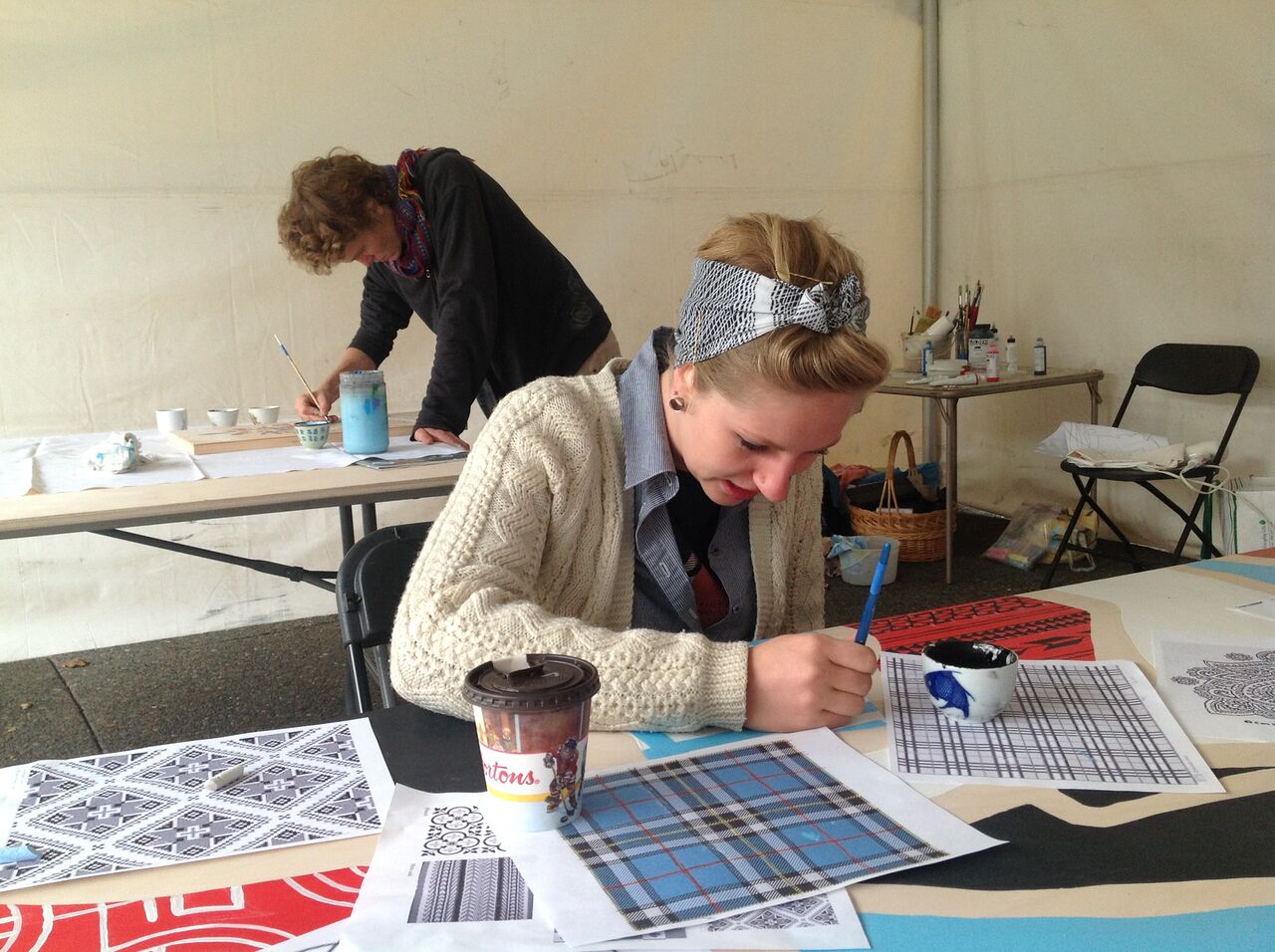 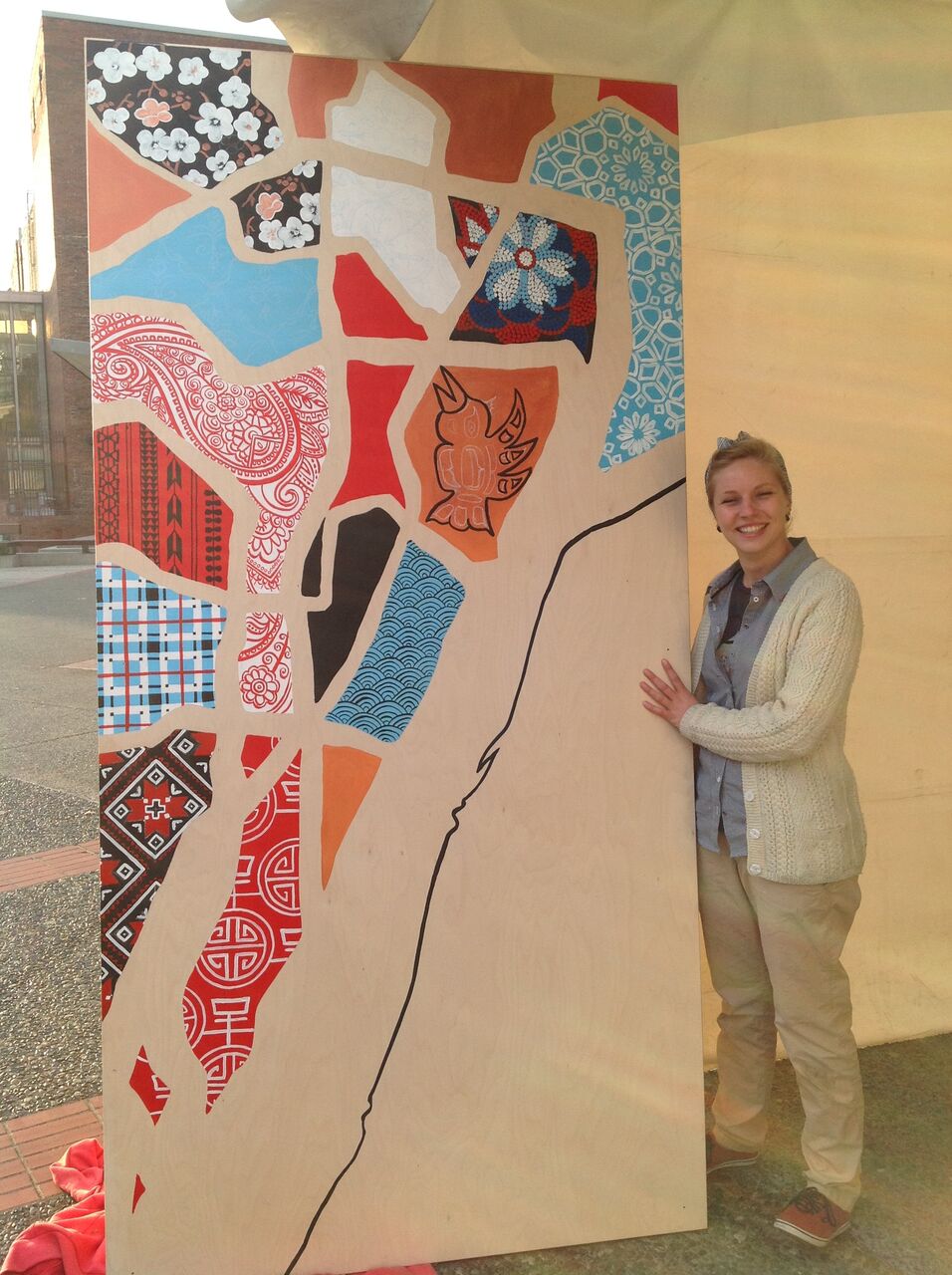 DeSchutter shows off her in-process panel, with the fabric patterns and stylized tree design visible 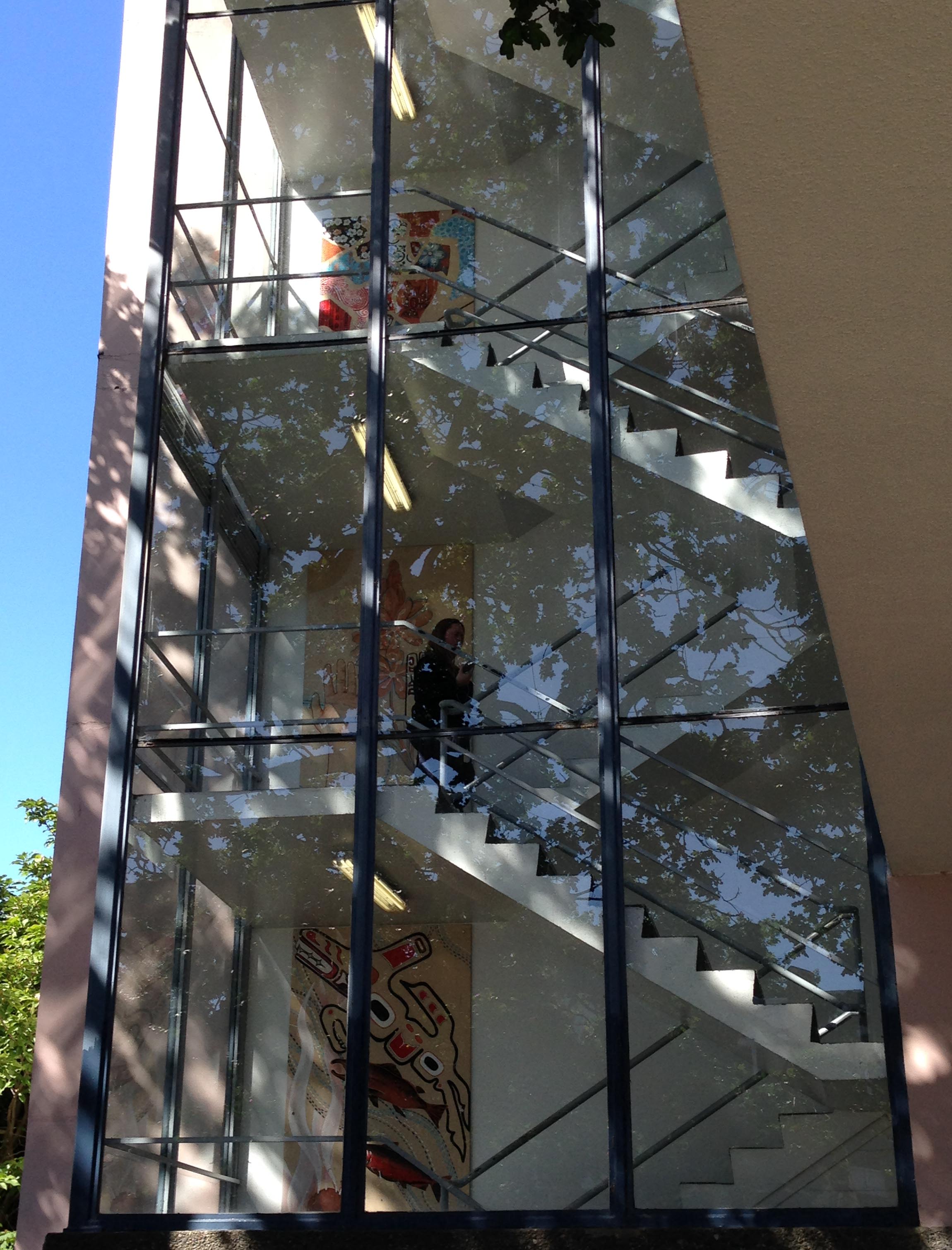 DeSchutter’s installed panel in the parkade stairwell, visible on the third floor 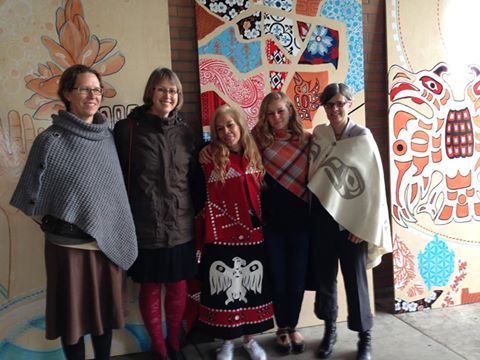 A panoramic shot of DeSchutter’s panel, visible with the Garry oak tree that helped inspired the design 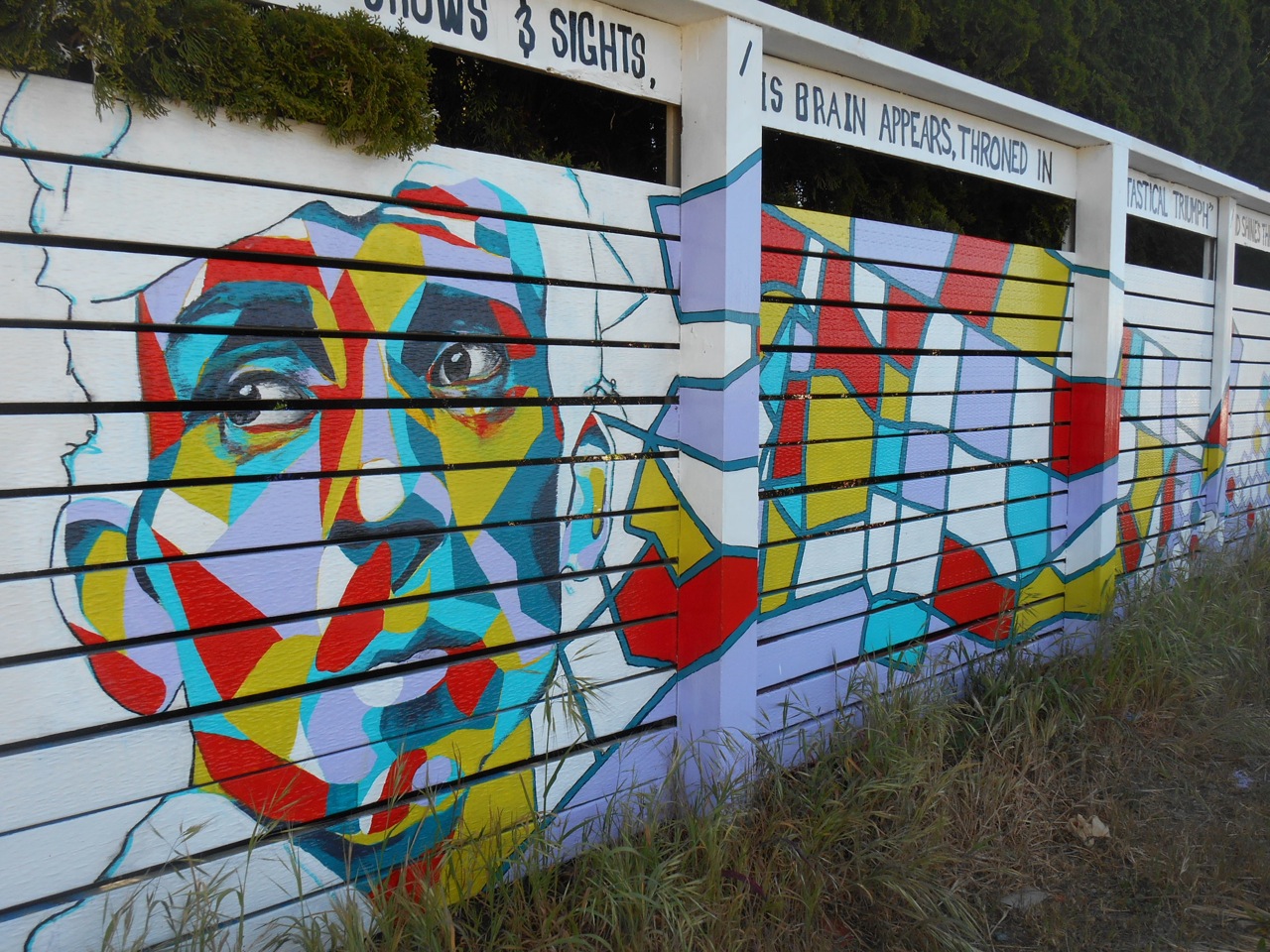 A close-up of DeSchutter’s Fernwood mural, painted to address problem graffiti in the neighbourhood 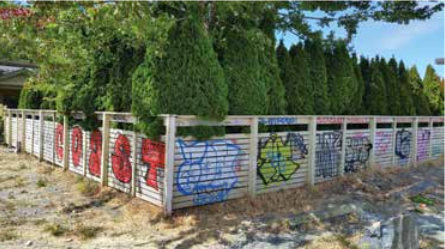 A “before” shot of the Fernwood wall

An “after” shot of the same wall, now with mural 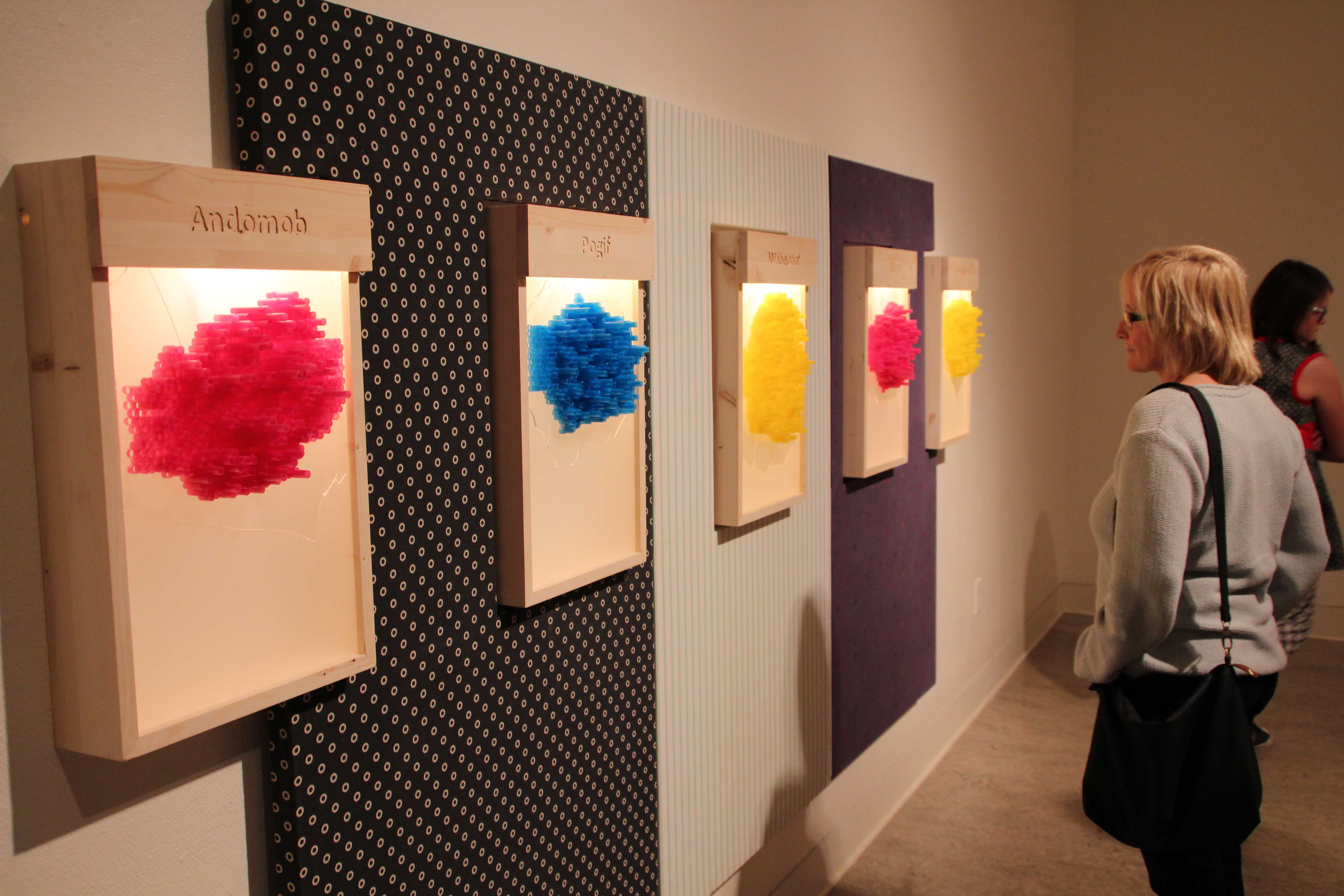 An example of DeSchutter’s work in the 2015 BFA show

All too often, art is perceived as only being seen in galleries, when in fact just the opposite is true: art is all around us, all the time. That’s one of the points of two new Victoria mural projects involving Visual Arts alumna Jody DeSchutter.

The first project—a four-panel project titled “Infusing Spirits” now installed at downtown’s Centennial Square parkade—saw DeSchutter and two other young artists working with three professional artists as mentors. But in the second—a long line of fencing that was a graffiti hot-spot on Fernwood’s Gladstone Avenue—the roles were switched, with DeSchutter becoming mentor to a group of teenage artists. Involvement with this kind of  community engagement is typical of UVic students, faculty and alumni, and shows the impact our creative efforts can have on the city.

The impact of public art “can be huge,” says DeSchutter, who was also involved with a public art installation in her BC hometown of Lake Country last year. “Public art is a way of engaging people with where they are physically—especially when everyone is so involved with the cyberspace world. When you see something beautiful on the wall, it makes you stop and think about your surroundings more. It takes you out of your head.”

DeSchutter, who graduated with a BFA in 2015, seeks to marry a sense of tradition and modernity in her painted works, mixing abstraction with academic realism. “I was really partial to painting and sculpture in university,” she says, noting that the murals aren’t “necessarily representative of a large body of my work, but it’s becoming a part of my overall practice.”

Her panel in the downtown parkade mural—one of four acrylic-on-birch wood panels encompassing four views of Victoria (parks, city, harbour and skyline)—uses a patchwork fabric motif intermingled with stylized branches of a Garry Oak to represent the weaving of history and multiculturalism, as well depict the project’s theme of “infusing spirits.” DeSchutter is pleased that it’s one of three permanent pieces aimed at enhancing the downtown parkades. (One of the other projects at the Yates Street parkade is designed by fellow Fine Arts alumnus Scott Amos, while the other will feature work by acclaimed Susan Point, whose work is on view as part of the Coast Salish collection in UVic’s Cornett Building.)

“It makes for an interesting marker in all of our careers as individual artists, but also as a point in time for us—where we were at that particular moment—and to see how perception changes around it in the years to come,” says DeSchutter. “It was a good opportunity for artistic dialogue too, mixing the First Nations voice with our more contemporary styles. It’s looking forward in the hope that the dialogue continues.”

City of Victoria arts and culture co-ordinator Nicola Reddington spoke to the local Times Colonist newspaper about the $10,000 mural project. “I think when we put value into the parkades, it makes them feel safer. By beautifying, it just makes them more welcoming and inviting for people.”

When asked about switching roles and becoming mentor on the Gladstone Avenue location of Victoria’s Create Community Colour Mural Program, DeSchutter says she was glad of the experience gained while working on the downtown mural. “I took a lot of what I learned on the downtown project and applied it to this one. It was amazing to see how much work you actually have to put in as a mentor.”

DeSchutter, now moving to England, credits her Visual Arts degree with giving her the practical and conceptual ability to create public projects like these. “The sharing of ideas—both good and bad—was one of the most helpful parts of my education,” she says. “It can be scary to put your ideas out there, but it gets you out of the habit of being the typically reclusive artist. Being part of a community of artists in the faculty, learning that collaborative practice, was fantastic.”