Some students seem content to do the bare minimum; others delight in going the extra distance. Count current Department of Writing student Andrea Routley in the latter camp. In addition to the regular requirements of undergrad life, Routley is currently in the process of launching Plenitude, a brand new online queer literary magazine. 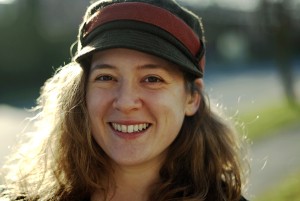 Issue #1 is set to debut in late August (featuring a piece from 2012 Journey Prize nominee Nancy Jo Cullen, among others), and Routley says the inspiration for Plenitude simply came from a lack of LGBQT literary magazines. “I went looking for queer literary magazines in Canada and found only one still accepting submissions, No More Potlucks—which limits text contributions to 1,500 words. So apart from that, to the best of my knowledge, Plenitude is the only queer literary magazine in Canada.”

While there are plenty of queer books being published in Canada, Routley—editor of the 2010 collection, Walk Myself Home: An Anthology to End Violence Against Women (Caitlin Press) and a writer whose work has appeared in the likes of The Malahat Review and Monday Magazine—feels there’s still a place for a project like Plenitude. “These kinds of publications can’t take the place of a queer literary magazine, as much as any other ‘non-queer’ novel or collection could replace literary magazines in Canada such as The Malahat Review or Prairie Fire,” she says. “Literary magazines serve the much-needed purpose of fostering the growth of emerging writers and building communities of writers.” And while some literary mags have released specifically queer-themed issues, Routley (also a poet who was shortlisted for the 2008 Rona Murray Prize for Literature) doesn’t feel that fills the same need for writers.

“I recognized that the ‘queer’ in my own writing was typically expressed as a total absence of any sexuality or queer characters at all. I thought, am I really avoiding something? So I set about, with purpose, to write a ‘gay story.’ I did not want to write about coming out or shame—two totally valid themes—but ones that I didn’t feel interested in at this point in my life; so much of what I have seen or read when it comes to film or fiction with queer characters was about those two things . . . . Many heterosexual readers still look for the shame, or ‘coming out’ experience. It is what they expect to read; it is what many think it means to be queer.”

Writing is one thing, but Routley’s other inspiration for Plenitude simply came from her own perspective as a reader. “I want to read hundreds of stories and poems by other people, to discover how they express their lives and interpret this world,” she says. “And if such a venue exists, I hope it will encourage other writers who, like myself, may have been censoring their own writing—maybe without even realizing it.” 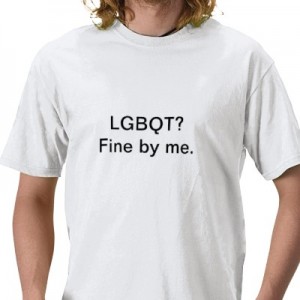 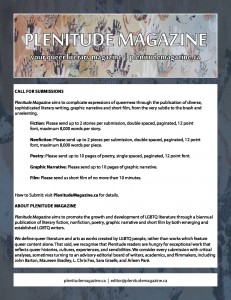 Interested in submitting? You can contact Andrea Routley at editor@plenitudemagazine.ca or via the magazine’s website at plenitudemagazine.ca—where you can also find full submission guidelines. (Plenitude is also accepting contributions; see their website for more about the benefits of becoming a “Friend of Plenitude.”)

Routley will also have a Plenitude table at the Victoria Pride Society’s annual LGBQT literary event, Pride & The Word, on July 7 at Ambrosia Conference Centre on Fisgard.

As for the future of Plenitude, Routley is optimistic. “The great thing about an electronic publication is that it’s relatively cheap to produce and distribute—so those are the main factors in my decision to make it electronic at this time. In the future, I hope to offer the classic paper-based object as well.”