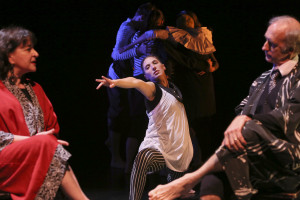 Conceived, directed, and choreographed by Alexandrowicz with text by recently retired Writing professor Lorna Crozier and Governor General’s Award-winning poet Erin Mouré, Mother Tongue ran May 14-18 at Vancouver’s Scotiabank Dance Centre. Presented by Alexandrowicz’s Wild Excursions, the productionuses a company of six actors and two dancers to explores the poets’ texts. And chalk one up for interdisciplinary mingling—the germ of Mother Tongue came from the 2011 Fine Arts faculty retreat, where Alexandrowicz met Crozier. From that opportunity came a nearly $175,000 SSHRC grant that resulted in the production that Vancouver theatre reviewer Jo Ledingham described as “cerebral . . . and mind-expanding.” 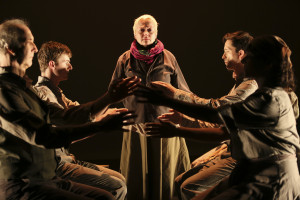 Georgia Straight reviewer Colin Thomas was also quite taken with the production, noting in one scene that, “Alexandrowicz’s choreography is powerfully simple . . .  the performers sit in two lines of stools and face one another, their arms raised . . . their hands float away: we know we’re in the memory of a destroyed church. In moments like these—and there are more than enough of them to make the evening worthwhile—Alexandrowicz and his company catch the ineffable in their net.” 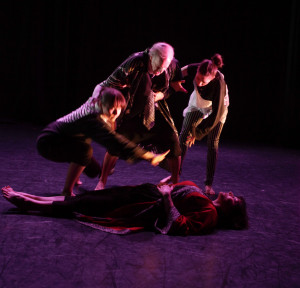 In his director’s notes, Alexandrowicz explains his inspiration for Mother Tongue: “If dance is a kind of ‘visual poetry’, so poetry is perhaps ‘dancing with language’”—and clearly, he has found success with this form. Describing the director/choreographer as “a big thinker who has gone on to explore and challenge the way language works or fails to work,” Ledingham notes the show has in fact inspired her to return to poetry. “I have all but given up on poetry but I will now seek out Crozier and Moure’s work. And I will try to let linearity go and give searching for ‘meaning’ a rest.”

Ledingham offers a concluding thought: “Alexandrowicz doesn’t let you out of the theatre without a desire to learn, to discover and to explore. Challenging your brain is seldom packaged so gorgeously.”

Fingers crossed for a local production!