Kevin Kerr is coming full circle. Back in 2002, the noted playwright received the Governor General’s Literary Award for Unity (1918); now a professor in the Department of Writing, Kerr is directing his first show for Phoenix Theatre this month—and it’s Unity (1918), a play that is regularly studied in first-year theatre classes. More significantly, however, it’s the first time he’s ever directed it. 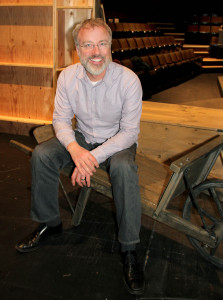 Set during the final few weeks of World War I, Unity (1918) is a touching and darkly comic tale about the fear and desire sparked by the convergence of the Spanish Flu pandemic and a returning soldier in the small town of Unity—a real town in Saskatchewan. But while this critically lauded play has been mounted repeatedly across Canada over the past decade, Kerr—an accomplished director himself—has never had the opportunity to tackle it before.

“I never really thought of directing it,” he says of Unity, which he’s also adapting for the screen. “There was always another director interested in doing it.” But after Kerr was hired by the Writing department in 2012, Phoenix offered him the chance to direct a mainstage show—and they were already considering Unity. “It was such a generous welcome to the Faculty of Fine Arts,” he says. “Granted, I felt a little funny about directing, as my relationship to it had always been from a writing perspective. And since I’d seen a lot of the other productions, I felt a little intimidated—how do I let go of those other shows, and shake up my own expectations of what the script is?” 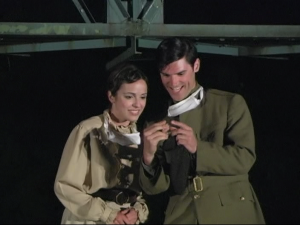 A good question for any writer tackling his own material. “Sometimes I say to myself, ‘What was I thinking when I wrote that?’,” he laughs. “But overall, I’m enjoying the process of trying to figure it out again, instead of creating it new.”

This is also only the second time Unity has been performed in Victoria; the first was Theatre SKAM’s 2004 production featuring eight Phoenix alumni in both cast and creative roles. (For Phoenix fans, here’s the impressive list, which almost reads like a “who’s who” of current theatre: Kate Braidwood, Annette Dreeshen, Amiel Gladstone, Lucas Myers, Megan Newton, Matthew Payne, Zachary Stevenson and Jennifer Swan.)

Listen to this podcast of Kevin Kerr’s March 14 preshow lecture about Unity (1918). 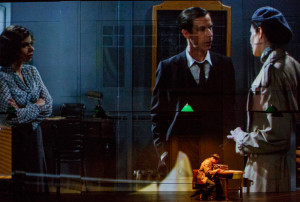 Kerr co-founded and is now an artistic associate of Vancouver’s Electric Company Theatre—a collaborative company that specializes in “spectacular physical and visual imagery, cinematic vocabulary, and the quest for authentic connection in an accelerated culture.” He has earned accolades for his Electric Company productions (including the likes of Brilliant!, The Score, and Dona Flor and Her Two Husbands) and for his skill in conceiving plays that push the boundaries of theatre itself. But how does he square recent work like the acclaimed film/theatre hybrid Tear The Curtain! with an early show like Unity?

“This is my ‘straightest’ play, so it lends itself to a particular style of direction,” he admits. “It’s not quite the process I’m most familiar with—usually, with Electric Company, we create and build a show collaboratively—but I’m finding it really satisfying to work in a more traditional model.” But, he hints, we can still expect a few surprises with the upcoming Phoenix production. “It’s going to have some great physical elements that give us both the strength and scope of the Prairies, but still play with a sense of intimacy.”

Clearly, Kerr is enjoying the process of returning to an earlier work in a whole new role. “For me, it’s the balance between finding the authenticity and naturalism in the acting, but still allowing the piece to have the necessary theatricality to really embrace what theatre does—to activate our imaginations and let us be participants in an image world that’s not as literal or singular as a photograph,” he says. “It’s fun to find those parts in the play.”