A shifting focus: from photography to film

Like many outstanding students, the term “overachiever” is a good fit for graduating international Visual Arts major Guochen Wang. 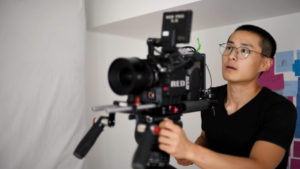 Born & raised in Taiyuan, a mid-sized city in China’s central Shanxi province, Chen went to a local international high school before looking for overseas post-secondary options. Yet his reasons for choosing UVic over an institution in the US, England or Europe may not be surprising, given his home city’s population of 4.2 million. “I visited Victoria when I was 12 and remember really liking it,” he recalls. “I liked the trees and the quiet.”

He was also attracted by the contemporary practice of UVic’s Visual Arts program, as well as its metaphorical appeal. “I was already doing high-fashion commercial photography in China, which I enjoyed, but I wanted to try something new,” he explains. “Visual Arts looks at photography as a tool to go somewhere else.”

An award-winning photographer before leaving China, Chen continued to find success during his undergrad years: not only did he mount two solo exhibits at local galleries, but he also picked up awards at both the Sidney Fine Art Show and the Victoria Arts Council’s LOOK show. “I like taking pictures of people on the street and telling a story through the lens,” he says.

Yet his future interdisciplinary path started to come into focus when he took his first video art course and then enrolled in the Writing department’s popular film production elective, where he worked on the short film Fear or Favour.

“I just fell in love with the medium,” he says. “Visual art is more about the individual—how you approach the work, creating on your own—but film is different. It’s more collaborative, where everyone is working towards the same goal. It feels different when you achieve something together.” 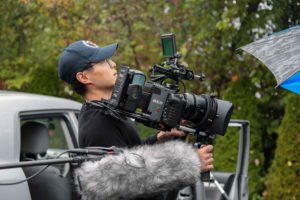 Fusing his artistic passion with tangible career goals, over the past four years Chen has founded the UVic Film Club, joined the CineVic Society of Independent Filmmakers, started his own commercial production company, joined CHEK TV’s production team (where he helped create over 20 commercials), served as the director of photography and camera operator for local company Botega Creative Ltd, worked as a sessional instructor for the Beifang International Education Group and volunteered on a number of independent films shot locally — all while finishing his undergraduate degree.

“I like the freedom to create,” he says. “Everyone in Victoria is very welcoming, and everyone in the independent film community seems to know and like each other, and the crews are very nice.”

Clearly no slacker, Chen applied for and was accepted as a screenwriting major in the Writing department’s MFA program for the 2018 fall session.

His intention is to develop a web series that uses humour to explore cross-cultural understanding. “I believe that comedy — which is itself a kind of international language that helps to connect people — is a good way to express my own feelings, inspire international students and bring together both Canadian and Chinese audiences in an understated way,” he says. “It allows cultural differences to be easily understood and it builds on shared human values by non-threatening means.”

Much like his experience with street photography, Chen finds humour in the reality of everyday observations. “I can give you an example: when I first got here, I made some Canadian friends and they would greet me by saying ‘What’s up?’ — so I would look up. It’s like [the TV series] Fresh Off the Boat, except for me it would be fresh off the plane.”

While working on his MFA, he’s now getting hired for local film shoots, both independent and union (Pupstars: Christmas), as well as writing and directing his own work, like the short film Drownings. “There’s a difference between writing something in visual language as a screenplay than watching the visual language on the screen,” he explains, “but the only way you can see that is to make it.”

Despite Vancouver’s Hollywood North reputation, Chen likes the idea of staying in Victoria. “I can shoot in other cities, but I like it here: I like the environment, and there are so many talented people who work very hard.”