Some people train for years to achieve Olympic glory, but two local school groups are already sounding like gold thanks to the efforts of three local music teachers — all of whom are School of Music alumni. 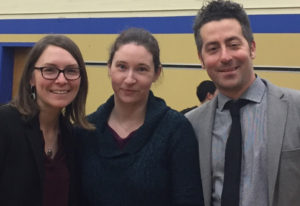 When the results of the annual CBC Music Class Challenge were announced in December, two of the six winning ensembles turned out to be from Greater Victoria: the Arbutus Mixtape Orchestra, led by Michael Mazza and Jennifer Hill at École Arbutus Global Middle School, and the Campus View Instrumental Ensemble, led by Jody Onuma at Campus View Elementary. All three are alumni of the School of Music’s Music Education program.

“We’re really proud of our students,” says Mazza. “We were just looking for something new to do in our music program, a way to fire the kids up and connect with other schools across the country doing the same thing.” And while it’s a first-time win for Mazza and Hill, this is the second time Onuma’s class has won their category, following their 2016 win for their cover of “Stitches” by Shawn Mendes.

The annual contest sees K-12 schools across the country competing to arrange and record one of 17 specially selected Canadian songs. (2017’s other winning schools were from Ontario, Quebec and Newfoundland.) Among the 17 options for songs were tracks ranging from current hitmakers like Basia Bulat, Jully Black and The Strumbellas to Canadian icons kd lang and Joni Mitchell, and the regional likes of Quebec’s Jérôme Minière and Inuktitut artists the Jerry Cans. But both local schools chose Marc Cholette’s “CBC Olympic Theme” to work with.

“CBC said if schools chose the Olympic theme, they might be able to be broadcast it,” says Mazza. “And that was part of it—I wanted the kids to be watching the Olympics with their parents and have the thrill of seeing themselves on TV.” As a result, not only does each winning class receive a state-of-the-art recording kit (valued at over $5,000), but they will now have their videos seen on CBC TV during the Winter Olympics broadcast in February.

Mazza says music is a “big part of the fabric of our school,” noting that over 75 percent of Arbutus students are enrolled in 10 performing ensembles led by their two full-time music teachers. The Arbutus Mixtape Orchestra is made up of grade 7 and 8 students in Mazza and Hill’s music classes. Their contest entry began with one class, then expanded as more and more kids became interested in the project; Mazza says the whole project took about seven 30-minute rehearsals, plus time for arrangement and recording.

“It started out just with the brass and string quartet, but we wanted to fill it out some more so we added the boy soprano at the beginning, then the vocal jazz singers in the background,” he says. “I’d wake up in the middle of the night sometimes thinking, ‘Oh yeah, we should add some clapping.’ It just organically evolved as we went along in a way we couldn’t have predicted and then came together in the end.”

One interesting aspect are the Indigenous drums being played in the video are all student-made, which Mazza says act as a “representation of the diversity of our school and our country. We also really liked the juxtaposition of the indie-rock claps and the First Nations drumming.”

Judge Julie Nesrallah of CBC’s Tempo says she “loved the performance because it had so many fun and interesting things going on: singing, drumming, the funky guitar solo, clapping and the ‘heys’ all came together to provide a dynamic, multi-layered performance that was very entertaining and moving. The whole performance was delightful to listen to.”

As for their recording-kit prize, Mazza says he’s just setting it all up and learning the software. “There are some students who are really interested in recording engineering and technology, so I’ll help them understand how it works and give them the opportunity to record some of our school ensembles,” he says. “Part of my philosophy is I want music to be part of the kids’ identity when they leave school—whether that’s playing the trumpet or knowing how to record.”

Mazza is both an alumni and sessional instructor with the School of Music (teaching, appropriately enough, a course on Music in the Middle School Curriculum). A band kid himself in high school (on trumpet), he says he always intended to become a music educator. “The best thing about going to UVic is that I basically got two degrees: music education and performance.” When asked if he still plays, he chuckles.  “You can catch me down at Pagliacci’s every second Sunday—I’ve been playing there in a klezmer band since 2001.”

While all three alumni — Mazza, Hill and Onuma — represent the kind of top-flight talent that come out of UVic’s Music Education program, Mazza singles out Music professor Gerald King as a shining example of how inspiring a music educator can be to students of any age. “Gerry was a mentor to all three of us. He set such high standards and inspired us to do excellent work with the kids. We’re lucky to have him.”

As for the course he teaches in UVic’s School of Music, Mazza brings third-year Music Education students directly into his middle-school classroom. “It’s real experiential learning on their part; for many of them, it’s their first time being in front of a large group and teaching real kids. It’s a wonderful partnership between the university and the school district.”

And while the Music Class Challenge is a great salute to music education in Canada, Mazza says it pales in comparison with the effort his students made.

“We’re really proud of our kids,” he says. “They really aspired to do something memorable, and I don’t think they’ll ever going to forget this.”