UVic’s School of Music has a pair of new conductors, and while both are young and innovative, each offers students a distinctly different tempo. Award-winning European composer and conductor Ajtony Csaba has stepped up to lead the UVic Orchestra, while Newfoundland composer and trumpet player Patrick Boyle is showing his brass with the Jazz Ensemble. Both bring with them a full score of awards and accolades—Csaba has performed with major orchestras in Europe and China, and his first opera, gentle birth, received numerous prizes, while the in-demand session artist Boyle has a pair of critically acclaimed solo albums (Still No Word and Hold Out) and was named “one of Canada’s top trumpet players and jazz musicians in general” by CBC Radio—and both are clearly happy to be on campus.

“I was looking for a remote place in the world where I can teach a little bit and work with an ensemble where I have the possibility to try out new things,” says Csaba of his shift to Victoria from Vienna, where he was chief conductor of the Central-European Chamber Orchestra and the Vienna Jeun 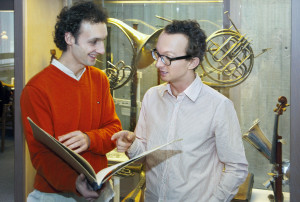 esse Choir. “It’s an excellent environment for research, to work out a mixture of practical and theoretical things. And to share my experience, which might be a little exotic here.”

For his part, Boyle—who recently performed at Carnegie Hall and is just completing his doctorate at the University of Toronto—says, “So far, so good; it’s really nice here. I’d heard good things about UVic’s jazz [courses] and I knew the music education department was a huge jewel in the crown here.”

The Transylvanian-born Csaba, whose interest lies in modern, experimental, contemporary music, is pleased with how his work has been received. “I know that what I’m doing is pretty experimental, but I’m happy the students and faculty enjoy taking part in it.” Despite the demands of teaching and conducting the UVic Orchestra, he’s still working with his ensemble in Vienna on an experimental repertory (“how to find new ways of doing a concert, using applied media, lots of interdisciplinary connections”), all of which is aimed at what he describes as “rethinking the concert.”

“Historically, we had a very long change from the Classical period, when concerts were aristocratic venues for a limited number of people, to the Romantic era, where it just became a show for a lot of people in a big concert hall,” he explains. “Now we are in the 21st century where everything is happening in parallel; we still have the Romantic approach, but a lot of new initiatives are coming up and everybody’s working out what we are doing, what it is.”

As both a jazzman and ethnomusicologist, Boyle’s interest naturally leans more toward the art of improvisation, which enhances his classes in jazz history, theory and arranging. “I like the study of music and culture,” he says. “I get great satisfaction from performing, but I do find researching different improvisatory traditions—South Indian music, bluegrass—has deepened my own performing life. It’s been a fun balance to live in both those worlds.”

Each conductor also has plans for breaking out of the Ring Road. “We have several invitations for different UVic ensembles to play off-campus, as well as in Vancouver, Toronto and different North American cities over the next few years,” says Csaba. Meanwhile, Boyle sees good potential in the city’s greater jazz community. “Much like St. John’s, Victoria seems to be a ‘build it and they will come’ kind of place. The jazz scene here is small but vibrant, and the players are of an extremely high quality. And I’d really like to develop a strong bond with local high school music programs; we need to have players coming into our school, so we really need to care about where they’re coming from.”

Boyle pauses and chuckles, seeming to speak for both new conductors as he reaches his coda. “Really, I’m just excited to contribute in any way I can.”