Four horns for the win

Winners of the School of Music’s annual Concerto Competition are usually solo performers, but in the upcoming UVic Orchestra concert on November 26, four horn players will take centre stage in a performance of Schumann’s “Konzertstück for Four Horns and Orchestra.”

Undergraduate students Sam McNally, Collin Lloyd, Sarah Mullane and Justin Malchow are horn students with Music professor Kurt Kellan. “We have a really close-knit studio,” says Lloyd. “We all get to know each other really well and it’s a real pleasure to play with each other.” One of the benefits of being part of a smaller studio is the opportunity to play together regularly in master classes and recitals. The strong bond these students have developed is reflected in their cohesive tone and aided the quartet in winning a top spot in the Concerto Competition last April.

With the concert date finally nearing, the quartet is really getting excited for their upcoming performance of Schumann’s “Konzertstück” with the UVic Orchestra. “One of those dreams that you have when you start in music is the opportunity to play as a soloist in front of an orchestra,” says Malchow. “It will be an honour to play with our peers and colleagues.”

With the introduction of valves on the horn in the early 19th century, Schumann exploited the new technical potential of the instrument such as chromatic lines and figurations, key modulations, and complete scales previously impossible in the low register of the natural (valveless) horn. The horn’s dynamic range and colour are also showcased in this virtuosic work.

Composed in 1849 during Schumann’s most prolific years (1848–49), Schumann’s “Konzertstück” quickly became the pinnacle of horn concerti for contemporary hornists. The piece “really showcases not only the horn as a solo instrument, but also the horn section,” says McNally.

In addition to Schumann’s “Konzertstück,” the UVic Orchestra will also be playing Mendelssohn’s “Symphony No. 4 in A Major ‘Italian'” in their Fall Harmonies concert at 8pm Saturday, Nov 26, in University Centre Farquhar Auditorium. Tickets ($10-$20) are complimentary for UVic students with valid ONECard.

You can hear an excerpt from Schumann’s “Konzertstück” in this short video preview: 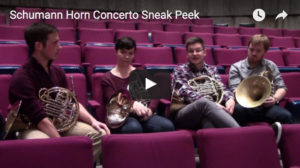