It’s the kind of ovation Mozart himself would have loved: Amadeus, Phoenix Theatre’s final production of their 2014/15 season, has been earning raves from local reviewers—and packing the house with almost every performance. 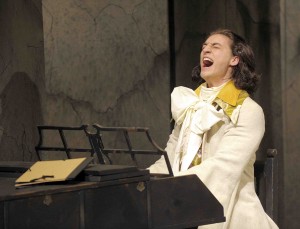 Amadeus continues daily at 8pm to March 21, with a bonus 2pm Saturday matinee on March 21, but tickets have been flying out the door. 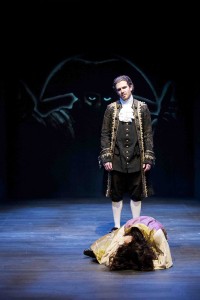 Often considered the greatest musical genius the world has ever known, Wolfgang Amadeus Mozart was also seen as vulgar, boorish, unforgivably brilliant—and thus an enemy to be eliminated—by Antonio Salieri, his 18th-century contemporary and fellow composer. Seen through the envious eyes and skewed memory of the aging Salieri, Amadeus chronicles their tumultuous rivalry and Salieri’s devious efforts to destroy Mozart’s career, even while recognizing the genius of his music.

“Director Chari Arespacochaga . . . has imbued the show with wonderful vitality,” writes Times Colonist theatre critic Adrian Chamberlain in this glowing review, praising Arespacochaga’s re-imagining of the show in an insane asylum as “an intelligent approach that works well.” Chamberlain also notes the strong work by lead performers Jenson Kerr (Salieri), Aidan Correia (Mozart) and Samantha Lynch (Constanze), all of whom ensure “the pathos is evenly leavened with humour and hijinx.” 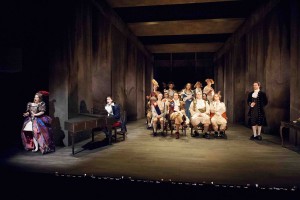 Chamberlain also praises the show’s design elements, noting Theatre professor Allan Stichbury’s “terrific set [that] resembles a giant dungeon—a dark, forced-perspective vault that encourages us to consider the serious themes underneath the comedy” and the “superb costumes” by undergrad student Pauline Stynes—”The costumes are sumptuous, a feast for the eye.”

CBC Radio’s On The Island theatre reviewer Monica Prendergast enjoyed the show, noting that “the production is working well on a number of levels. It has an extremely strong design, a lovely set by Allan Stichbury . . . . beautifully lit by Michael Whitfield who gives us a gorgeous design . . . . and really nice costumes by Pauline Stynes, so the whole thing gets lifted to a whole other level.” She also notes “the ensemble work was particularly strong.” You can listen to the entire review here. 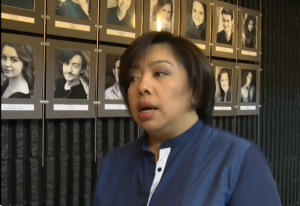 Interestingly, Arespacochaga and Stynes both have well-established professional careers long before they enrolled in the Department of Theatre—Arespacochaga has been directing major Broadway musicals in Manila for the past decade, many of which then toured across Asia or were remounted in Singapore, while Stynes has a 30 years of tailoring and costume creation behind her—a good decision, it turns out, as Stynes won the local  Critics’ Choice Spotlight Award for Best Costume Design for Phoenix’s Picnic in 2014.

You can see director Arespacochaga talk about the play in this preview from CTV Vancouver Island News (around the 4:34 mark), and you can read more about designer Stynes in this preview from the Times Colonnist. And there was this great conversation on the local CFAX1070 Eye on the Arts radio show (starts around 34 minutes) between Arespacochaga and show host (and Fine Arts alumnus) Adam Swatsky, as well as actor Jenson Kerr (Salieri). The Oak Bay News also spoke with Arespacochaga in this article, where she noted the production is “a great interactive mix of students and industry pros. New thoughts colliding with more experienced thoughts. It’s been dynamic.” 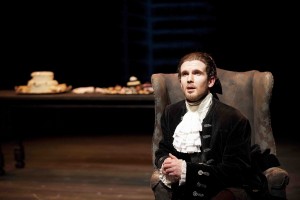 Local arts blogger Janis LaCouvee noted in this review that “director Chari Arespacachoga does not shirk from difficult questions; her Amadeus is a bold and ambitious undertaking which brings essential reflections on the nature of talent, ambition and legacy to the forefront. Under her inspired direction the students of the University of Victoria theatre department have once again delivered superior theatre to the stage, ending the year with a production that is as complex as the men it immortalizes.”

UVic’s student newspaper Martlet also really enjoyed the production, noting in this review that, “The two male leads, Salieri and Mozart, worked brilliantly together, allowing the audience to feel sympathy for both characters.” 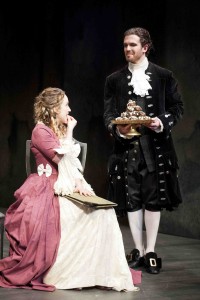 And Monday Magazine was also impressed with the production, with reviewer Laura Lavin primarily highlighting the cast in this blog review—noting that Aidan Correia “does an admirable job of making Mozart both boorish and endearing,” Jensen Kerr plays Salieri with “spirit and confidence” and the “supporting cast was superb.” She also acknowledges that the “music, lighting and staging of this performance were again superb. The set is dark and gives focus to beautiful period costumes by designer Pauline Stynes.”

Finally, if you missed director Arespacochaga’s pre-show lecture, you can listen to it here and hear her in conversation with Theatre professor Peter McGuire discussing the differences between the play and the film, playwright Peter Shaffer and her own creative process.