The tools writing professor Maureen Bradley uses with her students may not immediately leap to mind when most people think about research at UVic. But for Bradley, lights and cameras are very much the focus of the action when it comes to film production.

“Research is the creation of new knowledge,” she says, “and literature, art and film are knowledge. Those images and stories explain to us who we are, and how we function as humans.”

Bradley has been teaching film-based courses at UVic since 2004, but her real success began with the creation of the writing department’s CFI Hi-Def Story Incubator Laboratory in 2009. This film production class allows her to take experiential learning to a whole new level.

Thanks to nearly $350,000 in funding from the Canadian Foundation for Innovation, the BC Knowledge Development Fund and UVic’s Office of Research Services, the Story Lab continues to have great success with their experiential “class as crew” model. 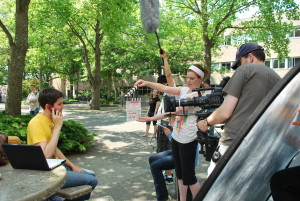 Filming an episode of “Freshman’ Wharf”

Their inaugural effort—Freshman’s Wharf, a light-hearted, 10-episode web series looking at the first-year student experience—won a 2010 Leo Award, presented annually to the best in BC’s film and television industry.

Bradley and her writing students have since gone on to create three other short films: Stuck, How Socrates Bought the Farm and ‘Til Death—the latter of which won a pair of awards at the Vancouver Short Film Festival in November 2013, and will screen at the Victoria Film Festival in February.

With students taking on all the jobs of a film crew, from lighting and continuity to set decoration and film editing, Bradley has created a hands-on course that teaches how film production really works. “It’s just such a fantastic experience,” she says. “They love being on set.”

But while there’s clearly talent aplenty among the 20-odd students who enroll in her class each year, Bradley sees the writing department as the key to their success.

“Film is just a development of writing’s already well-known streams—fiction, poetry, creative non-fiction and drama,” she says. “I don’t know anywhere else in the country where this is happening. There are good student films being made, but they’re not being driven by faculty-led courses.”

Bradley has spent the past four years building up the technical equipment and supporting talent needed to create professional-looking 10-minute short films.

“Drama and film are really applied forms of learning,” she explains. “A screenplay and a play are not final products, and they’re always open to interpretation. Students need to see how hard it is to make a film, how to adjust the writing as the film is made, how to write with a budget in mind.”

With no other Vancouver Island college or university offering film production classes, UVic’s writing department is uniquely situated to help fill a gap locally and nationally.

“I think we have the best student screenwriters in Canada here,” she says. “This is a unique situation where the production comes through the writing first.”

“I’ve seen beautiful films at student screenings across Canada, but the story is usually lacking, so it’s really exciting to see story and surface come together here. Why make a film if there’s no heart to it?”

Learn more about Maureen Bradley’s research in this Faces of UVic Research video.

This article originally appeared as part of UVic’s KnowlEDGE series in the January 26 edition of the Times Colonist.