From Borneo textiles to the world’s largest button blanket, from a 15th century alabaster religious carving to a 19th-century lady’s pocket revolver, from anarchist manifestos to a Jim Carrey movie, the objects studied by art historians continue to change with the times. So too does the study of art history itself, as evidenced by the current Legacy Maltwood exhibit Learning Through Looking, celebrating the 50th anniversary of UVic’s Department of Art History and Visual Studies (AHVS). 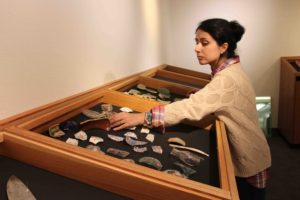 “Introducing people to the importance of art is only part of our job,” explains exhibit co-curator Atri Hatef. “Art history is not just about studying specific examples of art, objects and architecture, it’s also about how and why they were created, and what the similarities are across regions and centuries . . . the product of creation is sometimes less important than the process or intention of creation. It’s not just about the past and history, but also about the present and future.”

Hatef, a PhD candidate with a focus on Islamic medieval urban architecture, is acutely aware of what can happen when past and present collide; she came to UVic from Iran specifically to study with AHVS professor Marcus Milwright.“I’m looking at transcultural exchanges during 13th and 14th century Iran . . . it’s interesting how people from places like China, Cairo and Damascus talk to each other through the language of art and architecture,” she says. But, as recent events have shown, academic pursuits can easily be threatened by politics — both at home and abroad. 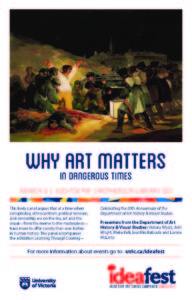 “We’re usually looking at people who lived 700 or 800 years ago, but consider what’s happening in Syria, in Jordan, in many countries around the Middle East: we’re losing the very materials we’re supposed to be working with,” says Hatef, who, as an Iranian, is also affected by the US travel ban. “Seeing monuments destroyed in Aleppo and Palmyra is very painful, and you can see how these things could happen in other places — like Iran, which is under constant threat from the US.”

It’s these kind of headlines that make the Learning Through Looking exhibit an idea part of the AHVS panel discussion “Why Art Matters in Dangerous Times” at UVic’s Ideafest. Featuring AHVS professors Victoria Wyatt, Astri Wright, Melia Belli, Evanthia Baboula and Lianne McLarty, this lively panel will discuss how, at a time when (sadly) xenophobia, ethnocentrism, political tensions and censorship are on the rise, art and the visual — from the meme to the masterpiece — have more to offer society than ever before in human history. All are welcome from 5 – 7pm Wednesday, March 8, in room 025 of the McPherson Library (right next door to the exhibit space). 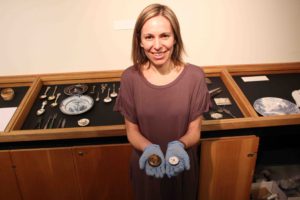 But it’s no coincidence the exhibit is titled Learning Through Looking, says co-curator and Master’s candidate Jaiya Anka. “While the intention of the exhibit is to tell the story of our department and to celebrate the scope of our teaching, we hope the significance of the discipline will emerge through the stories of the objects.”

Indeed, given the vast chronological and geographical range of objects on display, the diverse focus of the AHVS teaching faculty is easy to discern. With cases dedicated to the nine full-time professors — as well as the history of the department itself — the exhibit nicely encompasses their global reach while still maintaining a local focus: the community engagement represented by the button blanket project, say, or the juxtaposition of 19th century objects recovered from Swan Lake with pottery shards from medieval Cairo. 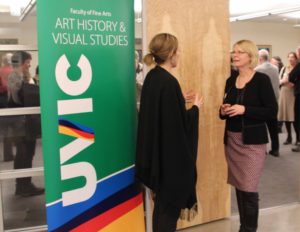 “We were pioneers in the field when we were founded 50 years ago — not just in Canada but across North America,” notes department chair Dr. Erin Campbell of what was then the History in Art program. “At the time, art history was very Western-focused but we were one of the few institutions willing to look at Asian and Indigenous art. And we are still one of the largest world art history departments in Canada.”

You can learn more about the exhibit at the Curators’ Talk with Hatef, Anka, Campbell and AHVS professors Victoria Wyatt and Astri Wright, 1 – 2 p.m. Tuesday, March 14, in the Legacy Maltwood Gallery on the lower level of McPherson Library.

Campbell says the recent addition of “Visual Studies” to the department’s title is indicative of changes to both the world and the program itself, which continues to attract students from nearly every other faculty on campus with its popular range of electives. “As society becomes more and more digital, the importance of visual literacy is obvious: visual studies has grown beyond art and architecture to include everything from fashion and advertising to film, graffiti and digital culture itself. It’s essential to keep up with that.”

Anka hopes the exhibit, which continues until April 30, captures the department’s far-reaching implications. “Art history is a discipline that touches everything and changes the way we look at and understand the world. Each object has a story — it embodies a place, a time and a people, but also economics, chemistry, religion, language . . . . every day I learn something new, and I love that.”