It’s safe to say few students would be proud of being called a scam artist, but Department of Theatre graduate Max Johnson’s pride comes from the spelling. Johnson, who has been working for local professional theatrical company Theatre SKAM since 2011 (whose associates are charmingly dubbed “SKAM artists”), is graduating with a double major in Writing and Theatre. But it’s the practical experience he learned at Phoenix Theatre that has made him such a valued member of SKAM’s team. 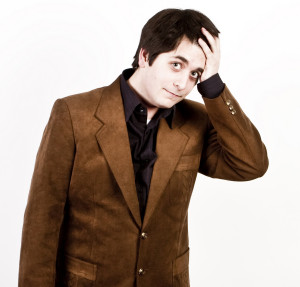 As with many students in the Faculty of Fine Arts, Johnson didn’t wait until graduation to put his experiential learning to work. He was hired into a part-time position as the Administrative and Communications Assistant for Theatre SKAM while only in his second year.

“Theatre is a department where you absolutely get out of it what you put in,” says Johnson. “My entire time at university was spent stepping sideways into things that would lead me places I never expected—which is how I got into marketing and Theatre SKAM in the first place.” 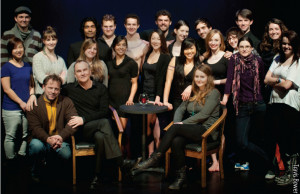 Daniel MacIvor (seated, left) with the cast & director of Inside (photo: Travis Bower)

Even though marketing and communications wasn’t his first choice as a specialization, that’s where he was placed in his second year. “They needed someone with writing experience—and I was part of a group where I needed to solve a lot of crises,” he recalls.

One of those crises? Helping to market Phoenix Theatre’s 2011 production of Inside, a world premiere by Daniel MacIvor, one of Canada’s leading theatre artists. But when Johnson’s communications team of three lost two members due to illness and the Tohoku earthquake (“one of my group was an exchange student from Japan, so she was out of the picture making sure her family was okay”), he soon found himself as a solo act. “It was a crash course on marketing, publicity, photography and media relations,” he says. “It definitely acclimated me to the whole trial-by-fire scenario.” 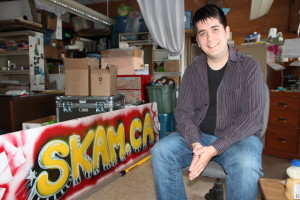 No surprise, then that Theatre SKAM thought Johnson would be a good fit when they found themselves in a similar situation: just as SKAM was beginning to plan a tour of their show Cariboo Buckaroo, a medical crisis and an unexpected resignation left them bust in the dust. “To say Theatre SKAM was desperate for good help would be entirely accurate,” recalls alumnus Matthew Payne, SKAM’s Artistic Producer. Payne contacted Adrienne Holierhoek, Marketing & Communications Manager for the Department of Theatre, who recommended Johnson; as a Phoenix grad, Payne well knew the potential Theatre students had for putting learning into action. “I just wished a tour in Max’s general direction and somehow he pulled it off—a three-week tour in rural B.C. A true SKAM artist was born.”

While it sounds funny now, Johnson recalls it as being anything but. “I had never planned a tour before, but suddenly I was the sole person responsible for finding venues,” he says. “Then while the show was on tour, I was the only person left in the office. But it turned out to be a very harmonious fit—I got the vibe of the company very quickly.” While he started as a tour coordinator, Johnson is now SKAM’s full-time Administrative Assistant, and soon to be Artistic Associate. 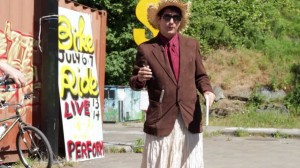 Given the current drumbeat of practical employability, does Johnson ever worry about pursuing a career in the arts? “I took a couple years off after high school to try and come up with something more practical than the arts, but I couldn’t think of anything I wanted to study outside of that,” he admits. “I could have become an electrician, but that’s not where my skills lay.”

Ultimately, says Johnson, studying Theatre at UVic revealed his true passion. “I wanted to better myself, and I’m a better person now for having come here. I understand the need to be practical, but we clearly want to live in a society that values creativity. That needs to be encouraged.”