If it’s Thursday, it must be opening night at a local art gallery—and this week, two Visual Arts alumni each have openings here in Victoria.

First up is Rick Leong, who is opening his first Canadian solo exhibition this week at the Art Gallery of Greater Victoria’s LAB Gallery. The Phenomenology of Dusk is, as Leong himself describes it, “the study of the phenomena that is illuminated by a waning light in the gathering darkness, encouraging the imagination to form the visible from the invisible.”

According to AGGV curator Nicole Stanbridge, “His large-scale paintings create haunting and lush landscapes that hover in the intangible realm of dusk. Influenced by both Chinese and Canadian landscape painting traditions, the themes articulated in Leong’s work begin in the natural world—forests, mountains, meadows and night skies—and become immersive spaces built from imagination and memory. In keeping with Chinese landscape tradition these scenes are more than mere representations of nature. They are at once tangible and ethereal in their articulation of the psychological experience of dusk. The imagery in his work leads us through a poetic narrative that speaks of utopic landscapes; an idealized and constructed view of nature that has been prominent throughout the history of Canadian landscape painting.”

Leong’s The Phenomenology of Dusk is a new series that evolved during a January 2012 artist residency in Barcelona, Spain.  As he told local Times Colonist arts writer Amy Smart in a May 17 article, “As a landscape painter, I’m always looking. It’s part of my language, part of my vocabulary. Wherever I am, I’m paying particular attention to the landscape for those sorts of opportunities to expand my vocabulary and inject something new into my language.”

Leong received his BFA from UVic back in 2003, yet despite this being his first Canadian solo exhibition, he earned national attention as one of the finalists in the 2008 RBC Canadian Painting Competition, and his work is already in the collection of the National Gallery of Canada. Leong will also give an artist’s talk at the opening, from 7:30-9:00pm on Thursday, May 17. The exhibit itself runs to August 6.

Next up is 2011 MFA grad and local artist Emilio Portal, whose new installation islands opened at Open Space on May 14. 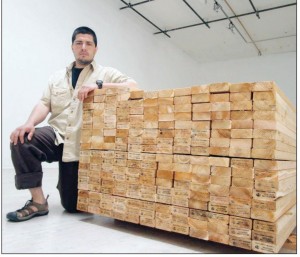 Emilio Portal with the start of his “islands” at Open Space (Photo: Adrian Lam, Times Colonist)

As Open Space’s exhibit description notes, “Inspired by colonial and indigenous histories connected to the site of Victoria, islands is an on-going performance that honours the Lekwungen peoples of Vancouver Island. Through a series of creative acts, Portal performs a respect to the land, and the remnants of history that lies underneath. As this performance unfolds we become witnesses to the creation of an interstitial space of transformation and ceremony. Portal’s islands float into existence to become a new ground, a new ground on which we can respond to the land in deep and meaningful ways.”

In a Times Colonist preview article titled “More to Pile of Wood than Meets the Eye” (also by busy arts reporter Amy Smart), Portal posed with a stack of 204 milled cedar planks, explaining, “This pile of wood was everything to the people here. It built their houses, the boats, the clothing, the nets for fishing . . . . This cedar needs to be revered, even honoured for its service to humanity, to the world.”

Local arts journalist Kate Cino has done a feature on Portal’s exhibit on her Art Openings website. And given the evolving nature of the exhibit, Portal will be having a “show closing” celebration instead of a formal opening, running from 7-9:00pm on June 26.