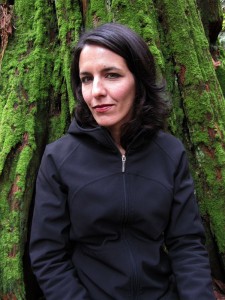 Noted Canadian author Charlotte Gill—currently in the running for the $25,000 Charles Taylor Prize for Literary Non-Fiction (alongside Writing’s own Madeline Sonik)—will be appearing at UVic for a special reading and book signing event this week.

Gill, whose tree-planting memoir Eating Dirt: Deep Forests, Big Timber and Life with the Tree-planting Tribe earned her the Taylor Prize nomination, will be reading from 1-2pm on Tuesday, February 7, in room B111 of the Cornett Building. She will also be doing a reading alongside UVic grad  Barbara Stewart, author of the oil-patch camp memoir Campie author at 7pm Tuesday at Cabin 12 restaurant, 607 Pandora. (Be sure to check out the original “Eating Dirt” essay from Vancouver Review that grew into Gill’s highly acclaimed memoir.)

Eating Dirt was also nominated for the Hilary Weston Writers’ Trust Prize and the B.C. National Award for Canadian Non-Fiction. A former professional tree planter herself, the Sunshine Coast-based author’s previous book, Ladykiller, was a finalist for the Governor General’s Literary Award and winner of the B.C. Book Prize for fiction. Her work has appeared in Best Canadian Stories, The Journey Prize Stories, and many magazines.

“I sowed my first seedling when I got a job on a reforestation crew in northern Ontario,” Gill recalls. “I was 19 years old and an undergraduate at the University of Toronto. Before tree planting, I didn’t know anything about hard physical labour. I arrived in a remote and snowy camp in the boreal forest with half the necessary camping gear and all the wrong clothes. But I was instantly hooked on the tree-planting life—a job most of us grow to love and hate in equal measure.

“Since those early days, I’ve worked on the Canadian Shield, in the foothills of the Albertan Rockies and in many parts of British Columbia, including the breathtakingly primeval Great Bear Rainforest. Like thousands of planters all over Canada, I’ve left my handiwork in muddy swamps and on high mountaintops, in sandy loam and rocky barrens. I’ve commuted to work in float planes, offshore tugboats, diesel trucks, helicopters, rowboats, ATVs, inflatable dinghies and amphibious military vehicles. I’ve crossed paths with whales, eagles, dolphins, flocks of migrating cranes, moose, newborn fawns and grizzlies. In my silvicultural travels, I met all kinds of weird, brilliant, fascinating people. They’re still some of my closest friends.

“In 17 seasons I planted more than a million trees. I don’t do it for a living any more, but for some strange reason it took me a whole book to explain, I miss it every day.”