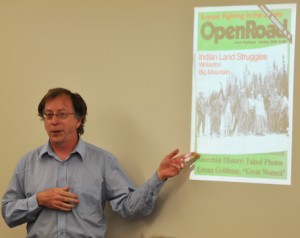 The past few months have been anarchy for History in Art prof Allan Antliff . . . of course, that’s nothing new. As specialist in anarchist studies—as well as his continuing role as the Canada Research Chair in Modern and Contemporary Art (2003-2013)—Antliff is the department’s go-to guy for all things about anarchy and art.

Back in September, Antliff helped launch the digital collection of UVic Libraries’ unparalleled Anarchist Archive, of which he is the director. Since 2005, the Anarchist Archive has been amassing all manner of material relating to the anarchist movement (including journals, posters, recordings, monographs and more), with a special focus on Canada—and which now include the recent acquisition of the personal papers of activist and author Ann Hansen (a former member of Canadian urban guerilla group Direct Action), who attended the event. Now that they’re available online, the Anarchist Archives can be of greater benefit to scholars and activists around the world. 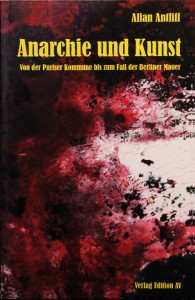 Now, a revised and expanded edition of Antliff’s ground-breaking study, Anarchy and Art (2007), has just been published in German by Verlag Edition AV.  “The book begins with artist Gustave Courbet’s activism during the 1871 Paris Commune, and ends with an examination of anarchist art during the fall of the Soviet empire,” explains Antliff. “Other subjects include the Neo-Impressionists and their depictions of the homeless in the 1890s; the Dada movement in New York City during World War I; the decline of the
Russian Avant-Garde during the 1920s and 30s; the West Coast Beats of the 1940s and 50s; feminism and modernism in the 1960s; and the anti-colonial
aesthetics of Indian art critic Ananda Coomaraswamy.”

Since beginning his UVic appointment as Canada Research Chair back in 2003, Antliff has taught courses on activism and art, anarchist aesthetics, Russian Constructivism, New York Dada and a host of other subjects dealing with modernism and contemporary art. He has authored two books and is editor of Only a Beginning, an anthology of the anarchist movement in Canada, and is also art editor for the interdisciplinary journals Anarchist Studies and Anarchist Developments in Cultural Studies, and visual arts editor for the Routledge Encyclopedia of Modernism. Active as a theorist and historian of anarchism, Antliff has written on a wide range of topics including radical pedagogy; post-structuralism; and aesthetics.

In his role as art critic, Antliff has published numerous art reviews and feature articles in journals such as Canadian Art magazine, Fuse, C Magazine and Galleries West. He has also contributed to exhibition catalogs for the Whitney Museum of Art, the Vancouver Art Gallery, and other institutions. Allan has produced two feature programs for CBC Radio (Guernica: A Political Odyssey, 2007; Anarchy, Art and Activism, 2002). 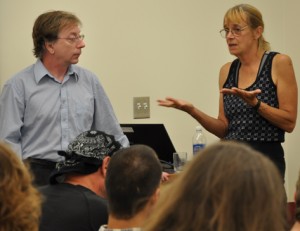 Antliff with Ann Hansen at the Anarchist Archive digital lauch

Active in the North American anarchist movement since the 1980s, Antliff was a founding member of the Toronto Anarchist Free School (now Anarchist U) and contributor to The Fifth Estate, Anarchy Magazine, Ye Drunken Sailor and other publications. Before entering academia in 1999 he worked as news and issues editor at the collectively owned biweekly newspaper, Between the Lines. Currently, he is a member of the Victoria Anarchist Reading Circle, the Victoria Anarchist Bookfair Collective and the Black Raven publishing collective.