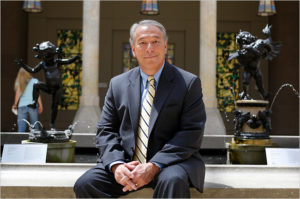 “We did an undercover operation in Copenhagen in Denmark, where we recovered the most valuable piece—it was a [1630] Rembrandt self-portrait stolen in the armed robbery, valued at $35 million,” Wittman told the local Times Colonist in this September 29 article. Calling it “a very well-thought-out crime,” Wittman says the thieves also nabbed a pair of Renoir paintings before zooming off in a speedboat—that’s when Swedish authorities called in the FBI art-crimes unit.

Going undercover, Wittman was able to set up a buy and meet the thieves in a Copenhagen hotel room with $250,000 US, which he traded for the Rembrandt. Once he had the famous painting in hand, Wittman signalled a Danish SWAT team to move in.

“It’s always dangerous,” he says. “You’re dealing with people who are criminals. They’re doing criminal enterprises: armed robberies, bank robberies. They’re stealing cars, they’re selling drugs and weapons. And they happen to do art theft, too . . . . What I always say is, they’re better criminals than they are businessmen.”

Listen to more of his riveting stories on this Sept 30 interview with CFAX radio (skip ahead to the 11:34am mark).

Dubbed “the most famous art detective in the world” by The London Times, Wittman is a former FBI special agent who has recovered millions of dollars worth of stolen art and cultural property during his 20-year career — including paintings by Rembrandt, Goya, Norman Rockwell, and one of the original 14 copies of the U.S. Bill of Rights. He was instrumental in the creation of the FBI’s rapid deployment Art Crime Team, and has since instructed international police and museums in investigation, recovery and security techniques. 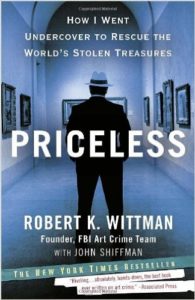 Now the New York Times bestselling author of Priceless: How I Went Undercover to Rescue the World’s Stolen Treasures, Wittman will deliver a free public lecture at 7pm Tuesday, October 4, in Room B150 of the Bob Wright Centre. He will be speaking about his career and signing both Priceless and his latest book, The Devil’s Diary: Alfred Rosenberg and the Stolen Secrets of the Third Reich. His lecture, “Saving $300 Million in Art and Antiquities: True Tales from the FBI’s Real Indiana Jones,” will also feature art history & visual studies alumna Alison Ross, the owner, appraiser and auctioneer at Kilshaw’s.

Wittman’s appearance on campus is part of the 50th anniversary celebrations for the Department of Art History & Visual Studies. For 50 years now, AHVS (formerly named the History in Art department) has been researching, teaching and championing the importance of visual culture in society. From art forms both ancient and modern, the role of art history has only become more important as we shift to an increasingly visually based world.

“Robert Wittman is the ideal choice for our 50th anniversary event,” says department chair Dr. Erin Campbell. “He demonstrates the impact art history can have on the world, and his participation in two of our classes during his visit is typical of the kind of exciting, expert-based, hands-on learning that happens in AHVS.”

In addition to his lecture, Wittman will also spend a number of days on campus, where he will engage with AHVS students — notably in the new elective Art Crimes: Fakes, Forgeries and Fraud with Dr. Carolyn Butler-Palmer.

Don’t miss this chance to hear from the “FBI’s Real Indiana Jones” in what’s guaranteed to be a fantastic event!