The reviews are in for Phoenix Theatre‘s latest production, the Tony Award-nominated black comedy Reasons to Be Pretty, and the local critics are holding their thumbs way up for this one. 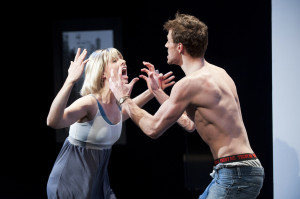 Reese Nielsen and Robin Gadsby pull out the stops in Reasons to Be Pretty (photo: David Lowes)

“UVic’s theatre department has done a terrific job with this black comedy, which boasts an unusually strong student cast and crisp, stylish direction from Christine Willes,” raves Adrian Chamberlain in his Times Colonist review. “Reasons to Be Pretty is bound to be one of the season’s highlights.”

Meanwhile, in her CVV Magazine review, critic Erin Anderson describes Pretty as “a strong show—the best I’ve seen from Phoenix yet—and a thought-provoking, empowering one at that.” She felt that “all of the elements of theatre come together exceptionally well in this production, so much so that it’s a shame it has such a short run.”

Busy local arts blogger Janis LaCouvee calls it a “naturalistic, sprawling juggernaut of a tale” in her review, describing it as a “slice-of-life for the 21st century that speaks to the heart of many young people today, and confronts us all with our own attitudes.” And Kelly J. Clark of The Marble online theatre blog says Reasons to Be Pretty features “a talented cast and crew, who elevate it to a production of merit.” 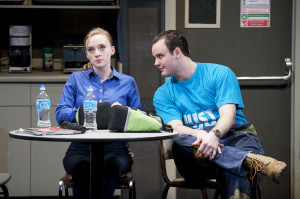 Praising the performances (“All the actors are strong—all obviously have careers ahead of them if they so choose”), the TC’s Chamberlain puts the spotlight on student actor Reese Neilsen as Steph, calling her “a standout” who captures a “complex, contradictory character with great heart and verve.”

CVV’s Anderson also highlighted the cast, noting Neilsen “gives an affecting, sharp performance as Steph, balancing intense emotion with intelligent convictions” and felt Alberta Holden did “great work in her monologue on the unnerving, alienating nature of beauty and brings a light playfulness to the role even when [her character] Carly is on the warpath.” She also noted how director Willes delivers “an honest and lifelike portrayal of average people who manage to capture something very profound.”

The Marble‘s Clark noted the show is “graced with a talented cast”, and credits director Willes “who coaxes wonderful performances from her cast and her fantastic crew” and creates an overall “slick production.”

Interest was also high in advance of the show’s opening, with local online arts mag CVV Magazine doing this video interview with Reasons to Be Pretty director Willes. The Times Colonist also spoke with Willes in this preview article, noting she had previously worked as an actor with Pretty playwright Neil LaBute when he was filming the horror film The Wicker Man in Vancouver a few years back. Willes is also interviewed on this U in the Ring radio interview from CFUV; the interview starts about halfway through the podcast.

Reasons to Be Pretty runs 8pm nightly through to February 23, with a 2pm matinee on Saturday, February 23. Showtimes and ticket prices can be found here.