Aysia Law, a second-year UVic Writing student, has been named the City of Victoria’s Youth Poet Laureate—a first not only for Victoria, but for Canada itself.

“I think it’s an amazing opportunity for a youth in the community, like me or future ones, to have some power in the community in shaping the vision of their own city,” Law told local Times Colonist reporter Amy Smart in this recent article. 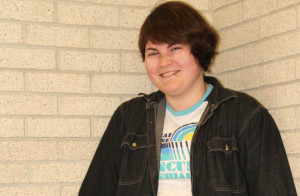 The Youth Poet Laureate will receive a $1,500 honorarium, $1,000 of project funding and a year-long mentorship during the term (January to December 2013) with Victoria’s 2012 Poetry Slam Champion, Jeremy Loveday, administered through the City of Victoria Youth Council.  “I knew there’d be great interest, because we have an amazing youth poetry community in Victoria,” says Loveday, who also runs the Youth Outreach Program for the Victoria Poetry Project.

Loveday says there were 32 applicants, which was narrowed down to six finalists—including one other UVic Writing student—with the final judging based on what he describes as someone with “a full package.” “We needed someone with quality poetry and great creative ideas, but also a presence and the skills and experience to make that project come to life,” says Loveday. “Basically, Aysia was that person.” 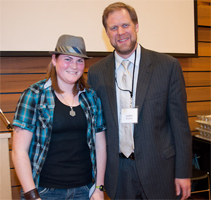 Law admits she entered “on a bit of a whim” after hearing about the call for entries from her poetry professor, Carla Funk (who, coincidentally, was Victoria’s inaugural Poet Laureate). But there’s nothing whimsical about her talent, as Law earned first place in the fiction category of UVic’s Diversity Writing Contest in 2012, and has been performing at local spoken word events since moving here from Vancouver in 2011. She also volunteers with South Island Pride Youth and organizes Queer Quills, a writing group for queer, transgendered/transsexual and allied youth that meets weekly at downtown’s Solstice Café.

Her major project will be a poetry flash mob during National Poetry Month in April, and she will appear alongside Victoria’s current Poet Laureate, Janet Rogers, at various city events throughout the year. But Law is also interested in organizing other events, including one that’s close to her heart: a diversity slam.

“It would be a springboard for an open forum discussion about what our community needs,” Law explains. “The problem now is that we have more experienced poets coming to slams and spoken word nights—they are wonderful and have really good insights, but they’re not everyone we need to hear from. I’m hoping to bring in more youth and marginalized categories of people to come and speak about what they see; it would be a more inclusive event than the poetry slams I’ve seen so far. We need to bring more people in, make it more accessible, have more voices represented.”

One of Law’s other Writing professors, Lee Henderson, helped her prepare for the competition. “I jumped out of my socks and shoes when Aysia called to tell me she had been chosen as Victoria and Canada’s first Youth Poet Laureate,” says Henderson. “She’s such a passionate and dedicated writer with a great sense of humour and a natural instinct for language. She is the perfect choice as our first public voice for the city’s young poets. I know she’s going to make sure to include as many people in this experience as possible
. . . . This is great news for the local literary scene and the first year of a great new legacy.”

Law will perform the first poem of her new position to Victoria City Council at City Hall on January 17 with Janet Rogers. “She’ll read a poem, I’ll read a poem, then we split.” She pauses and gives a nervous laugh. “Okay, I’m a little scared.”

There’s also this piece on Aysia from Vancouver’s Metro Times. And this piece from UVic’s Martlet.

You can also click here to see Law perform a piece at a local slam back in October 2012.