History in Art in the news

One notable aspect of UVic’s 50th Anniversary celebrations that’s getting some attention this month is the University Art Collection. With the exhibit The Collections at 50: Building the University of Victoria Art Collections running through to November 24 at the downtown Legacy Art Gallery, guest curator, former Maltwood Art Gallery director and retired History in Art professor Martin Segger hosted an illustrated talk on Wednesday, October 17 at the Legacy. 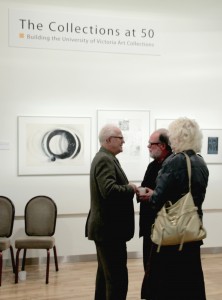 Current Collections curator Caroline Riedel was quoted in a recent Saanich News article about the exhibit. “One of the biggest challenges in representing 50 years of collecting was paring down the list to fit in the gallery,” Riedel says in the piece. “What began as a small group of works by Canadian and European artists has blossomed into a rich and varied teaching and research resource, thanks mainly to the generosity of individual donors.”

With approximately 27,000 pieces collected over more than 50 years, Collections at 50 includes a spectacular array of artwork and artifacts—from First Nations masks by Henry Hunt to works by Emily Carr, William Morris, Lawren Harris and Eric Metcalfe—to trace the development of the collection in tandem with the development of academic programs and research interests at the university.

Collections at 50 runs to November 24 at Legacy, and the gallery is open Wednesday through Saturday, 10 am to 4 pm. 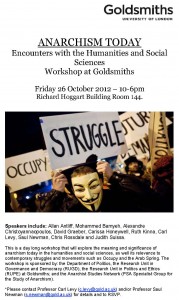 In other History in Art news, professor Allan Antliff has been invited to London, England for some speaking engagements. He’ll be at the University of London’s Goldsmiths College on October 26 as part of an “Anarchism Today” workshop, alongside the likes of Mohammed Bamyeh, Alexandre Christoyannaopoulos, David Graeber, Carissa Honeywell, Ruth Kinna, Carl Levy, Saul Newman, Chris Rossdale and Judith Suissa. The day-long workshop will explore the meaning and significance of anarchism today in the humanities and social sciences, as well its relevance to contemporary struggles and movements such as Occupy and the Arab Spring.

While on the far side of the Atlantic, Antliff will also be speaking to the Anarchism Research Group at Loughborough University, near Leeds, on October 31. The topic of that seminar is “Pacifist-Anarchism and the Arts”, and he’ll be joined by Kenneth Patchen, Jackson MacLow, John Cage and Donald Judd.

Antliff was also quoted in the Victoria News recently about Camas Books, of which he was a founding member—not that he’s let that go to his head. “I do a lot of grunt work,” Antliff told Black Press reporter Edward Hill. “I mop the floor and clean up. I leave the leadership to others. There are very talented people in the collective. I’m interested in art and social change. For me, it’s a good fit.” 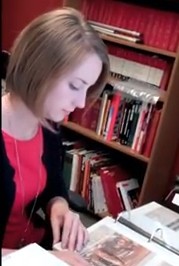 Emerald at work in the Firefighters Museum

Meanwhile, in student news, History in Art Co-op student Emerald Johnstone-Bedell entered this video of her experience working at the Firefighters Museum of Calgary in the annual Co-operative Education and Career Services video contest. It’s an interesting look at how you can find history in art in just about any topic.

Finally, History in Art alumna Dianne Carr made the news recently in her role as guest curator at the Art Gallery of Greater Victoria’s exhibit Back to the Land: Ceramics from Vancouver Island and the Gulf Islands. Both the local Times Colonist and Focus Magazine wrote articles about Carr, who once owned the local studio The Potter’s Wheel and was the founding director of Vancouver’s Cartwright Street Gallery which became the Canadian Craft Museum. 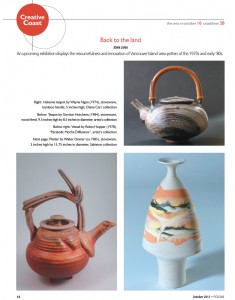 “There was a terrific growth in ceramic practice,” Carr told the TC. “And there’s been no history written about it . . . . People were looking for a simpler way of life and they were starting to do things like grow gardens and can—it was all about sustainability. And so along with those things went a resurgence in the crafts. People wanted to work with their hands and people wanted the products of people working with their hands.”

Local visual art writer John Luna interviewed Carr for the Focus article. “The pots exhibited here represent a short period in which there was a remarkable explosion of ceramics activity on Vancouver Island and the Gulf Islands,” she says in that piece. “It was a brief era in which the modernist and Anglo-Asian influences that prevailed were beginning to give  way to the contemporary post-modern influences that would revitalize ceramic practice in this region.”