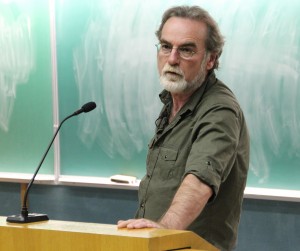 Terry Glavin at his October 19 lecture

Last year, an inspiring talk about the power of stories drew a standing ovation; this year, a passionate diatribe about Afghanistan saw people walking out. Such is the constantly shifting nature of the Department of Writing’s Harvey S. Southam Lecture in Journalism and Nonfiction, a position that always reflects the person who holds it.

While past Southam speakers (Richard Wagamese, Jodi Patterson, Sandra Martin, Charles J. Campbell) all engaged their audiences, none has enraged them quite like this year’s lecturer, Terry Glavin. Given Glavin’s topic, however, and the controversial nature of his latest book, Come From The Shadows: The Long and Lonely Struggle for Peace in Afghanistan (Douglas & McIntyre), it’s no surprise he ruffled a few feathers. “This book is going to sting,” Glavin stated bluntly at his UVic reading on Oct. 19. “It’s not what I want to hear; it’s not what my friends want to hear. You’re not going to like what it has to say.”

The author of six books, Glavin has been a reporter and columnist for a number of media outlets and has won the Lieutenant-Governor’s Award for Literary Excellence in BC. (Indeed, former Lieutenant Governor Iona Campagnolo was among the hundred or so people in attendance at Glavin’s lecture.) But it was the reality gap between his experiences in Afghanistan and the jarringly different media coverage that was the evening’s focus. “Those are the stories I’ve always been drawn to,” Glavin told the audience, “the stories where a vast gulf exists between an imaginary country and a country that exists in the real world.” 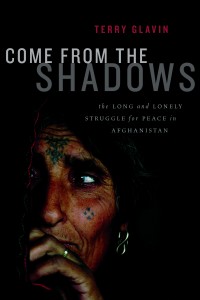 By way of illustration, he offered this simile for the standard Canadian media approach of having a handful of embedded reporters on assignment over the past decade and how it has shaped our view of Afghanistan: “It’s like having a couple of reporters ride around in the back of a police car in the worst part of Detroit for a decade, and that’s all you know about the United States.”

Given his repeated overseas visits and the research that went into his latest book, as well as his role as co-founder of the Canada-Afghanistan Solidarity Committee, Glavin’s seemingly encyclopedic knowledge of Afghanistan often went over the audience’s head—or was the source of their ire. (“This is a pack of lies,” shouted one man. “You’re just toeing the CIA line!”)

But Glavin freely admitted to being “a partisan in this struggle,” noting that, like the majority of Afghans, he supports an extended troop mission to aid in the rebuilding effort, the push towards a more secular society, a greater concern for women’s rights and an increase in education for all. “In Afghanistan, teaching a six-year-old girl to write her own name is a revolutionary act.” And, of course, he decries the hard-right Taliban minority that continues to influence our general perception of the country.  “The course of events over there has been as shaped by our views on Afghanistan as by all the money and bullets we’ve sent over.”

While he is an intelligent and compelling speaker, Glavin’s obvious passion often resulted in a somewhat disjointed delivery; over the course of 90 minutes, he talked not only about Afghanistan but also about his own evolution as a journalist, George Orwell’s media legacy, recent changes to the NDP’s political stance and the current Occupy Wall Street movement (“something may be dying, but something is also being born”). Another point of controversy was Glavin’s reluctance to answer certain audience questions, some of which he dismissed out of hand.

Ultimately, however, his message was clear: get informed, formulate your own opinions, and don’t rely on one media outlet to tell you the whole story—not because it’s a conspiracy, but because they are restricted by financial limitations, political persuasion and lack of general interest.

“People are tired of the symbolic, the play-acting . . . they want change, they want the real,” Glavin said in conclusion. “Check your head, do what you can and you’ll sleep the sleep of the just.”

UPDATE: Brandon Rosario of UVic’s Martlet offered this report of Glavin’s October 19 lecture, noting that while he “stirred up some controversy”, what Glavin reports in his book “is not hateful, anti-Western spite perpetuated by 10 years of war and civilian casualties, but a sense of tentative optimism—a better-than-before place where the people are beginning to find solace in an environment of peace brought by foreign soldiers. The misconception of Western audiences toward Afghanistan—built up from years of increasing political unpopularity on the home front—is irresponsible and dangerous.”

Rosario quotes Glavin as saying, “I don’t want to present myself as some brave person. If you’re embedded with the people it doesn’t require much bravery. I could have interviewed [the Taliban] anytime I wanted . . . but that’s something I won’t do, I confess, I am a partisan. If I had the opportunity I’d call in the fucking drones, make no apologies for it.”