It’s summer, which means the majority of our Fine Arts faculty have broken free of the classroom and are now engaging on their own creative research or practice. As always, here’s a quick roundup of what various faculty members are getting up to this summer. 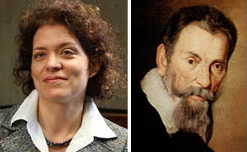 Come August, new School of Music director Susan Lewis Hammond will be researching Claudio Monteverdi and music of the baroque period at the University of Toronto. Her travel is funded by a SSHRC Insight Grant and the results will appear in two forthcoming books from Routledge Press: Claudio Monteverdi: A Research and Information Guide and Music of the Baroque: History, Culture, Performance.

Over in History in Art, the husband-and-wife research team of Marcus Milwright and Eva Baboula will be tackling the last phase of their SSHRC-funded fieldwork in Greece, continuing their search for Ottoman-period buildings and hydraulic engineering in the Peloponnese. Milwright also plans to spend some time in the Linden Museum in Stuttgart working on the Egyptian puppets in their collection. However, his main task for the summer—and forthcoming study leave—will be to complete a book on the seventh-century mosaic inscriptions in the Dome of the Rock in Jerusalem. 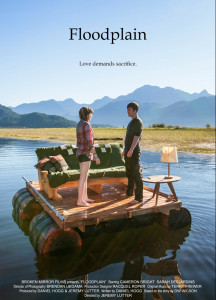 Busy digital media technician and filmmaker Dan Hogg is heading off to the Cannes Film Festival in May with his new short film Floodplain—and you can watch the trailer here. Created in association with equally busy filmmaker, Writing grad and returning Cannes guest Jeremy Lutter (whose Joanna Makes A Friend was at Cannes last year) and based on a story by Writing grad and current Can-lit star D.W. Wilson, Floodplain has been invited by Telefilm Canada as part of their annual Not Short on Talent short film program. Check out this short interview with Hogg, written by fellow Writing grad Will Johnson on his dandy Literary Goon blog. Floodplain stars Victoria-based actor Cameron Bright (Twilight, X-Men 3) and Sarah Desjardins. But as if that’s not enough, Hogg is also currently writing Rip My Heart Out, a tongue-in-cheek creature feature for Movie Central.

Writing professor David Leach will be working “with six or so students” to produce issue #2 of their well-received Concrete Garden urban agriculture magazine—which will also feature a bigger print run—and will shortly be launching the Campus Confidential anthology. And, muse willing, he’ll be finishing up his second book, which currently has three working titles: Look Back to Galilee, The Shouting Fence, or Who Killed the Kibbutz? On the international front, Leach will also be giving a paper and workshop on sustainable suburban design at the International Communal Studies Association conference being held at the spectacular Findhorn Ecovillage in northern Scotland. (Keep a sharp eye open for the fairies!) 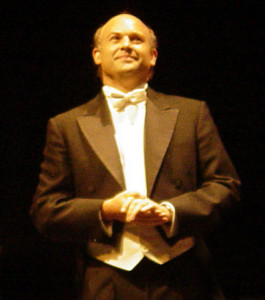 The always busy performer and head of Voice for the School of Music, Benjamin Butterfield, has a full lineup of international activities this summer, including performing at the Aldeburgh Connection as part of Toronto’s Britten Festival, singing with the Bach Choir of Bethlehem at the Bach Festival in Bethlehem, Pennsylvania, participating at the local Friends of Mengo Hospital Africa Benefit in May, and appearing with the American Classical Orchestra at New York City’s Lincoln Center for a concert of Mozart and Rossini Arias/ Duets. Butterfield will also be part of the Summer Vocal Programs faculty at the Opera on the Avalon in Newfoundland, Opera Nuova in Edmonton, the Vancouver International Song Institute and the Amalfi Coast Music Festival in Italy.

Music instructor Anita Bonkowski will be on tour performing in Western Europe throughout June, before she returns in July to teach her summer film music course Let’s Go To the Movies. She’ll also be performing at both Butchart Gardens (July 13 and August 7) and Filberg Festival in Comox (August long weekend). All this in addition to her regular weekly gigs and more summer performances with various groups and ensembles. 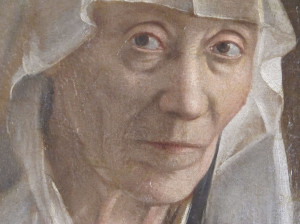 History in Art professor Erin Campbell is also currently on study leave, finishing up her book on “Old Women and Art in the Early Modern Italian Domestic Interior.” (There is absolutely no truth to the rumour we just started that Meryl Streep will be starring in the book’s film adaptation.) She’ll also be heading to Bologna, Italy, for a few weeks in June to do some research and reconnect with the art. Send us a postcard!

Theatre instructor Leslie Bland is finishing the editing of his all-female comedy series She Kills Me for the Aboriginal Peoples Television Network, and is in the process of putting together the financing for his feature-length documentary Gone South: How Canada Invented Hollywood, created in association with writer Ian Ferguson. Also on Bland’s summer to-do list is attending the Banff World Media Festival, the Oregon Shakespeare Festival, and working a number of writing projects.

Busy new Writing professor Kevin Kerr is heading into a new production with his always groundbreaking Vancouver-based theatre company, Electric Company. The new piece is called You Are Very Star and it’s being staged at Vancouver’s HR MacMillan Space Centre & Planetarium. “We’re billing it as a transmedia event that plays with the boundaries of where theatre begins,” explains Kerr, who conceived the project and is co-writing it. “Participants start their journey with the piece prior to performance in an online encounter. The play then continues through public and private exchanges with the audience through social media, and in performance the two-act structure takes the audience on a bit of time travel—back to 1968 and ahead to 2048—and in the middle invites them on a narrative scavenger hunt inside the space centre building.” If you’re in Vancouver, You Are Very Star June 12 – 29. Also stay tuned for a production of Kerr’s Governor-General’s Award-winning play Unity (1918) at Phoenix Theatre next season, which he will be directing himself.

In addition to helping her Writing 420 filmmaking class crowdsource the funds they need to complete their current project, ‘Til Death—directed by Connor Gaston—Writing professor and busy filmmaker Maureen Bradley will be making her own feature film. Bradley was recently announced as one of four winning teams for the National Screen Institute’s Features First initiative, and her project will be going in front of the camera this summer. Stay tuned for details! 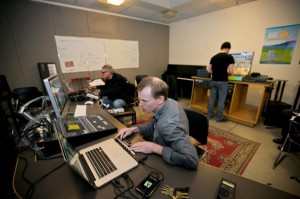 School of Music audio specialist and recording engineer Kirk McNally will be recording a CD project with adjunct faculty member Colin Tilney on harpsichord this summer. “This will be the fourth project that Colin and myself have collaborated on,” says McNally, who has previously recorded Preludes and Dances for a French Harpsichord, Fugue: Bach and his Forerunners, J.S. Bach: The French Suites and Froberger 1649. “I’m also working with Dave Broome and a student from the joint major program in music and computer science to realize an online ‘library’ of the school’s concert recordings—similar to the DIDO slide library. It will be a secure, streamable presence for the School’s recordings on the webpage.” (This project is a follow-up to the Fall 2012 class Special Studies: Project in Digital Media Storage & Dissemination.) 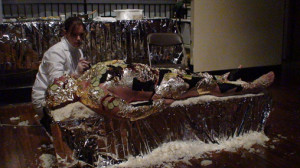 John Boehme really likes to put himself into his art

Visual Arts instructor John G. Boehme is off to Australia to attend and fully participate in exist-ence 5: international festival and symposia—a celebration of live art, performance art and action art. Boehme will be premiering work alongside international artists Henrik Hedinge (Sweden), Labanna Babalon (USA), Peter Baren (Holland) and Sari Kivinen (Finland), and Australian artists Julie Vulcan, James Cunningham, Jade Boyd, Dracopede and Onnie Art. From June 17 to 30, he’ll be at exist-ence in Brisbaine, followed by July dates in Lismore (New South Wales) plus Melbourne’s A is for Atlas festival and Sydney’s PACT Centre for Emerging Artists. exist-ence fosters global education and appreciation for performance art. “We at EXIST hope that this undertaking creates a meeting place where artists, audiences and communities can engage openly,” say the organizers, “a space where one can pause, ask, discover, surrender.”

The latest play by Department of Theatre’s Jennifer Wise is being given a reading in Toronto as part of the new-play fest In The Beginning: A Jewish Playwriting Festival at the Toronto Centre for the Arts. Wise’s story of Ray Frank, titled The Girl Rabbi of the Golden West, recently had a public workshop presentation here in Victoria as part of the 150th anniversary celebrations of Congregation Emanu-El—the very place where Frank actually officiated at High Holiday services in the synagogue’s sanctuary in 1895. 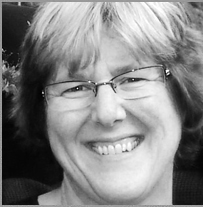 Finally, Department of Writing instructor Vivian Smith has just returned from Ontario’s Western University, where she gave MA students in journalism a presentation on her PhD dissertation. Completed at UVic, the Interdisciplinary Studies dissertation is called All the Resistance That’s Fit To Print: Canadian Women Print Journalists Narrate Their Careers. Smith interviewed more than 25 women journalists in newspapers across the country to explore their reasons for loving—and very often leaving—their newsroom positions. Smith will be part of a panel on gender studies at Congress 2013 in early June here at UVic, and officially graduates June 13. She’ll spend the summer working on a manuscript for a scholarly book on her dissertation, as well as writing and editing for a new Victoria-based consulting company, Santé Communications Group. A few weeks of cruising around the local waters in the “Ruthie B” might produce a few travel articles, or at least reduce the pile of books waiting to be read!