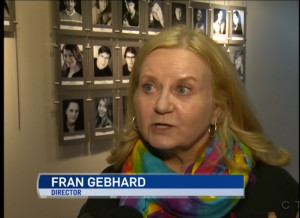 Media coverage of Phoenix’s new production of A Midsummer Night’s Dream has been brisk, with both previews and reviews praising director and Department of Theatre professor Fran Gebhard‘s 1970s revamp of Shakespeare’s much-loved romantic comedy fantasy.

Gebhard talks about her New York experiences that influenced her revisioning of the play in this Times Colonist preview article. She also spoke with the Oak Bay News, explaining that, “We’ve all seen traditional productions of it. I just started listening to the music of the ’70s [and] the idea that rather than being fairies, I would think of those gals as sisters in a white which coven.”

Gebhard also has a conversation with Fine Arts alumnus and CTV Vancouver Island A&E mainstay Adam Sawatsky in this video, talking about the various music themes for each group of characters in the play. (Starts at the 3:00 mark.)

And, based on the reviews so far, it looks like Gebhard has mounted another strong production to follow up her award-winning 2013 staging of You’re A Good Man, Charlie Brown. 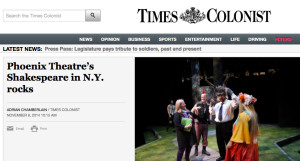 “Shakespeare in NY rocks!” exclaims this Times Colonist review, which goes on to describe the play as “an energetic, music-stuffed romp . . . smartly directed by Fran Gebhard . . . in this show, music—mostly rock, jazz and pop—is almost a character unto itself . . . used cleverly to accentuate characters and themes rather than serving as aural wallpaper.”

Monica Prendergast of CBC Radio’s On The Island also offered this enthusiastic review, noting that it would make a great introduction to Shakespeare for young audiences. And in this review local arts blogger Janis Lacouvee said, “Once again the University of Victoria theatre department spares no effort in bringing an extraordinary spectacle to the stage . . . you won’t go wrong with this production.” 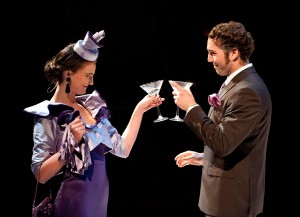 The Marble Theatre Review declares Gebard’s Dream to be “the best play I’ve seen come out of the Phoenix in a decade . . . the choice to set the play in 1978 New York City amidst the contrasting bands of Oberon’s punks and Titania’s hippies was a conceit so beautiful that I refused to believe it could work. Until it did, over and over, until the applause was done.”

Camosun College’s Nexus newspaper came out saying, “The Bard would be proud” and declaring Dream a “big win . . . [which] should appeal to Shakespeare novices and stalwarts alike. Strong performances, excellent costumes, and a few surprising and delightful musical numbers make for terrific theatre.”