A few Department of Writing-related readings and book launches to add to your November calendars: 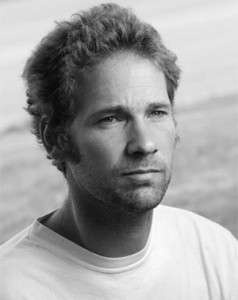 • Coastal poet and author Joe Denham will be the featured reader at the next instalment of Open Word: Readings and Ideas, followed by a live interview with Department of Writing poetry prof Tim Lilburn. (Open Word is a partnership between Open Space and the Department of Writing.)

Denham is the author of two poetry collections, Flux (2003) and Windstorm (2009), and one novel, The Year of Broken Glass (2011, all published by Nightwood). His work has appeared in numerous magazines and anthologies including Open Field: 30 Contemporary Canadian Poets, The New Canon: An Anthology of Canadian Poetry and Breathing Fire 2: Canada’s New Poets. Denham lives with his wife and two children in Halfmoon Bay, BC, and works as a commercial fisherman throughout coastal British Columbia. 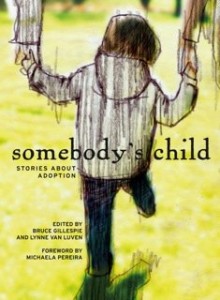 • Faculty of Fine Arts associate dean Lynne Van Luven will be among the dozen authors kicking off their new book as the annual fall collective push by the Heritage Group of Publishers (including Heritage House, TouchWood Editions, Brindle & Glass, Rocky Mountain Books and the Royal BC Museum). Van Luven will be debuting her latest effort, Somebody’s Child: Stories about Adoption. Also on the bill is alumnus Barbara Stewart, who will be reading from her book, Campie.

The festivities run 5:30 to 9:30pm on Thursday, November 17, at the Maritime Museum of BC in Bastion Square. Stewart will be on roughly around 6:45pm, while Van Luven will read at 7:30pm. 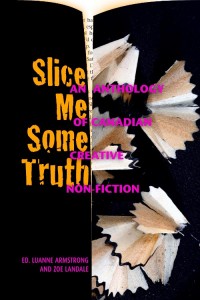 • Finally, Writing facutly members Madeline Sonik, just-nominated for the BC National Award for Canadian Non-Fiction, and recent Officer of the Order of Canada winner Lorna Crozier are both included in the new collection, Slice Me Some Truth: An Anthology of Canadian Nonficiton (Wolsak & Wynn). Described as “a ground-breaking survey of today’s creative nonfiction in Canada,” the 36 authors collected in Slice Me Some Truthcover memoir, personal essay, literary travel, nature writing, lyric essay plus researched literary journalism and cultural criticism; writers include the likes of Kate Braid, M.A.C. Farrant, Patrick Friesen, Wayne Grady, Mark Kingwell, Evelyn Lau, Charles Montgomery, Stephen Osborne, Harold Rhenisch and Andreas Schroeder, among many others.

Both Sonik and Crozier will be joining anthology co-editor Zoe Landale plus contributors M.A.C Farrant and Genni Gunn at the local launch at 7pm Thursday, November 24, at The Well, 821 Fort Street.