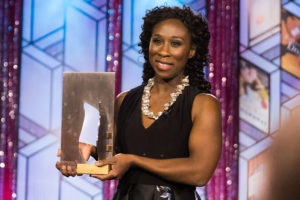 Edugyan wins $100,000 on this, the 25th anniversary of Canada’s richest literary award, and also earns the distinction of being one of only three authors to twice win the Giller Prize, alongside M.G. Vassanji and Alice Munro.

“I wasn’t expecting to win,” she told the audience as she collected the award & her $100,000 prize. “So I didn’t prepare a speech.” She did, however, go on to say that, “in a climate where so many forms of truth telling are under siege, this feels like a really wonderful and important celebration of words.”

You can congratulate Esi in person at a special Autographing with Esi Edugyan, from noon to 2pm Friday, Dec 7 at Munro’s Books, 1108 Government.

Nominated for the Man Booker Prize, the Rogers Writers’ Trust Fiction Prize, and the winner of this year’s Giller Prize, Esi Edugyan’s Washington Black is a wildly inventive portrayal of a young slave’s flight from Barbados alongside a mysterious inventor.

Edugyan previously won the Giller in 2011 for her sophomore novel, Half-Blood Blues. Indeed, having only published three novels (including her debut, The Second Life of Samuel Tyne), Edugyan’s back-to-back wins for Washington Black and Half-Blood Blues is doubly remarkable, especially when you consider both were shortlisted for the trifecta of fiction awards — not only the Giller but also the Man Booker Prize and the Rogers Writers’ Trust Fiction Prize.

The announcement was made on November 19 at a black-tie dinner and award ceremony hosted by television personality and author Rick Mercer, and attended by nearly 500 members of the publishing, media and arts communities. This year’s longlist, shortlist, and winner were selected by they five-member jury of Canadian writers Kamal Al-Solaylee, Maxine Bailey and Heather O’Neill, along with American writer John Freeman and English novelist Philip Hensher. 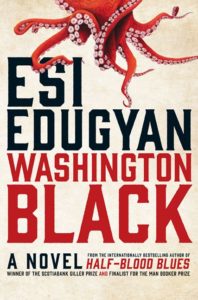 Of Edugyan’s winning novel, the jury wrote, “How often history asks us to underestimate those trapped there. This remarkable novel imagines what happens when a black man escapes history’s inevitable clasp — in his case, in a hot air balloon no less. Washington Black, the hero of Esi Edugyan’s novel, is born in the 1800s in Barbados with a quick mind, a curious eye and a yearning for adventure. In conjuring Black’s vivid and complex world — as cruel empires begin to crumble and the frontiers of science open like astounding vistas — Edugyan has written a supremely engrossing novel about friendship and love and the way identity is sometimes a far more vital act of imagination than the age in which one lives.”

Edugyan earned her BA in Writing department in 1999, and later taught some courses for the department as a sessional instructor. She is also married to fellow Writing alumnus Steven Price, who is also an acclaimed novelist and poet.

“I studied with so many great teachers at UVic,” said Edugyan in this 2012 interview upon being named one of UVic’s Distinguished Alumni. “The caliber of guidance was amazing. Patrick Lane was my first great teacher. I found myself following poetry because he was so inspiring. Jack Hodgins, Lorna Crozier, Bill Gaston . . . there was such a high level of instruction.”

Award-winning author and Writing professor Bill Gaston recalls that both Edugyan and Price were in the very first workshop he ran at UVic in 1998. “I’m sure never to say I ‘taught’ her, though,” he says with a chuckle. “I tried to stay out of her way, and not ruin things.”

The four remaining Giller finalists, who receive $10,000 each, include Patrick deWitt (who also lost to Edugyan in 2011) for French Exit, Thea Lim for An Ocean of Minutes, É​ric Dupont for Songs for the Cold of Heart, and Sheila Heti for Motherhood.

Media coverage of Edugyan’s win was extensive, of course, with notably pieces running in CBC News, the Globe and Mail, the local Times Colonist and CBC Radio’s All Points West, who interviewed Bill Gaston on Nov 20 but has yet to archive the story.

The Globe and Mail also published this interesting post-Giller piece, commenting on the award’s impact for the Canadian publishing industry. “The greatest relief through the room was that the assembled publicists would not have to battle to sell a 600-page book in translation about a small Quebec town,” wrote analyst Russell Smith. “This one sells itself.”