Join Us For A Literary Celebration of Lorna Crozier

For over 20 years, Lorna Crozier helped shape the future of Canadian poets and writers as a professor in the Department of Writing. Now, her legacy will live on in the form of the Lorna Crozier Scholarship for undergraduate writing students—and to help kick off the scholarship, a special fundraiser is being held at UVic on November 28. Featuring a veritable who’s-who of national and local literary luminaries, A Literary Celebration of Lorna Crozier promises to be one of the most memorable events of the fall arts season. 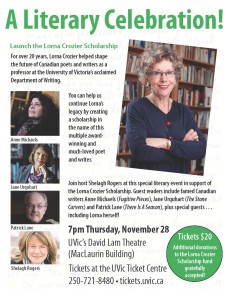 Each audience member will also receive a special poem, written for the occasion and signed by Lorna, that will be suitable for framing. Even Crozier herself will be on hand for the event!

(Interesting campus side-note: in additional to the many awards and accolades they have garnered over the years, Anne Michaels received an honourary doctorate from UVic in 2012, and Patrick Lane is receiving one in November just two weeks before the event.) 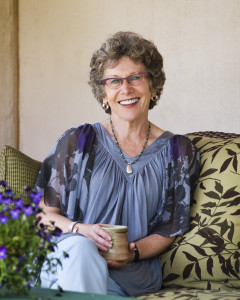 “Lorna’s a brilliant poet—we all know that—but she truly was a brilliant teacher,” says acting Writing chair Joan MacLeod. “Her legacy is already in our department in some of our amazing teachers—like Carla Funk and Steven Price, who were both students of Lorna’s and have gone on to rich writing and teaching lives. When I visit their classes now, I see Lorna through their approach to the classroom.”

During her time teaching at UVic, Crozier received both the Distinguished Professor designation in 2004 and the Craigdarroch Award for Excellence in Artistic Expression in 2010, in addition to being named a Fellow of the Royal Society of Canada in 2010 and receiving the Order of Canada in 2011—that’s in addition to her many, many other awards.

“I love the idea of the scholarship, just because it’ll be like having a little piece of Lorna still with us,” MacLeod continues. “She was infectious about her love of poetry—we got students into our department because of her name, but she also got students interested in poetry when it wouldn’t have otherwise been on their radar. It’s important to honour not just what she did for our students but what she did for the whole department.”

A Literary Celebration of Lorna Crozier begins at 7pm Thursday, November 28, in UVic’s David Lam Theatre (MacLaurin Building A144). $20 tickets are available now at the UVic Ticket Centre, with all proceeds (and any additional donations) going to the Lorna Crozier Scholarship fund.