Even during a normal year, it can be a challenge for our Visual Arts students to complete their degree requirements and present a finished body of creative work while also planning the annual BFA grad show—a student-organized public exhibition which normally attracts hundreds to campus.

This year, however, graduating students have had to grapple with both creating work under strict COVID conditions and the uncertainty of whether a physical exhibition would be permitted. The bad news? Less than a month before the exhibit’s opening date, student curators were informed that a public show would not be possible—but the good news is, they’ll be shifting it online for viewing by anyone, anywhere, as the annual BFA graduation exhibition, The End, will run online starting April 27. Despite a title like The End, however, don’t assume it’s a doom-and-gloom student reflection on being the pandemic class of 2021. “It’s almost sarcastic calling this The End, but it feels like a specific kind of world has ended,” says exhibition chair Nick Patterson. “We’re passing through the threshold into something new and different.”

Given the uniquely hands-on, often collaborative, nature of their program, Visual Arts was among the few departments permitted to run in-person this past academic year: 46 percent of their classes were offered on-campus from September to April, thanks to rigorous safety protocols.

“People have been working really hard to still make the work they want,” says graduating honours student Zoë Joyall. “There are many [of us] in the graduating class who make installations or performance-based work, which is directly impacted by COVID precautions and regulations. I feel really grateful that we do have the space to come together as a group, as a community . . . people who are doing school entirely on Zoom don’t have the same connections we are lucky enough to have.” Part of something special

Patterson agrees. “There are fewer opportunities to work together because of the restrictions, and yet we are still putting forth our best—and that is really inspiring to me,” he says. “There is definitely a feeling that we are part of something special.”

The online exhibition The End will feature work by 30 graduating students, ranging from painting, sculpture, photography and drawing to digital media, installations, multimedia and more. The exhibit is presented in both a remarkably interactive “Google maps” style walk-through of the gallery space, which allows you to not only a 360-degree view of the work but also find out more about each artist, as well as a more conventional catalogue.

“It has been a privilege and inspiration to see the students rally behind their vision with endless determination and a tremendous sense of community,” says supervising Visual Arts professor Jennifer Stillwell. “Any limitations have only inspired innovation.” As with any exhibition, subject matter will vary by individual artist. “I think a lot of the work deals with not just COVID, but working through trauma,” says head of curation Jasper Van Alderwegen. “Identity and mental health are huge themes, [as are] the end of isolation or an exploration of identity.”

Rather than discouraged, recent JCURA recipient and head of documentation Jamie Oosterhuis feels “incredibly inspired” by the work being exhibited in The End. “If you want to feel a sense of creativity and optimism during a time when everything feels very bleak—if you want to feel that connection to others in the arts community—that’s why you should view this show,” she says. “The End of a chapter means a new beginning.” That’s a sentiment with which Stillwell agrees.

“Even though the exhibition marks ‘the end’ of their degree program, spotlighting that moment in time will allow them to start the next scene—I am more than confident this next generation of visual artists will do so.”

You can view the full exhibit here via a remarkably interactive website which simulates the experience of walking through the gallery, but the photos below also offer a quick view of some of the work on display.

—with files by Grace Dillon 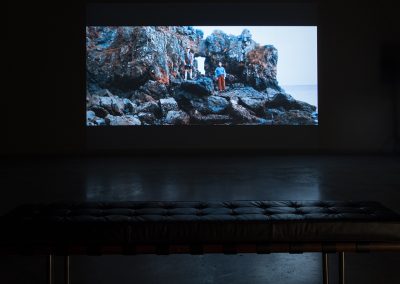 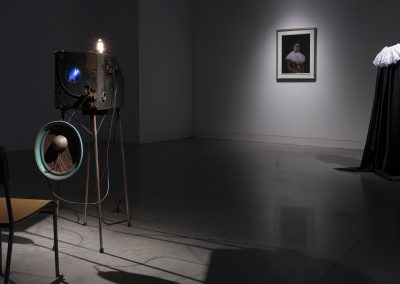 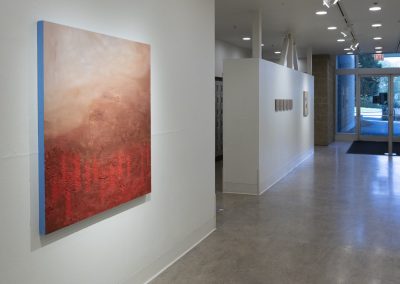 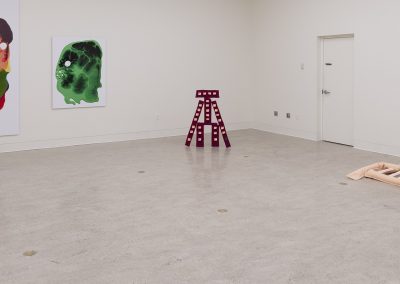 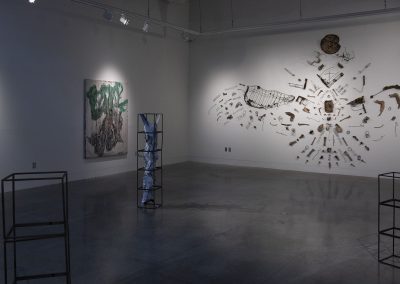 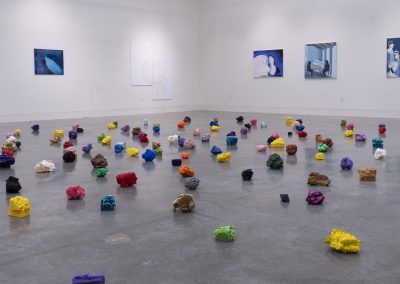 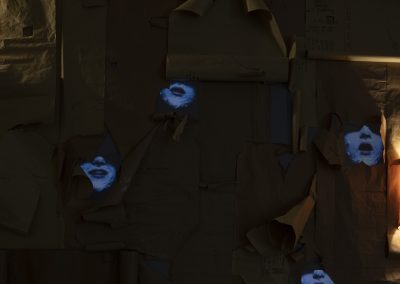 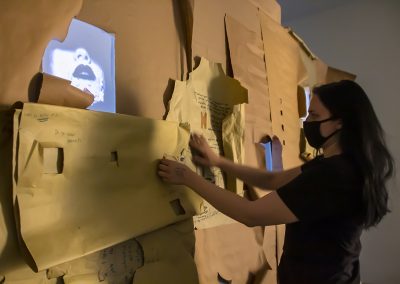 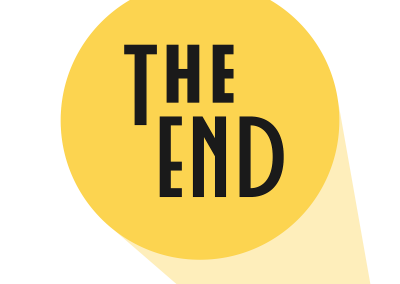 Dennis Gupa: from sea rituals to applied theatre and science The idea of artists working with scientists is nothing new to Dennis Gupa.

A PhD candidate in UVic’s theatre department, Gupa is also the current artist-in-residence with Ocean Networks Canada (ONC), a UVic initiative. He sees the artistic residency, launched by the Faculty of Fine Arts and ONC two years ago, as a natural fit with his doctoral focus on Indigenous sea rituals, climate change and sustainable ecology.

While Gupa’s term at ONC will wrap up this spring, he’s also finishing his doctoral work in applied theatre under the supervision of theatre professor Kirsten Sadeghi-Yetka, whose experience in community-engaged research includes projects in Indigenous language revitalization through theatre with children in the Downtown Eastside in Vancouver, young people in Brazilian favelas, young women in rural areas of Cambodia and students with special needs in schools in The Netherlands.

As with any applied theatre practitioner, Gupa also wants to use the tools of theatre and drama to help bring about social change and build a sense of community—and, in his case, to attempt to grapple with the gravity of global warming especially in the island nations of the world.

Strengthening connections between art and science

Sharing stories is exactly what Gupa has in mind with the ONC initiative: recently repositioned as an opportunity for Fine Arts graduate students, the ONC artist-in-residence program exists to strengthen connections between art and science, and ignite cross-disciplinary exchanges around the major issues facing oceans today.

“This residency program comes at a time of crisis in ocean sustainability,” ONC chief scientist Kim Juniper. “Science-art collaborations such as this one bring together the insight and power of two ways of looking at the world, and will hopefully lead to new understanding and greater benefits for our ocean and our future.”

“How can we share our stories with the scientists, and what does that mean to them to listen to immigrants?” Gupa ponders. “How does our history of exile connect with the history of climate disaster? We’ve never really tapped into that or discussed it in a scientific space.”

For Gupa, the ONC residency is less a challenge and more a cumulative opportunity between his artistic and academic pursuits.

“There’s a lesson in fluidity that this water is teaching me and I’d like to bring that to the fore in my work … it’s not just a fascination, but water is so embodied in my work as an artist. It’s beautiful but it’s also dangerous. We cannot wait any longer for inclusive and deeper collaborations to make things better for all living things in this earth—both seen and unseen.” Social justice for the seas

“When we think of the water, I think of social justice,” Gupa adds. “As an archipelagic country surrounded by water, the Philippines have been suffering from ocean disasters due to climate change: resources are depleting, coral are bleaching, fish are dying and the waters are warming so the fish don’t have food. So what do they do? They migrate, just like Filipinos—fish are the first climate refugees.”

Gupa has also been looking at how climate change has impacted Canadian Filipino diaspora communities, with whom he created and then toured a highly collaborative theatrical production in 2018 (Victoria, Vancouver, Winnipeg). Gupa performing the mask of Imelda Marcos during his production of “Murupuro”. (Photo: Fiona Ngai)

Having grown up in the Philippines, Gupa has witnessed firsthand the threat of extreme weather events. With his country being a former colony—extending across 7,600 islands and known for its maritime history, marine diversity and Indigenous population—the parallels between the Philippines and Vancouver Island are clear to Gupa. He says this is probably the reason he decided to do his grad studies at UVic.

“By looking at the experience and knowledge of local people—who have been experiencing these climatic events for so many years, but are not really given a lot of opportunities to tell their stories—we can learn from their knowledge and wisdom,” he says. “Our poetries and songs renew our kinship with the ocean.”

Gupa’s research focuses on traditional ways of knowing, as well as storytelling and applied theatre, and how these elements can be drawn into important discussions and dialogue in support of social justice, community participation and climate action. A youth theatre project in 2015 co-directed by Gupa for a rural high school “glee club” in the Philippines. (Photo: The Perfect Grey | ASEAN Center for Biodiversity)

He conducted field work in the Samar-Leyte region of the Philippines, working closely with local elders on the island community of Guiuan, where the super typhoon Yolanda in 2013—one of the deadliest on record—first made landfall.

In addition to collaborating with ONC at UVic, Gupa was a visiting graduate research fellow at UVic’s Centre for Studies in Religion and Society in 2019/20 and a recipient of a 2017 student research fellowship from the Centre for Asia-Pacific Initiatives at UVic. He is also a Vanier Scholar.

“Scientists spend hours in their labs thinking about their work, similar to what theatre and performance artists do in their rehearsal spaces,” he says. “We’re all exploring and searching for meaning; this kind of interdisciplinary conversation simply lets us be better adjusted to global issues.”

Gupa also spent a decade at the University of the Philippines Los Baños where, in addition to teaching theatre, he was named the first head of the Office of Arts and Science Fusion Program.

In 2011, Gupa received a grant from the Asian Cultural Council (established by John D. Rockefeller III) for six months in as the director-in-residence with Ma-Yi Theatre Company in New York City.

His collaborative work has also won support from the British Columbia Arts Council, the Canada Council for the Arts, World Bank Manila Office/Australian Agency for International Development, ASEAN Centre for Biodiversity and the Dharmasiswa Scholarship through the Indonesian government’s Ministry of Education, among many others.

Gupa has an MFA Directing (Theatre) degree from UBC and an MA (Theatre) from University of the Philippines. Follow the social media feeds of both Fine Arts and ONC for developments on the artistic residency this spring.