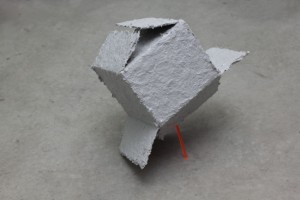 When is a box not a box? When it’s part of a sculptural exhibit by Daniel Laskarin, of course. Laskarin, current chair of UVic’s Visual Arts department, recently wrapped up his first survey show at the Art Gallery of Greater Victoria. Titled Agnostic Objects (things persist), Laskarin’s 10-year survey offers not only the gallery’s latest glimpse into Victoria’s burgeoning contemporary sculptural scene but also affords viewers the opportunity to reengage with contemporary art in general. But if you find yourself feeling a little baffled by some of the pieces, don’t feel bad—it’s all part of the artist’s concept.

“Laskarin has a stated interest in doubt and uncertainty, which he sees as important qualities in his work,” notes AGGV director Jon Tupper in the introduction to the 96-page, full-colour glossy catalogue for Agnostic Objects. “He believes viewers become creatively engaged when they can’t easily identify objects.” Thus, an apparently simple box becomes the basis for “Butterfly Trap,” a playful Wile E. Coyote-style piece that sets out to capture the viewer’s imagination.

“I celebrate uncertainty as a positive and creative process,” explains Laskarin. “Uncertainty, without letting it become paralyzing, is profoundly important; it’s where criticality begins, where change begins. These objects have a relationship with the outside world that is uncertain; there are little hooks, little gestures, but it’s not clear.”

What is clear, however, is the essential role of the viewer in relationship to these Agnostic Objects. “His artistic practice is stimulated by propositions and investigations, which are intentionally left unresolved in the objects he produces,” notes Nicole Stanbridge, the AGGV’s associate curator of contemporary art. “Consequently, the objects allow for thoughtful consideration on the part of the viewer.”

It also allows for thoughtful consideration on the part of the artist. “It is kind of a landmark,” Laskarin says about the survey exhibit. “It gives you a real opportunity to look over your own development from a bit of distance. And it’s good to have had the exhibit up for four months, as I was working on a lot of the works right up to the time it opened—so while it’s a survey exhibition, there’s a lot of new work that hasn’t been shown before. And it creates a platform for the next development.”

Indeed, with four pieces of the 21 pieces on view made specifically for this exhibit and another five having been “modified, reconfigured or changed” since their initial creation between 2000 and 2010, Agnostic Objects offers a range of work that can, depending on your perspective, be seen as delightful, challenging or downright perplexing.

“A lot of the works aren’t that easy to approach, but it’s contemporary work, it’s experimental work,” he explains. “Just like experimental physics, some of it is quite esoteric. The great thing about art as a practice is that it lets you think about things as seriously and deeply as you’re able.” 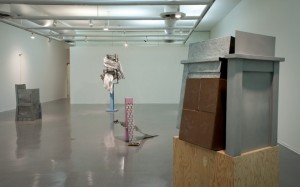 Laskarin readily admits there’s room in the art world for “comfortable, recognizable, familiar” pieces, but also points out the necessity of universities to be creating “stuff that is more leading edge . . . for us to be doing populist work here would be a betrayal of the whole research character of our university.”

And when it comes to experiencing his work first-hand, Laskarin paraphrases famed art historian E.H. Gombrich. “He made the statement that when you enter an exhibition, each work of art you see is like encountering another consciousness. Once you recognize that, it changes the entire way you look at a work of art—it’s not necessarily about art as self-expression, or art as a statement about something; instead, it’s like meeting another person.”