Conversations, negotiations, collaborations — while these are the kind of skills often associated with the realms of politics or business, they can also be essential abilities for a particular kind of artist. 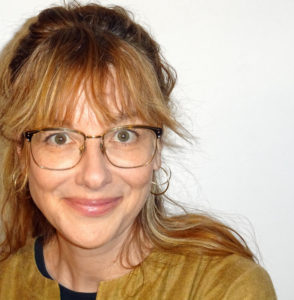 Count Althea Thauberger among the latter. A gifted artist, filmmaker and educator with an enviable international track record, Thauberger’s art practice involves performative and collaborative processes resulting in the production of social documents. These documents can range from performances and films to books, videos and audio recordings, and they often necessitate lasting engagements with the communities and sites where they are produced.

Currently Artist-In-Residence in Photography at Concordia University and represented by Toronto’s Susan Hobbs Gallery, Thauberger received her MFA from the Department of Visual Arts in 2002 and is now the recipient of the 2017 Distinguished Alumni Award for the Faculty of Fine Arts

“It’s such an honour to be chosen to come back to the department for this recognition,” she says. “I really changed a lot during my years at UVic — it was a time of transformation and political awareness for me, a time of really thinking about what it means to be an artist in the world.” Thaubeger offers a short laugh. “We’re in a similar moment now, but this seems reflective of the circles that happen in life.”

But Thauberger also has the distinction of being the first Fine Arts MFA to receive the award. “We are very pleased to select Althea as a Distinguished Alumni,” says Visual Arts Chair Paul Walde. “Through its focus on intensive studio practice and interdicipinary practices, UVic’s Visual Arts department has developed a reputation for contributing to the careers of some of the best interdisciplinary or genre-defying artists working today — of which Althea Thauberger is an exemplary example. She has garnered international attention for her socially engaged projects, which often incorporate video, photography and performance in powerfully evocative yet contemplative works.”

A way of looking at the world 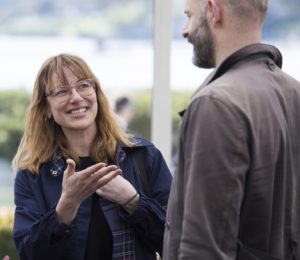 Thauberger originally came to UVic to do her first year of a general arts degree with an emphasis on philosophy and history — two early passions that still fuel her work — before switching focus to Visual Arts; and while she transferred to Concordia to complete her BFA, she came back to UVic to pursue her MFA.

“I knew Visual Arts had a strong program and an interdisciplinary focus,” she says of her decision to return to UVic. “They had great support for students and there were artists I wanted to work with. It just felt like the right department for me.”

Foremost among those faculty members was Fred Douglas. A documentary photographer who specialized in the narrative possibilities of constructed scenes, Douglas furthered the photography program originally established at UVic by Roland Brener.

“Fred was very influential to me—he was like a mentor,” she says. “His work was really concerned with theory and history. He had a way of looking at events happening around him, a way of thinking about things that shaped our reality and our imagination. Through working with him, I saw a crossover of many aspects in life and work that were pretty inspiring — being engaged and unsettled with the world, and bringing that into all aspects of your work, including teaching.”

Looking at the world a particular way has permeated Thauberger’s own work. Her film and video installations are often the result of long-term negotiations and collaborations with those depicted — including subjects as diverse as religious choir members, tree planters, conscientious objectors, teenage singer/songwriters, female combat soldiers in Afghanistan, speakers of endangered languages and US military wives. As this Canadian Art magazine article noted, “Thauberger offers varied perspectives on the impact of individuals and groups on the margins of historical or cultural awareness.”

Such works have resulted in her being shortlisted for the 2004 Sobey Art Award and the 2011 Grange Prize, and having pieces featured in numerous national and international exhibitions, including the National Gallery of Canada, the 2012 Liverpool Biennial, the 2010 Biennale of Sydney, China’s Guangong Museum of Art, Copenhagen’s Overgaden Institute of Contemporary Art, Belgrade’s occupied Kino Zvezda, and numerous other exhibition spaces.

“I’ve been very fortunate to create commissioned projects, supported by various organizations and institutions, but each work and each relationship is different,” she explains, “You always have to negotiate the institutional landscape and local community to learn and find support. Its crucial to cultivate a critical self-awareness of the privilege of the position you occupy, of the responsibilities to communities, and then how to push back in a productive way with regards to institutional interests . . .” 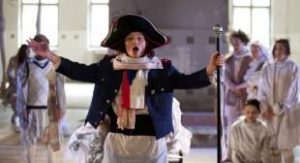 Despite such international acclaim, Thauberger admits that a career as a working artist isn’t always easy. “It’s often a struggle,” she admits. “There are times when you feel really supported and everything seems to be falling into place and other times when it’s quite the opposite and you feel like you might never make another work.” She pauses and laughs philosophilcally. “You have to find a way to deal with those ups and downs throughout your career.”

Advice for the next generation

While back at UVic during Alumni Week, Thauberger will also be speaking to current Visual Arts students, both at the undergrad and graduate level. What advice does she have for the new generation of students and emerging artists?

“It’s important for students to make best use of the kind of amazing opportunity of being surrounded by students and faculty who are there to support you and help you develop,” she says. “I always try to impress upon students that this is where their community begins: developing your work in relation to your peers is what’s going to keep you going once you’re out of school. It’s essential to build those discursive relationships, for example, to start writing about each other’s work — that’s how you make a scene, that’s how you build support.”

And, as a teacher herself now, is there something she keeps in mind when she’s working with a class? 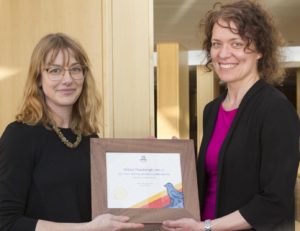 “Not to forget what it’s like to be a student,” she chuckles. “As much as it is a privilege, its also  really tough to be an art student — art students have to learn how to make things out of nothing; there’s no rote, no guide like in other disciplines, and everyone’s path is different. And that can be terrifying, as it can be when you have to stand beside your work as you’re being critiqued and not take it personally. I certainly struggled as a student, and now I can mine those experiences to have more understanding. And I will never forget the teachers that were especially inspiring; they are still an example to me.”

Finally, is there anything she wished she had been told as a student?

“You need to develop practical skills: how to negotiate, how to stand up for yourself and your peers — especially for women artists. Despite the fact the majority of art students identify as women and are quite culturally diverse, when you look at the dominant careers here in Canada, the art world — like most other worlds — it’s  largely white male voices. It’s important to find ways to make space and take space with confidence and solidarity.”